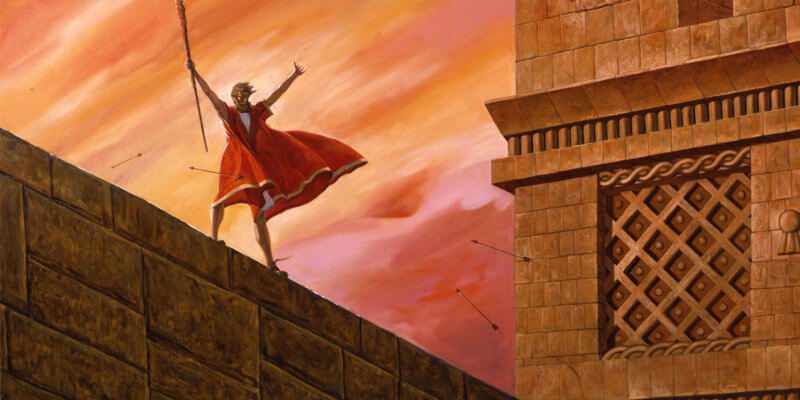 We see this brief introductory note in Helaman 13, “the Nephites did still remain in wickedness, yea, in great wickedness, while the Lamanites did observe strictly to keep the commandments of God, according to the law of Moses.” (vs.1)

Then something unexpected happens in the Book of Mormon. We hear the voice of a Lamanite preaching repentance to the Nephites.

Samuel the Lamanite’s words are important for many reasons.

We have evidence that God will choose prophets and preachers of repentance from wherever He pleases and not simply from the so-called “chosen” population. In this case in the Book of Mormon, we would expect the Nephites to be the message bearers of salvation. Instead, a member of the Lamanite community, a community that has caused so much difficulty for the Nephites throughout the Book of Mormon.

Samuel the Lamanite returned to preach after he had been rejected by the Nephites and thrown out of the city. How many of us are willing to endure to the end in the face of difficulty, criticism, and rejection?

Samuel spoke from the heart, extemporaneously, without a pre-formed script. I can imagine that in his originally preaching, Samuel had prepared talks or speeches. But after God commanded Him to return, He did so without a plan. How many of us are willing to follow the Lord without a plan? How much faith do we have to act before we know what is best?

Samuel was willing to do the unexpected. When barred from the city proper, he creatively found an alternative to sharing his message. Are we willing to be creative and resources to accomplish righteous objectives?

Samuel spoke clearly and forcefully of the coming of Jesus Christ. Of all the things that someone could teach that is true, speaking of Jesus is the most important. If you had 5 minutes at the world microphone, what would you say?

The most detailed prophecies anywhere in the Book of Mormon are those shared by Samuel the Lamanite. Amazingly, of all the prophecies in the Book of Mormon, no other prophet spoke with more precision and clarity about the timing of the coming of Jesus Christ. Take some time to review specifically what he taught in Helaman and then review 3 Nephi to see how those were fulfilled.

Samuel’s words are the only ones from Book of Mormon preachers specifically identified by Jesus Christ during his visit to the people of Lehi that needed to be included. What does that suggest about the importance of Samuel’s words that Jesus wanted to ensure that they were recorded and preserved?

Samuel did not seek fame and fortune. Once he was done sharing the message that God inspired Him to share, Samuel left Nephite lands never to be heard of again. How many of us believe it is our job to ensure that God’s word is fulfilled? Or are we willing, like Samuel, to let God do His work after we have fulfilled His callings to us?