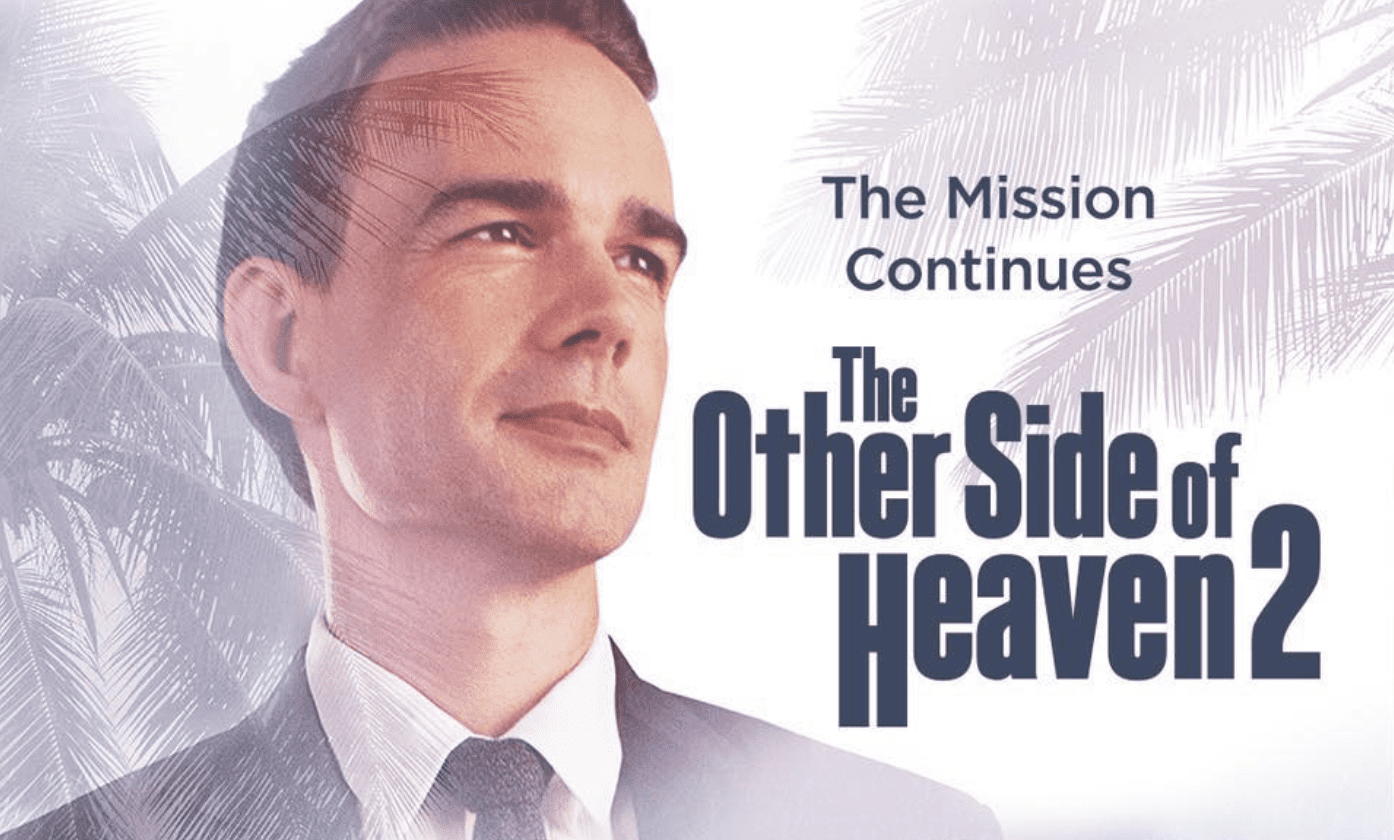 For daily coverage of Hollywood from a believer’s perspective,follow me on Facebook.

Mitch Davis is something of a legend among Latter-day Saint film buffs. Not only did he direct the highest-grossing film about the Restored Gospel with The Other Side of Heaven, he’s directed Hollywood stars like Anne Hathaway and Patrick Stewart and worked on hits like The Rocketeer, Newsies, Dead Poets Society, and White Fang. This summer, he returns with most of the original cast for The Other Side of Heaven 2, a film he’s discussing (with behind-the-scenes clips) at this week’s LDS Film Festival, Saturday at noon at the SCERA theater in Orem, Utah.

Mitch was kind enough to answer my questions regarding the film, miracles during production, replacing Anne Hathaway, and how the sequel aims to top the original.

First of all, I’m so excited that we’re getting a second film! After all this time, why now?

This is a project that has been under consideration for many, many years.  Elder Groberg felt an obligation to President Monson to tell this story on the big screen, but I did not want to produce a sequel unless it could rise to or surpass the level of the original in terms of production value.  The first movie looked and felt like an epic, studio film and I was unable to promise Elder Groberg I could deliver the same kind of major motion picture until we discovered a 47% production rebate offered by the government of Fiji.  All of the sudden we had two dollars for every dollar we spend in Fiji, and for ever Fijian dollar we spent we actually had four dollars because the Fiji dollar is so devalued.

I did not want to tell this story small because it is a big, sweeping story.  But I think we succeeded.  I think the new movie will actually end up looking and feeling like larger scale production thant the first.  Hopefully Elder Groberg and President Monson will both be pleased with the end product.

As I understand it, just as The Other Side of Heaven was based on Elder Groberg’s book In the Eye of the Storm, and this second film is based on his follow-up book, The Fire of Faith. What is it about these stories that made you want to adapt them into films?

There is something irresistible about Elder Groberg and his faithful, kind way of looking at the world and other people.  So I am thrilled to be working with him and his family again.  They are lovely people.  But they are quite different movies.  The first film focuses on John’s personal odyssey in Tonga in the 1950’s whereas the sequel tells the true story of his return to Tonga nine years later with a wife and five young daughters to preside over the Tonga-Fiji Mission.  Both are stories of inspiring faith and works, and we all have a lot to learn from the Tongan characters populating the film.  I think we all have a lot to learn from the Pacific Islanders about what it means to have a burning, fiery faith, which really comes in handy in a lot of situations.

Christopher Gorham has stayed in the public eye with mainstream shows like Covert Affairs and Ugly Betty. What was his reaction when approached to do this character again in a faith-focused film?

It took me a few years and attempts to get Chris to consider reprising this role.  His career was and is very active.  He likes to be at home with his wife Anel and their three children as much as possible.  And we wanted him for three months in Fiji while his kids were all in school.  In the end, Chris’s schedule opened up in a most dramatic way and he called me to tell me he had reached the conclusion God must really want him to make this film because everything else he had on his docket mysteriously disappeared.

Obviously Anne Hathaway hit it big shortly after The Other Side of Heaven. With her schedule tied up (and, no doubt, her salary), how did you go about recasting the essential role of Jean Groberg? What can you tell us about the new actress?

Anne is phenomenal, obviously, but was not an option for a variety of reasons, most of them financial. So we hired a lovely actress from New Zealand, Natalie Medlock, to take the part of John’s wife, Jean and, perhaps more importantly, the mother of the five little girls the Grobergs brought with them to Tonga.  She is a fantastic actress who delivered a remarkable performance.  Other than notoriety for the film, I don’t think we missed anything for Anne not returning to do the sequel. That’s not a knock on Anne, it’s a compliment to Natalie.

You were back on location for this film. Where did you shoot and what was that like? What are the pros and cons of shooting in the tropics?

I was down in Fiji for five months pre-producing and producing this film.  We started working there during the middle of summer but, gratefully, remained for the two fall months that followed the oppressive heat wave of the first two months.  I learned it is hard to get anything done fast in the oppressive, humid heat of Fiji, and we just had to learn to adapt to that fact.  But the benefits of shooting in that magical, authentic location, and getting those locations up on the wide-screen — they made all our sacrifices worthwhile.

The miracles during production of The Other Side of Heaven are well-documented. Did you see the hand of the Lord again this time? How?

We had a class four cyclone headed directly for our set the first day of production.  We went to work and started shooting even though the rest of the town was boarded up.  We called a Tongan Area Authority in Suva named Elder Johannson and asked him if he come out and give our movie a blessing.  He did so in Tongan and, apparently, he rebuked the elements.  The storm made a bit of a U-turn after Elder Johannson’s blessing and blew itself out over the ocean, rather than destroying our sets and locations as it most certainly would have.

What is the mission of this film? What is its purpose?

As with the first time, we want to communicate the spirit of Elder Groberg, the spirit of the Tongan people, and the Spirit of the Lord, with a big emphasis on the power of faith and the importance of hanging onto our faith when the going gets tough and nothing seems to make sense.

In what ways can our readers get involved in promoting The Other Side of Heaven 2?

Our needs vary in different parts of our country.  This is a major motion picture opening on hundreds of screens across the U.S. on June 28th.  We need our movie to open very big inside those theaters that weekend so it will be able to remain on the big screen a few more weeks.  So, absolutely,  we need volunteers in every town with a theater to help us whip up enthusiasm for opening weekend.  They email us at [email protected], or they can reach out to us on Facebook.

The bottom line is we need an army of movie promoters for opening weekend all across the U.S.  And we also need people to put large groups of friends together to go see the movie.  We also have a number of great Facebook assets that can be passed on to one’s social media friends and family.  Basically, just get the word out and get people in the car and go, for goodness’ sake, go opening weekend and help our movie excel to the point that it is assured worldwide distribution after its theatrical release in the U.S.

You’re presenting on the film Saturday at noon at this week’s LDS Film Festival at the SCERA Theater in Orem. What can attendees expect and why do our readers want to be there?

I want to issue a clarion call for LDS filmmakers to start thinking big.  I think we are consistently aiming too low to make a difference outside the narrow confines of our own faith, and I think that, as a result, we have lost our ability to be perceived as the owners of our own story.  We have abdicated our responsibility as tellers of our own story and history and, as a result, are forced to sit around watching our detractors define us.  That is a sad state of affairs and I want to convince everyone in attendance we can and should do much better.  We need to start making movies for much larger audiences so we can afford to make bigger and better movies.  Small ball isn’t cutting it anymore.