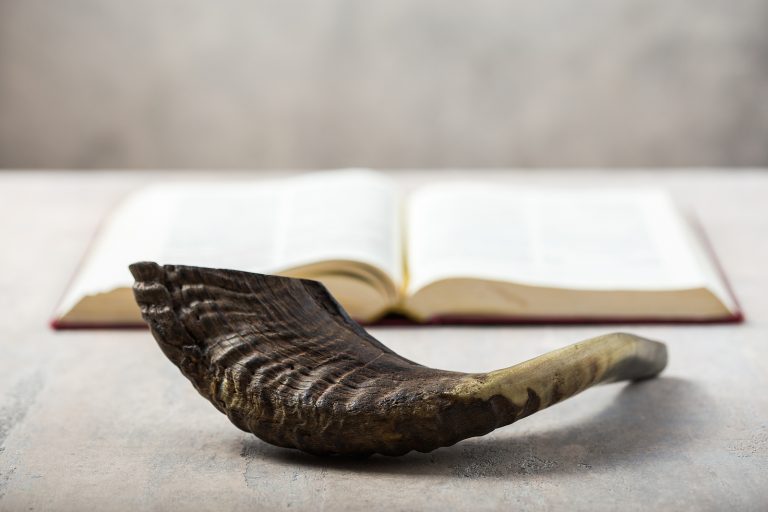 Editor’s Note: Rosh Hashanah began this past Friday, September 18. We are currently in the ten days leading up to Yom Kippur that are mentioned in the article below.

An excerpt from Gathered in One: How the Book of Mormon Counters Anti-Semitism in the New Testament by Bradley J. Kramer

Although the Book of Mormon does not mention Rosh Hashanah by name, the observances and ideas traditionally associated with this festival resonate remarkably with the initial context and impetus of Book of Mormon. The Book of Mormon begins, after all, at “the commencement of the first year of the reign of Zedekiah” (1 Ne. 1:4)—a phrase consistent with Rosh Hashanah, or “head” of the year.

This holy day, although occurring during the seventh month of the Jewish calendar, nonetheless celebrates the start of a new year, much as college commencement services officially begin post-graduate life sometimes months after such a life has already begun. However, unlike college commencements and secular New Year’s celebrations, this “Jewish New Year,” as Rosh Hashanah is sometimes called, is not a period of celebration and revelry. Instead Rosh Hashanah initiates a period of intense self-examination called Aseret Y’may T’Shuvah, or the “Ten Days of Repentance.”

During these days, observant Jews prepare for Yom Kippur, or the Day of Atonement, by making themselves right before God, a process that not only requires that they ask God for forgiveness but demands that they review their behavior during the past year, identify any harm they may have inflicted upon others, and actively seek to remedy that harm. As Rabbi George Robinson writes: “Traditionally, Jews will ask their friends, family, and colleagues to forgive them for transgressions they may have committed in the previous year. God may pardon our transgressions against the Eternal, but only a person who has been sinned against may forgive one who traduced her.”[1]

Consequently, Rosh Hashanah, for many Jews, is a day where they are alerted to the reality of their need to repent. In services, a shofar, or ram’s horn, is sounded several times in order to rouse them from their moral slumber and wake them to the need to improve in their lives. The sermons delivered on this day similarly stress the necessity of repentance. As Rabbi Hayim Halevy Donin writes, “the Sabbath which falls during this ten-day period is known as Shabbat Teshuvah, or the Sabbath of Repentance,”[2] and it is devoted to this subject. Indeed, as Rabbi Robinson explains, “even before it became the custom for a rabbi to sermonize regularly, this Shabbat was marked by a sermon, often given by a leader of the Jewish community, exhorting Jews to repent.”[3]

It is therefore consistent with this ten-day period of intense self-scrutiny that there came at the beginning of the Book of Mormon many prophets to Jerusalem, “prophesying unto the people that they must repent” (1 Ne. 1:4). It is also consistent with this period that Lehi would then go forth and pray “unto the Lord . . . in behalf of his people” (v. 5). According to Rabbi Wayne Dosick, in addition to the sermons, the prayers during this time similarly “revolve around evaluation of conduct and behavior in the year just ended, repentance for mistakes, and transgressions, and seeking forgiveness from fellow human beings and from God.”[4] Rabbi Robinson writes: “Selikhot prayers [penitential prayers] are read before the morning service and Avinu Malkeinu (Our Father, Our King) is recited after the Amidah.”[5] One such selikhah from the Amidah reads:

Forgive us, our Father, for we have sinned,
Pardon us, our King, for we have transgressed,
For Thou art a pardoner and forgiver.
Blessed art Thou, Lord, Gracious One who forgives abundantly.[6]

Like most Jewish prayers, these prayers are expressed in the first-person plural and as such unite the supplicant with all Israel. Though individual sins are of paramount importance, individual Jews do not often ask for forgiveness for these alone; they plead instead for forgiveness for all of Israel’s sins. As Rabbi Donin writes, such prayers, like Lehi’s for “his people” (v. 5), very much affirm the very Jewish “principle of mutual responsibility and concern.”[7]

In addition to the fact that Lehi prays for his people, what happens to him afterwards similarly resonates with Jewish traditions associated with the period between Rosh Hashanah and Yom Kippur. As he prays, Lehi experiences a vision so powerful that “he did quake and tremble exceedingly” (v. 6). He is overcome and returns to his home to rest. He receives none, however, and instead is carried away in another vision in which he sees God “sitting upon his throne, surrounded with numberless concourses of angels,” all singing praises unto Him (v. 8). During this vision, one of the angels descends from this heavenly court and gives Lehi a book to read (v. 11). The words he reads are full of condemnation and chastisement, as well as predictions that Jerusalem “should be destroyed” and that many of the inhabitants “should perish by the sword, and . . . be carried away captive into Babylon” (v. 13).

This view of God and his relation to the city of Jerusalem is identical to the way religious Jews traditionally picture God and his relation to them on Rosh Hashanah. According to Rabbi Dosick, Jews visualize God at this time as a king “sitting on the Throne of Judgment, on the Day of Judgment, writing the fate of each individual for the coming year in the Book of Life.”[8] The idea is that during this ten-day period the Book of Life is open and will not be closed until after Yom Kippur. In other words, the judgments written down in this book can yet be altered. Sincere repentance can change God’s mind and modify one’s future. As a result, during this time prayers such as these dominate synagogue services:

Remember us unto life, O King who delightest in life, and inscribe us in the Book of Life so that we may live worthily for Thy sake, O Lord of life. . . .

O inscribe all the children of Thy covenant for a happy life. . . .

In the book of life, blessing, peace and ample sustenance, may we, together with all Thy people, the house of Israel, be remembered and inscribed before Thee for a happy life and for peace. Blessed art Thou, O Lord, who establishest peace.[9]

In keeping with these prayers, the traditional greeting for Rosh Hashanah is L’shanah tovah tikatevu, or “May you be inscribed (in God’s Book of Life) for a good year.”[10] Much like the people of Nineveh in the book of Jonah (the biblical book traditionally read on Yom Kippur[11]), traditional observant Jews hope that they can elude destruction and death by repenting, honestly and sincerely. Lehi too has the same hope for his people. After he has experienced his terrible vision of Jerusalem’s demise, he exclaims:

Great and marvelous are thy works, O Lord God Almighty! Thy throne is high in the heavens, and thy power, and goodness, and mercy are over all the inhabitants of the earth; and, because thou art merciful, thou wilt not suffer those who come unto thee that they shall perish! (v. 14)

Such an enthusiastic reaction does not make sense unless the fate of Jerusalem has not yet been sealed. The Book of Life must still be open. There is still a chance that what is written in it can yet be altered. Otherwise, Lehi’s praise of God’s mercy and his description of God as merciful is senseless, even cruel. In this way, the Book of Mormon not only connects with Rosh Hashanah, but this connection helps explain what is going on in it.

An excellent article! I am persuaded that Rosh Hashanah is a better setting for the timing of Lehi's departure than my previous assumption, which was Passover. One interesting clue perhaps, which I just noticed, is that they reach the Land Bountiful 8 years after leaving Jerusalem (1 Ne 17:4). This could be understood as exactly 8 years (or nearly exactly). If they left Jerusalem around Rosh Hashanah, this would put them arriving at Bountiful around then too. This is an intriguing possibility because the next verse mentions fruit and honey! Shana Tovah!