Detroit News Op-Ed: NAACP and Church Leaders Stand on the Side of Solidarity | Meridian Magazine 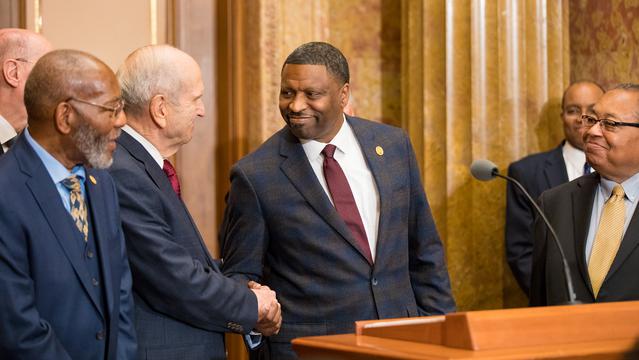 Detroit News Op-Ed: NAACP and Church Leaders Stand on the Side of Solidarity

President Russell M. Nelson’s speech tonight in the same space in Detroit where Martin Luther King Jr. spoke and marched 56 years ago reflects the spirit of solidarity that has long been imbued in the work of the National Association for the Advancement of Colored People (NAACP). So say Karen Boykin-Towns (NAACP Board of Directors vice chair) and Sister Sharon Eubank (first counselor in the general presidency of the Relief Society of The Church of Jesus Christ of Latter-day Saints) in a Sunday op-ed in The Detroit News.

“The NAACP is demonstrating once again that it stands on the side of collaboration and cooperation,” the duo write of the NAACP’s invitation to have the Church leader speak at its 110th annual national convention at the Cobo Center (formerly known as Cobo Hall). “And, at a time when we have too many social divisions and partitions, this emerging partnership between the NAACP and the Church echoes, in some small way, King’s call in Cobo Hall to transform ‘the jangling discords of our nation into a beautiful symphony of brotherhood.’”

The NAACP-Latter-day Saint partnership has blossomed over the past 18 months. The groups have met several times to pursue joint education efforts in Chicago and San Francisco and employment initiatives in Houston and Charlotte, North Carolina. They have customized the Church’s self-reliance services materials and programs to be most effective for the initiative.

The collaboration’s initial results are promising, Boykin-Towns and Eubank write.

“I now have tools and resources to better manage my money (and save for family goals),” they report one participant saying. “I feel like I can stop living off of the payday loan people. I thought I would never get out of that trap,” another said. They also mention the NAACP’s partnership with Brigham Young University’s law school (sponsored by the Church) on an initiative that leverages the school’s alumni lawyer network to assist people — pro bono — with minor legal issues before the courts.

“The partnership has become something of a parable in what coaction can accomplish in an era too often marked by division,” Boykin-Towns and Eubank say.