Da and Angélique Tarr: A Story of Powerful Faith in the DR Congo | Meridian Magazine 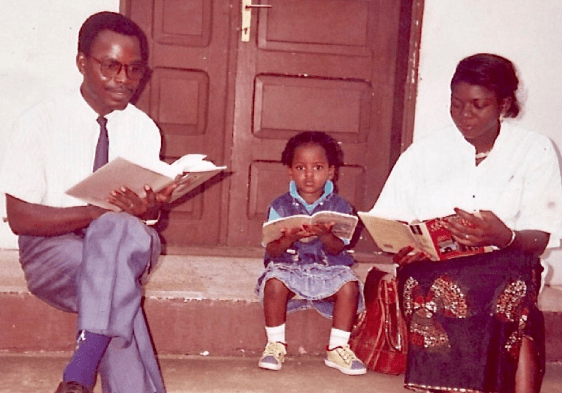 Da and Angélique Tarr: A Story of Powerful Faith in the DR Congo

Author’s note: This series shares six stories about Latter-day Saints from the Democratic Republic of the Congo. Each story is framed in the context of a Christlike attribute. The story of Da and Angélique Tarr is an adapted and expanded from part 1 of a presentation given at the FairMormon 2018 Conference. The video version of the entire FairMormon presentation is available on the FairMormon YouTube channel at https://www.youtube.com/watch?v=nJl9FvLKmjw.

In this article, I will share some incidents from the lives of Da and Angélique Tarr, whose examples illustrate the power of faith.

This is a photograph of Nyeda Chea, Da’s biological mother. Da grew up in Liberia. His name was originally “David,” the name of the uncle who raised him, but, when a second brother came along, the uncle split the name in two to be fair. The original “David” became “Da” and his brother was named “Vid.”

During a military coup in Liberia, Da was beaten by soldiers who broke into their house and his back was seriously fractured. His brother Emmanuel was killed. The family scattered to parts unknown and he was left on his own.

In, 1964, Angélique’s father returned to the DR Congo. There, he became a national deputy in the parliament. In the prolonged warfare that continued after Congolese independence, he was arrested and jailed. Angélique remembers hiding in the bush as a toddler with their family to evade soldiers. Her family was not amused when she would innocently imitate the loud sound of gunfire each time it was heard.

In 1986, Angélique came to live with her sister’s family in Monrovia, Liberia, where her husband had been sent as a Congolese diplomat. Angélique worked her way through her university studies by sewing. She tells her conversion story as follows:[i]

One day I came across a lady who was a member of LDS church who invited me to her church on Sunday. … I was very excited to go because I didn’t want to join the church that my sister’s family was attending. I wanted to try something new. That Sunday I felt so happy at the LDS church. The opening hymn was ‘I Know That My Redeemer Lives.” This song just helped me to be converted. Since that day, I didn’t miss one Sunday at church. I remained active and tried to practice the teachings in my life.

At home, everyone was watching me and admiring me. One day my brother-in-law said to his wife, “I notice that Angelique is very committed to that church. Can we go with her this Sunday and see why she is so serious and changing her behavior?” We went to church and they also got interested in the teachings, especially the plan of salvation. They became serious but couldn’t decide to get baptized until their first daughter (who was going every Sunday with me) decided to get baptized at the age of eight. Her parents gave their permission. After a short while, they also decided to become members. Since then, they love the church and all their children are members. Their three boys served full time missions and got married in the temple. Their first daughter who got baptized at eight years old also got married in the Logan temple.

Da was baptized a month after Angélique and, due to the persistent encouragement of a senior missionary couple, they became better acquainted. On the 31st of March 1990, Da and Angélique were married by the mission president, Miles Cunningham, in the branch meetinghouse.

Angélique and Da enjoy the flowers in back of their home soon after their wedding, spring 1990.

Da was happy to serve but balked at the idea of moving to the mission home. He and Angélique had just moved into their own home. They loved their small garden, pictured here. They pleaded with the mission president to allow them to stay, but in the end followed the counsel of their leaders. Da later recounted:

After we moved to the mission home, our own house was bombed. …

[Some of the rebels who knew me] saw the war as an opportunity to kill me. …

The rebels who bombed our house went back to their group rejoicing. … They said they had killed me, my wife, and our baby.

Da remembered gratefully: “We were blessed through our obedience in leaving our home.”

Da and Angélique hold a Family Home Evening on the porch with their daughter Messah after their return to Monrovia in 1992.[ii]

Conditions in the mission home became difficult. Da and Angélique were stranded for about three months without water. They survived by catching rain water in a leaky sink. And to make matters worse, Angélique was expecting their first child.

As rebels advanced to the capital city of Monrovia, they knew they could wait no longer for the baby’s delivery. Da drove Angélique through roving groups of soldiers to the hospital. The doctor quickly induced labor and Da picked up the mother and baby the next morning. Soon afterward, the rebels closed the road, broke into the hospital, and chased everyone out.

Although the baby was not eligible for evacuation by the US Embassy because she was technically Liberian, Da and Angélique pleaded and prayed and, to their great joy, an exception was granted. Angélique and the baby were transported by helicopter and boat to Freetown, where President Cunningham provided lodging. Da saw this incident as “another testimony that God helps us.”

Some of you have seen the LDS film Freetown that tells about the evacuation of a group of missionaries from Liberia during its civil war. With President Cunningham absent, Da had to make arrangements with the Liberian government to allow these missionaries to leave for Sierra Leone. Rather than going with them, he stayed in the mission home so he could be available to communicate with the government military commanders if there were problems en route.

About a month after the missionaries left, Da went out from the mission home, desperate for food. He did not know that he was a wanted man. He was arrested and interrogated by hostile soldiers who told their commander that the eight missionaries were rebel soldiers dressed as missionaries so they could help the rebels check on government positions. Fortunately, the commander knew something about the Church, and recognized Da as a good example of what the Church stands for. The commander made the soldiers apologize and let him go.

Da was rounded up one other time and taken to the beach. After writing down his name and profession he was put in a line that was moving toward the sea. As each person reached the sea, they were shot. Inexplicably, a jeep drove up, a soldier got out and took him by the hand, and drove him to safety. He was delirious from hunger and confusion for the next week, thinking perhaps he had died and left the earth. In his state of mind, he could not believe that at one moment he had been in line to be shot and then had had woken up the next morning safely in the mission home. In 1992, Da returned to the beach with President Cunningham. As they walked they saw bones strewn everywhere. Hundreds of skulls. He said: “My head, my skull, could have been like that.”

About a week later, he heard rumors of a rescue ship. After waiting several hours for the ship to arrive, he felt “very weak and could not wait any more, [and] decided to find [his] way back home.” Within the hour, three rockets dropped at the port — two on the ship and one on the place where he had been standing in line.

Two months later, another rescue ship arrived at a distance offshore. Some people had been waiting for months without food or medication. Some people swam to the ship in desperation. Others hired people to drag them by rope to the ship. After a 29-hour voyage on which many sick and weak individuals died, the ship arrived in Sierra Leone.

Miles and Stella Cunningham with Da Tarr near their home in St. George, Utah, 1994[iv]

President Cunningham went to the port in Freetown to learn whether Da had made it on what was to be the last rescue boat. After seeing the many dead bodies being removed from the ship, he went to comfort Angélique, telling her that Da was not aboard.

As he arrived back home, President Cunningham saw Da sitting on the porch. He shouted, “Come with me in the car right now! We’re going to see Angélique!” Da recounted:

She saw the mission president, and then she saw me.

Angélique added: “It was like a dream …when I saw him. … I couldn’t believe that it was him. … I cried, and … so many things came to my mind at once. It had been six months. He was so slim, and his pants were so baggy [and full of] so many holes.”

Da and Angélique went on to raise a faithful family of four children in Kinshasa, DR Congo, to whom they were sealed in the Johannesburg, South Africa temple. They have blessed many lives through their dedicated service to God and their neighbors. No longer a hunted enemy of the Liberian soldiers, Da recently served his country as an advisor for an important national economic development mission. As a capstone to that mission, he was hosted in August 2018 by the president and first lady of Liberia at an Independence Day reception in Monrovia.

Photo of Angélique and Da Tarr taken at their home

Having seen the hand of God repeatedly in the lives of his family, Da is a witness to the power of faith. He testifies:

God is doing things … for Africa. … I always say to people, “The more the situation threatens, the more God draws near.”

Unless otherwise noted, the material in this article has been adapted from “The More the Situation Threatens, the More God Draws Near”: The Story of Da Monyson Tarr and Angélique Kabongo Tarr,” an edited transcript from a recording of the oral history. My sincere appreciation Brother and Sister Tarr and their family for sharing their inspiring stories and for their suggestions, additions, and corrections. Thanks also to Matthew K. Heiss of the global support and training division at the Church History Library for his encouragement and support in the publication of this story, and for affirming permission on behalf of The Church of Jesus Christ of Latter-day Saints to use some of the material found in this article.

[ii] Da gives the date of this photo as 1991. Angélique dates their departure to Monrovia to 1992. The coup d’état that sparked rumors of Liberian complicity took place in April 1992.

[iv] Da Tarr had gone to the US to visit family and for training meetings in Salt Lake City. He was in Utah for ten days and saw many missionaries there. Elder and Sister James Huggard Bodell (1923-) and Maydene Brown Bodell (1925-), the parents of Sister Kriss Gates (who later served three senior missions in Kinshasa) had served a mission in Liberia and gave Da a tour of their ranch in St. George. They suggested he visit the Cunninghams who lived in the area.