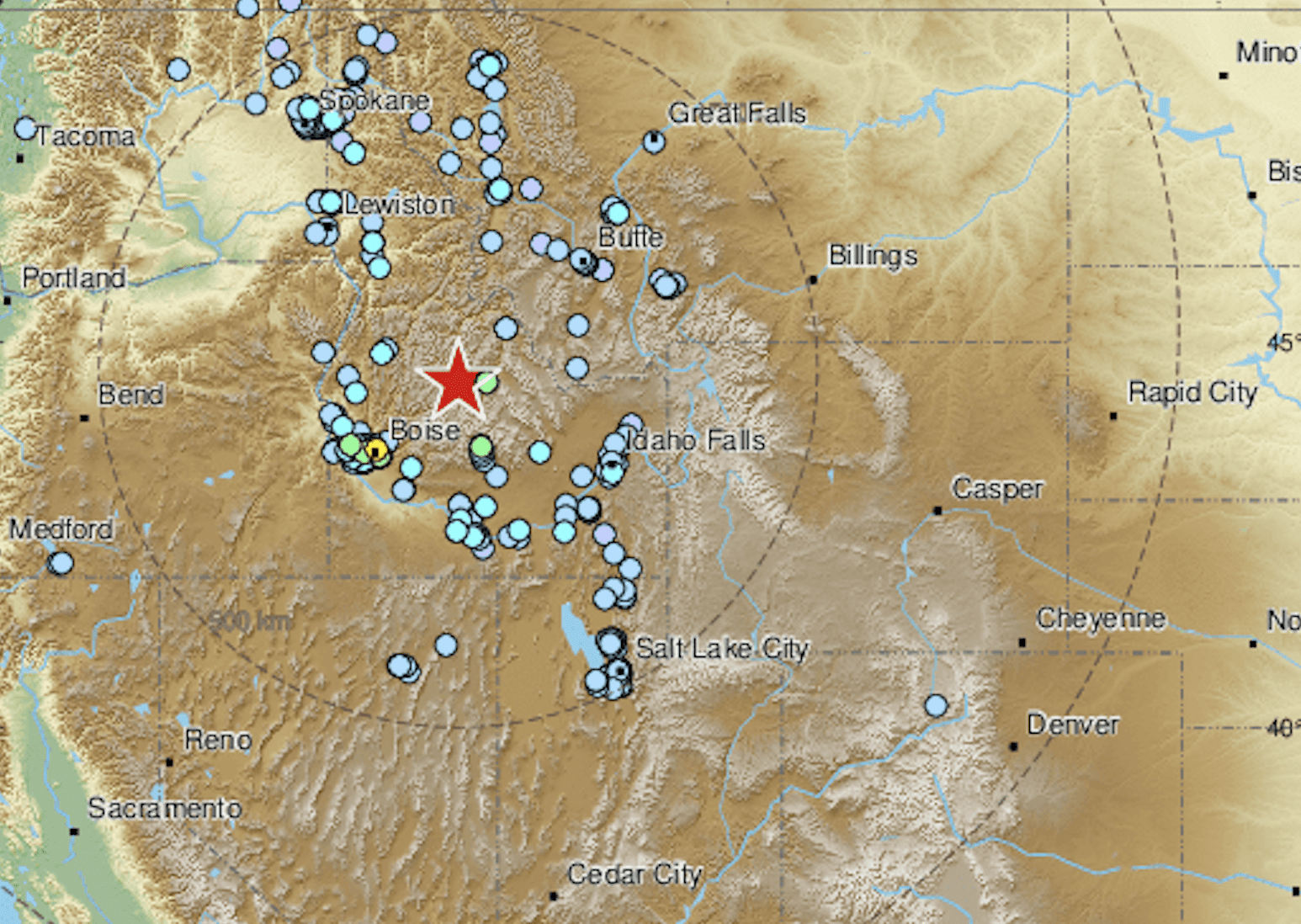 On March 31, 2020, at 6:15 p.m., a 6.5 magnitude earthquake occurred 73 miles northeast of Meridian, Idaho. [1] This large quake would be about eight times stronger than the recent quake near Magna, Utah.

This major sized earthquake in Idaho, with over 36 years between it and the most similar one in the past is a great example to show the possibilities and difficulties of evaluating an earthquake as a sign of the Lord’s Coming or not.

Here is another pair of earthquakes, also high magnitude quakes, this time from Utah:

Current earthquakes, I believe, are the ideal events to trigger this kind of computations and personal study to better understand what is happening in current geologic history.

Trying to compare and contrast earthquakes from one place to another allows us to see similar patterns between earthquakes. Even with this relatively simple analysis, we can see how the data comparisons can quickly diverge—with almost ten years difference between the quakes previous to the two very recent 2020 quakes. We would indeed be surprised to see the previous similar earthquakes Borah Peak and St. George, as very close together, such as the two weeks difference between the two 2020 quakes

If we did have two 13-day comparisons, one set in 2020 and the other set, both in 1983 for example, not one in 1983 and the other in 1992, what might we conclude? You can see how we might wonder if there was someone, someway, somehow, somewhere intelligently triggering the earthquakes because both pairs seemed so perfectly correlated.

We would wonder that because this very unusual scenario described in this section would appear less and less to be random and more and more to appear like the action of an intelligent being or a mistake. And, as earthquakes are something like the natural definition of a tendency to occur randomly, we probably immediately would want to double check our data.

Note: In writing this article, I hit one erroneous key stroke in the date calculations that did exactly the scenario I just described and I had to redo the calculations. The error had put the comparison almost ten years closer than it really was.

This analysis is part of fun scientific studies that I think is part of “studying it out in your mind” (D&C 9:8) as the Lord explained to Oliver Cowdery. We would also, by this study, be better prepared to discuss this and other scientific events in the news with others.

The Lord’s Omniscience—Even for Earthquakes

“God, who knows the beginning from the end, knows, therefore, all that is in between. . . .Below the scripture that declares that God knows ‘all things’ there is no footnote reading ‘except that God is a little weak in geophysics!’  We do not worship a God who simply forecasts a generally greater frequency of earthquakes in the last days before the second coming of His Son; He knows precisely when and where all these will occur. … there are no qualifiers, only flat and absolute assertions of the omniscience of God.” [5]

And now, back to the Book of Mormon and a description of the supernal gifts delegated to a Seer by that same omniscient God:

“An earthquake struck north of Boise Tuesday evening, with people across a large area reporting shaking.

The U.S. Geological Survey reports the magnitude 6.5 temblor struck just before 6 p.m. It was centered 73 miles (118 kilometers) northeast of Meridian, near the rural mountain town of Stanley. There were no immediate reports of damage or injuries. More than 2 million live in the region that could feel the Idaho quake, according to the USGS, with reports of shaking coming in from as far away as Helena, Montana, and Salt Lake City, Utah.”

“Marcus Smith, an emergency room health unit coordinator at St. Luke’s Wood River Medical Center, said the hospital, about 65 miles (104 kilometers) south of the epicenter, shook but the quake didn’t interfere with the treatment of any patients. The hospital in Blaine County is on the front line of Idaho’s coronavirus outbreak, in a region with the nation’s highest per-capita rates of known COVID-19 cases outside of New York City and its surrounding counties.”

““It felt like a wave going through the ground, so I knew right away what it was. It just felt like waves going through the ground,” he said. The earthquake added stress during an already tense time for the region, but Smith said everything seemed fine, for now. “Until the next one, I guess,” Smith said. “I mean, that’s what we do. We’re all good.”

“Based on current scientific knowledge, there is no obvious relationship between the earthquake in Idaho this evening and the Magna earthquake or large events on the Wasatch Fault.”

“We had a 5.7 earthquake, what are the percentages of having a larger earthquake soon?

“Will this delay or trigger “the big one?”

“No, small earthquakes do not relieve enough stress in the earth to reduce the likelihood of a large earthquake. We are still at risk of a magnitude 7-7.5 earthquake (the “Big One”) occurring somewhere along the Wasatch fault. The risk is similar to what it was before the Magna sequence.”

Your article didn’t note that the Meridian Idaho quake was also felt as far north as a Calgary Alberta. It was noted that several in our downtown high rise condos felt the swaying!

It is wise to be cautious about about assigning divine patterns to natural phenomena, simply due to our finite capacities in light of God's omniscience. This cuts the other way too. Some have used mathematical randomness in observed phenomena as evidence of lack of divine intervention. Apparently many of these ur-smart people fail to comprehend that an omnipotent God must be capable of complex efforts that appear random to even the brightest human scientists.