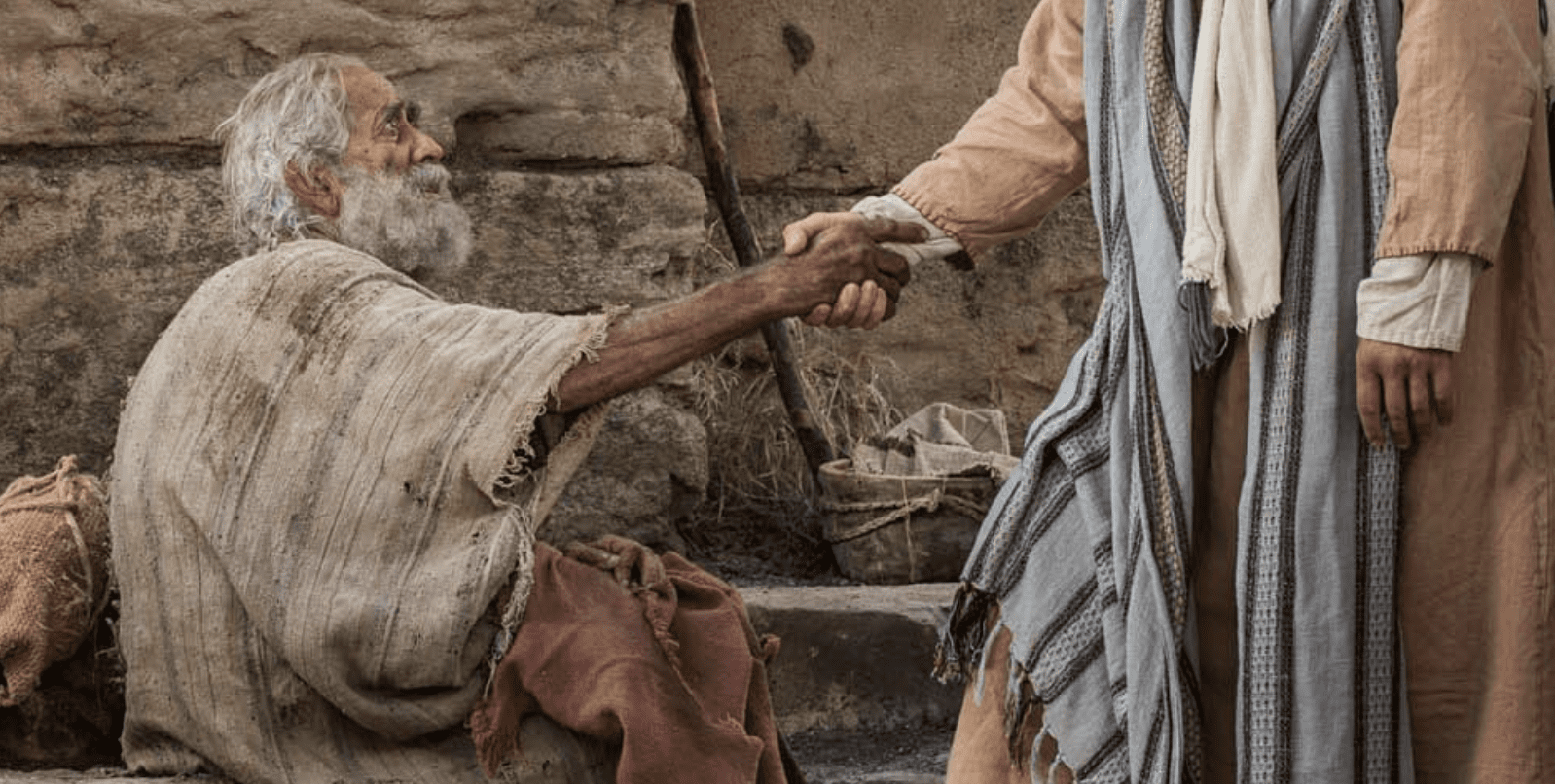 In these chapters of the Savior’s life, He shows the people the signs of His promised coming, “that it might be fulfilled which was spoken by Esaias the prophet, saying, Himself took our infirmities, and bare our sicknesses” (Matt. 8:17; see also Isa. 53:3).

These accounts of miraculous healings testify of His calling. But there is more.  There is a clear pattern in these chapters that helps us profoundly understand His role in our individual lives. Consider these apparently random encounters:

To our modern eyes, Jesus is merely showing concern for people on the margins—the sick, the disabled, the unpopular, the bereaved. He performs miracles for them to demonstrate His love and charity for them.

However, our modern eyes do not see that Jesus saves these people not just from their physical ailments but also from spiritual death. These people—the lame, the blind, the leper, the hemorrhaging woman, the dead girl, the outcasts—were not just unfortunate. They were unclean.

A Jewish man of the time of Christ was not permitted even to approach people like these, much less touch them, enter their homes, or eat with them. These were clear violations of the Law of Moses, or at least as the Law was interpreted in that era.

Tax collectors and prostitutes were unclean, yet Jesus sat down and ate with them. The Pharisees looked on from outside, scrupulously avoiding the risk of becoming “unclean.”

The lame and the blind were unclean and not allowed to “approach to offer the bread” of the sacrifice. “For no one who has a blemish shall draw near, a man blind or lame” (Lev. 21:16-17). By associating with them, Jesus would become unclean.

A woman with an issue of blood was unclean for seven days, but if the hemorrhage didn’t stop, she simply remained unclean—which meant no human contact was allowed with anyone. The woman who touched the Savior had been isolated and in pain for twelve years! Her touch would render Jesus Himself unclean.

A person who touched a corpse became unclean, yet Jesus entered the dead young woman’s room and took her hand.

The Gergesenes (or Gadarenes, in some accounts) were not even Israelites. They were Gentiles, probably Greco-Roman farmers and traders who lived on the east side of the Sea of Galilee (which perhaps explains why they raised swine, animals considered unclean by the Jews). To associate with Gentiles made an Israelite unclean, yet Jesus tried to visit them before they asked Him to leave.

What did it mean to be “unclean”?

In Jewish law, the word tumah referred to the state of being ritually impure. People in tumah were shut out of the ordinances of the temple and not allowed into the synagogues until they performed the rites that would make them clean again. Tumah was considered more a spiritual state than a physical one, a kind of spiritual death. The very word tumah might have originally meant “entombed,” signifying that the unclean person was spiritually as good as dead. (See Marvin G. Wilson, “Jewish Laws of Purity in Jesus’ Day,” TorahClass.com, https://www.torahclass.com/archived-articles/958-featured-article-sp-1418389067; and Martin Jaffee, Early Judaism, Prentice-Hall, 1997, 277.)

As Jesus constantly associated with people in tumah, He was undoubtedly considered to be in tumah Himself. This “uncleanness” explains much of the contempt He suffered from the Pharisees and Sadducees, who were strict observers of the Law. When they saw him eating with unclean people, they asked the disciples why he did so. Jesus overheard them and said, “They that be whole need not a physician, but they that are sick. But go ye and learn what that meaneth, I will have mercy, and not sacrifice: for I am not come to call the righteous, but sinners to repentance” (Matt. 9:11-13).

As the Great Physician, the Atoner, and Giver of the Law, Jesus Himself was untouched by sin and therefore completely clean, thus totally unconcerned at being rendered “unclean” by contact with these outcasts. On the contrary—He sought them out! In fact, in these chapters, He meets with every single category of person who was unclean under Jewish law!

Why did He do this? To show that He can heal you, me, and everyone else of every imaginable form of suffering both temporal and spiritual.

Although we today don’t see physical disability as sinful in any way, to the New Testament people any kind of physical blemish was considered a token of sin. To them, leprosy was not just a bodily but also a spiritual disease. In their revulsion, the ancients shunned lepers as offensive to God as well as themselves. The curse of God was on a leper: “He is unclean, and he shall dwell alone: his dwelling shall be outside the camp” (Lev. 13:46).

When the leper met Jesus in Matthew 8, he said, “Lord, if thou wilt, thou canst make me clean. And Jesus put forth his hand, and touched him, saying, I will; be thou clean. And immediately his leprosy was cleansed” (verse 3). In the simple gesture of touching the leper, the Savior heals the man both body and soul. Listen to the tenderness in the Savior’s voice when He says, “I will.”

Everyone can go to the Savior in sincere prayer and ask for the same healing miracle: “Lord, if thou wilt, thou canst make me clean.” And His answer is immediate and full of love: “I will!” The healing itself might take time, but the Savior always “wills” to heal us and will do so if we ask. No matter how sick, sinful, degraded, or despondent we might feel, He will touch us without hesitating and we can feel His gentle touch.

Note also that Jesus still respected the Law of Moses, instructing the leper to “shew thyself to the priest, and offer the gift that Moses commanded, for a testimony unto them” (Matt. 8:4).  We too must respect the ordinances of the holy priesthood given in our day. Just as ancient Israelites bathed themselves in water as a sign that their “uncleanness” was taken from them, so we must be baptized for the remission of our own sins.

The ordinances are essential, but not enough. They are outward signs of our faith. To be healed by Christ, we must have the faith to seek Him. When the woman with the issue of blood touched His garment, the Savior turned to her and said, “Daughter, be of good comfort: Thy faith hath made thee whole. And the woman was made whole from that hour” (Matt. 9:22) The Savior recognized her as His beloved child, affectionately calling her “Daughter,” and healed her—again with no hesitation.

Of course, without faith, she would not have come to Him to receive the healing blessing. Nor would the centurion (a Roman official who, as a Gentile, would also have been considered “unclean”) when he humbly asked the Savior to heal his servant. The centurion knew that Jesus would become tumah if he entered his house and out of consideration for Him asked Him not to do so. Then Jesus pointed out that the man’s faith was greater than the faith of the “children of the kingdom,” His own people, and healed the servant “that selfsame hour” (Matt. 8:5-13).

By contrast, the Gergesenes refused to allow the Savior into their village, asking him to “depart from their coasts” after he had cast demons into their swine and destroyed them. Apparently, the Gergesenes preferred their swine to their Savior even after witnessing His marvelous power. Like us, they had the choice to turn toward Him or away from Him; but imagine the great miracles He might have done among them if they had invited Him into their lives.

The same thing is true of us. We also have the choice to come to Him, to be touched by Him, and to have our own “uncleanness” washed away in an instant. Often, the Savior’s healing takes more time, but the prayer of a sincere heart is “immediately blessed” (see Mosiah 2:24).

Imagine for a moment the response of a proud Pharisee to the pleas for mercy of a leper or an unclean woman or a father grieving over his dead child. The outward requirements of the Law would have blinded him to the Law of Mercy, which “claimeth the penitent, and mercy cometh because of the atonement” (Alma 42:23).

Fortunately, we have the testimony of the Great Atonement of Jesus Christ, the infinite and eternal sacrifice that can make us clean forever. The mission of our humble Savior is to heal our suffering, to cure and comfort this telestial world and transform it into a pure and celestial paradise.

So beautiful. Thank you for the vivid images you painted in my mind and heart as you made these scriptures come alive for me.

I love this. Thank you so much! This is very helpful in connecting the ancient rituals of the former law to the new inner requirements of the Gospel.