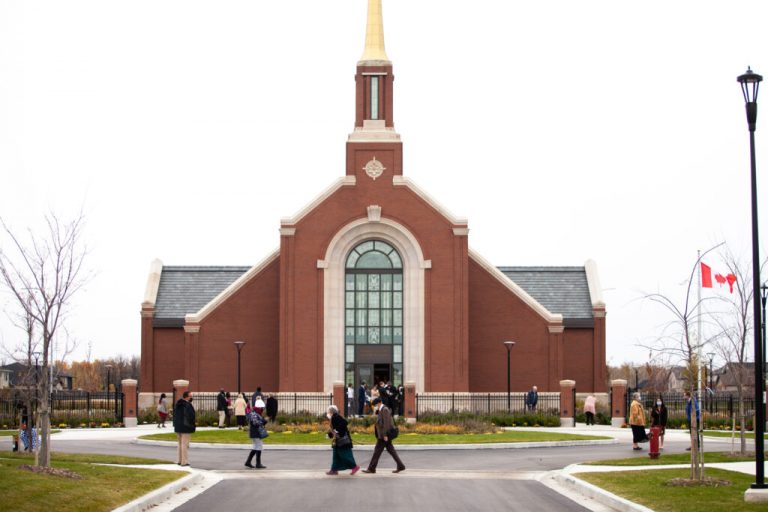 Likenesses of the tenacious prairie crocus are found abundantly in the newly dedicated Winnipeg Manitoba Temple.

The arching entry portal that welcomed visitors to Sunday’s temple dedication rests below a stone prairie crocus. And the flower can also be spotted in the temple’s art glass, rugs, woodwork carvings and door handles.

The prairie crocus motif is, at once, distinctly Manitoban while also serving as a symbol of hope for Latter-day Saints worldwide seeking the promise of renewal following a difficult season of seemingly indeterminate end.

The prairie crocus is the provincial flower of Manitoba. Residents here will tell you it is the first plant to bloom on the Manitoban prairie each year, signaling winter’s end. The plant’s mauve petals are often spotted even before the season’s final snows have melted.

That is a hopeful symbol resonating with people far beyond central Canada. And despite Sunday’s snow flurries and gray skies, the Church’s newest dedicated temple holds the promise of bright new beginnings.

“I have often used the prairie crocus as a reference in gospel lessons because it is a symbol of faith,” said Winnipeg native Susan Taunins. “It comes forth in the snow and in the coldest weather and blooms. And even though it is surrounded by snow, it knows the warmth of the sun will keep it alive.

“That is symbolic of the gospel and so many other aspects of our lives.”

After emerging from a Sunday afternoon dedicatory session, Winnipeg resident Lu-Ann Dopwell was met by snow flurries and frigid winds. But the late-October elements could not chill the moment’s spiritual warmth.

“I feel wonderful,” she said. “It’s great to have a temple in this area. We’ve waited a long time for a temple. Traveling to other temples was difficult for a lot of people, especially some of the seniors. This temple is a positive thing for us all.”