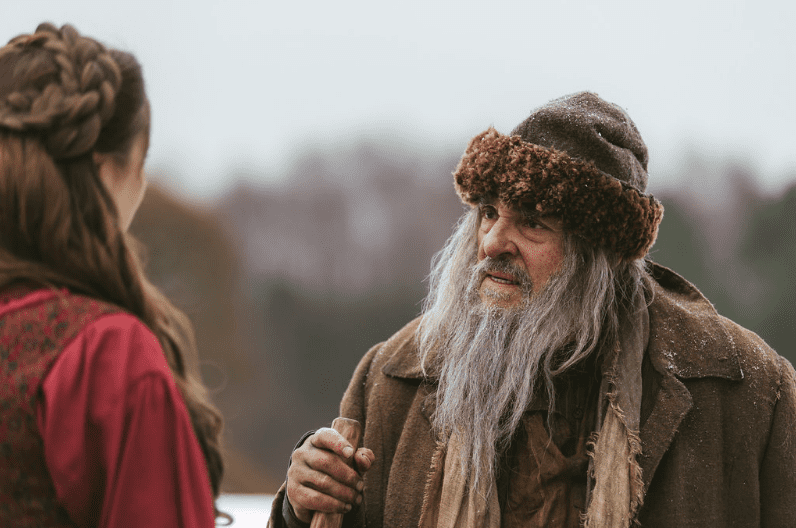 BYUtv’s ‘Winter Thaw’ May Become Your Next Holiday Tradition

Christmas comes earlier and earlier each year and Thanksgiving is becoming the famously forgotten holiday, but this year BYUtv has produced the perfect film for acknowledging the generosity and gratitude of Thanksgiving while acting as a beautiful transition into the Christmas season and its opportunity for a daily acknowledgment of Jesus Christ.

Winter Thaw, premiering on BYUtv on Thanksgiving at 6pm MT, is based on a short story by Leo Tolstoy and stars John Rhys Davies (whom you may know from the Lord of Rings or Indiana Jones).

It tells the moving story of a poor shoemaker (Rhys Davies) in late 19th century Russia, who may know the people of his village by their boots [1], but knows little of their hearts. Poverty and loss have brought him to a place of bitterness toward life and estrangement from his only son.

On Christmas day, he has a vision of his long deceased wife, who tells him that the Lord will visit him today. He fearfully prepares for what he believes may be the end of his life while reflecting on the choices that granted him his current solitude.

Rhys Davies says that when his manager asked him if he’d heard of a short story by Tolstoy about a man called Martin the Cobbler, his response was “You had me at Tolstoy.”

Rhys Davies told me that although he is certain that actually living with Tolstoy would be a miserable experience, “the Russian sensibility” attracts him. He said that even though Tolstoy had a serious ego, he was constantly searching for the answer to “how do we live properly?” or more pointedly “How can a rich man enter the kingdom of heaven?”

In the case of Martin the Cobbler, I suppose it is really, “how can a poor man enter the kingdom of heaven?”

The lead actor’s deep connection to the material shows through in the compelling depth of his performance. Though the film is only an hour long, it is enough time to believe that this actor is not merely portraying a caricature of a peasant, but that the character has really lived the lifetime of sorrows that made him the man he is for this brief Christmas day through which we get to accompany him.

The dead of a Russian winter as portrayed in this film is stunning in its authenticity. The setting could not be mistaken for a back lot in Utah Valley for it bears too many of the earmarks of rural eastern Europe in a time that seems long ago to us, but whose implements and tools were still being used until much more recently.

It was shot on location in Lithuania, and all but two of the performers were locally cast. Their eastern faces and eastern accents transport you in a way that doesn’t feel like pretend. All of the performances were worthy and wonderful.

Of particular note was the performance of Valentin Novopolskij, who plays a man passing through the village who comes to Martin to have his boot repaired before continuing on his journey.

John Rhys Davies said of him that he had “a lovely luminous energy” and indeed you can feel that energy emanating from the screen. I haven’t seen a performer with that much inherent warmth and spirit in his presence for a long time.

With such a cooperative and dynamic cast, it was the weather that presented the difficulties for director Adam Thomas Anderegg and producer Russ Kendall. They had found their practical settings, “period homes and buildings and cobblestone streets that had centuries and centuries of texture,” but they also chose their locations partially for their snow and genuine winter chill.

Because of a recent rainstorm, however, the location had no snow left upon arrival. The chill was there, but the blanket of white they were expecting was missing. So they did what filmmakers must do, they created their own.

And indeed, the vast snowy landscape of the opening shots accompanied by the beautiful, old world music of Nicholas Hooper (who composed for two of the Harry Potter films), feels as chilly as if it were all real snow.

There’s another secret to how Winter Thaw created an environment which had what John Rhys Davies called “a positive dynamic that makes things easier,” a dynamic that ultimately turned out a film that may be worth watching on an annual basis.

When I asked Adam Thomas Anderegg and Russ Kendall what they wished I would have asked them or what they wanted more people to know, they each took an opportunity to praise the talents and abilities of the other.

Adam said that Russ is a producer that takes his productions around the world, pulling together the best talent and ultimately creating something that is expansive in its scope and in the feeling the audience takes away with them.

Russ was quick to jump in and praise Adam’s ability to go into a project with a vision, and yet still highly value those around him. He added that, “Adam empowers people to do their best work.” That is a quality that serves this film very well.

To have a production team that is quick to praise the gifts of one another and slow to complain about the inherent difficulties of the collaborative art of filmmaking, is a recipe for a harmonious creative environment and ultimately for a Thanksgiving special you will truly enjoy.

Winter Thaw will premiere Thanksgiving day at 6pm MT on BYUtv and will play again at the following times.

It will continue to play at various time throughout December on BYUtv, click here to check their other listings.

I've looked forward to watching this movie every year since it came out. I've been hoping it would be available on DVD - ???

We watched it last night. We thought it was wonderful---all of it. We are grateful for this inspiring film.