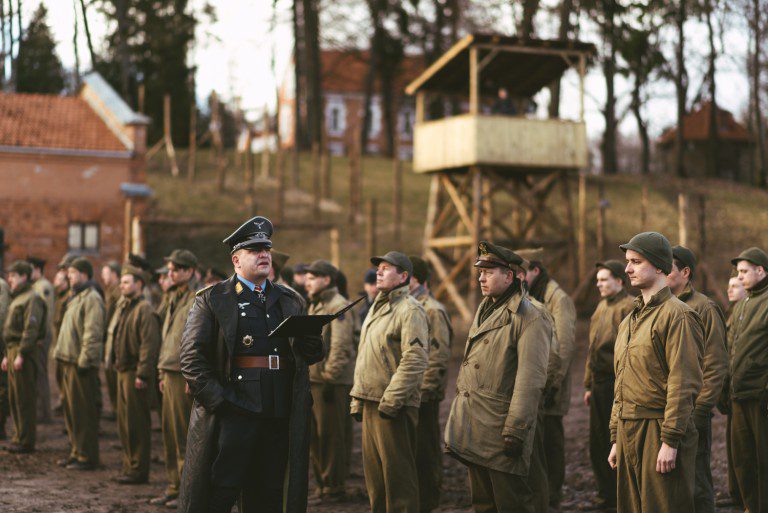 Instrument of War, a new film from BYUtv set to premiere on Thanksgiving day, is inspired by the true story of WWII bomber pilot Clair Cline who was shot down and taken as a prisoner of war in a German prison camp. The story follows him and the other surviving members of his mission as they struggle to remain psychologically sound while in the captivity of a hardhearted commandant.

And how does Cline choose to cope with this helpless and hopeless situation? By building a violin from only what he can find in their dingy, meager captivity.

It is, in many ways, an insane undertaking to risk severe punishment to secret chair legs and bunk boards and string to attempt something that you’ve never successfully done before, even under the best circumstances. But maybe it is exactly the creativity and collaboration and determination of such an undertaking that will keep these men alive and continue to give them hope when everything seems lost.

Perhaps no historical moment gets more attention in the movies than World War II. Seventy years on and new movies and television continue to be made and continue to be compelling in their examination of that brief, earth-shaking season of our history. Why do we do it? Why do we keep coming back to it? One reason might be that it was a conflict where the distinction between good and evil seemed clearer. We knew what we were fighting for, or at least what we were fighting against.

Yes, one of the earmarks of any World War II era film is that the bad guys are very bad and the good guys are very good. But things are not so cut and dried in Instrument of War and the film is better for it.

The most compelling thing about this film is its departure from the traditional us vs. them, obvious good vs. obvious evil approach that is so common in films set during this era. This prison camp story isn’t as simple as a tale about ruthless overseers and their abuse of powerless, but valiant heroes. Instead, all the characters (including the Germans) are complicated and relatable. All of them are victims of a conflict that is much larger than they are and all are left to deal with that conflict in whatever ways they can.

As an American officer in the prison camp with Cline puts it, “This war will end, and how we face it in here will make all the difference when it does.”

“When this script came in front of me and I had the chance to read it, it surged through me,” said the film’s cinematographer Wesley Johnson, “I felt a tremendous responsibility to the story; knowing that it’s a true story, knowing that it’s somebody’s life. You take it very seriously and very soberly.”

Indeed, the script was written and the project was already in the works when the team at Kaleidoscope Pictures approached Clair Cline’s son to ask whether they could make this film about his dad. He was impressed with the company’s other work and ultimately agreed that they could move forward. He even consulted closely with them throughout the process.

The impulse to make this violin, to embrace music in the midst of misery seems to be an attempt to maintain a fundamental part of himself. They could take his power, even take his freedom, but Cline wouldn’t let them have his soul.

In this context, I was moved to learn that Cline’s love of music remains strong in his posterity. His son, Roger plays bass for the Chicago Philharmonic. Roger’s daughter plays viola for the National Symphony in Washington, D.C. and her brother plays the cello for the Arkansas Philharmonic. Across the country today, there are beautiful strains of music played that owe their existence and no doubt some of their passion to the strength of that young man in a prison camp so long ago.

Actor Jack Ashton (Call the Midwife), leads the UK-based cast as Clair Cline with performances that are stellar across the board. The production quality in general sets a high standard for future original productions from BYUtv of which there are apparently going to be many as they enter a new phase of focus on original content.

Instrument of War, like last year’s Thanksgiving special Winter Thaw, was filmed in Lithuania. Most of the principal photography took place in February and March, which meant battling the still-wintry weather, which was an ongoing struggle. Of one particularly grueling shoot day, cinematographer Wesley Johnson said, “we virtually had every season: we had the fullest sun, we had hail, we had rain, it was wildly cold. It was a day long prayer is what it was.”

I imagine being up to their knees in mud and frequently rained on as they trudged about their makeshift prison camp set, gave the filmmakers new insight into how physically trying actually living under such circumstances would’ve been for these POWs. Johnson called the experience of making this film, “miserable euphoria.”

“Even in the toughest moments,” he said, “it is as happy as I’ve ever been, to make this movie.”

Director Adam Anderegg and producer Russ Kendall said they shared Johnson’s mixture of frustration and elation and are ultimately so proud of what come of it all in the end. They should be. As a viewer, you can feel the love and attention and joy that went into bringing every detail of this story to life.  It is, by its very nature, jarring and tragic, while still maintaining a sense of humor and heart that has you laughing between the tears.

This film will not only tell you a story you probably knew nothing about, but will also show you a side of the people, the real people on both sides that were caught in the midst of this war, that we don’t often see in the films that explore it. There is such humanity to the story and such nuance in the storytelling that you are sure to feel truly edified when the credits roll.

To see the schedule of other times it will be broadcast throughout the holiday season, click here.

I loved this movie! My uncle was a POW in a German camp. One of the other prisoners was so badly injured and so poorly treated that my uncle and the other prisoners had to remove his infected eye. My uncle determined then to become a medical doctor if he got to return home. He became a fine doctor. For some reason, he was given supplies with which to knit and he also taught himself to knit beautifully. He also said that the German guards could not be roundly vilified. He said some of them saved the lives of the prisoners. Some of the prisoners even paid their own way to testify on behalf of the guards at their trials after the war.

When I was on my mission in the 1960's in the North Carolina hill country I had the opportunity to be told of the capture and POW history of a prisoner of the Japanese. He was captured in the Philippines and later transported to Japan and put to work in a coal mine. Basically being starved and worked to death. He was LDS. The coal mine was across a range of hills/mountains from a city that became infamous. The prisoners knew the war was ending as the saw evidence of more US bombers and a few shot down pilots joining them. In August, 1945 a B29 flew over their camp and then there was a horrendous flash on the other side of the mountains. They POWs had witnessed the Atomic Bomb dropped on Nagasaki. The aftermath was not a violin, but most of their guards left. I was told they took revenge on some guards and for a few days roamed the nearby countryside and took whatever food they could find.