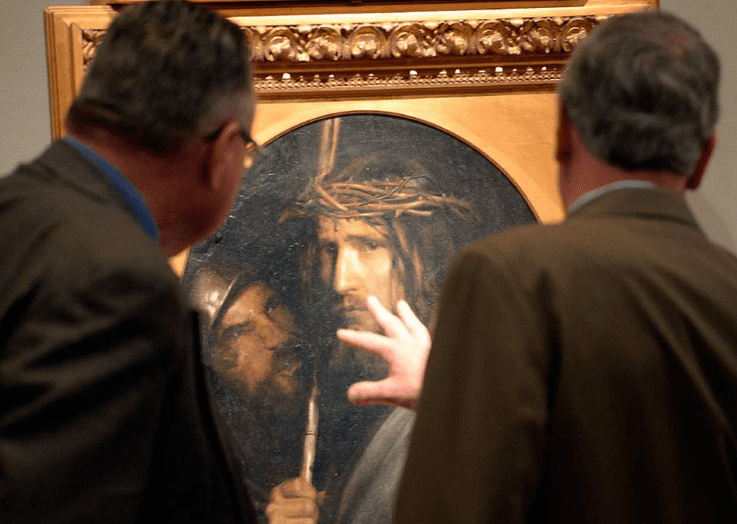 A newly discovered Carl Bloch painting has been acquired by Brigham Young University after being hidden from the world for 135 years, though the picture may look familiar to some.

“The Mocking of Christ” is another version of a similar work by the Danish master housed at a church in Ordrup, Denmark. Though both paintings portray Jesus being mocked by a Roman guard, BYU’s newly obtained treasure has only gray and brown tones, while the other is saturated with bright hues, including Christ’s red robe.

“As we look at it, there’s a mysterious quality, both to its mission — for whom was this created? — and what was the owner’s desire in having a grisaille, or gray-tone version of this painting?” Mark Magleby, BYU Museum of Art’s director, said Thursday at a news conference revealing the painting.

The 1880 painting surfaced from a private collection in December, when an auction house in Denmark showed it to art consultant Peter Titelbech, who recognized it as a Bloch piece.

Titelbech specializes in the Danish artist’s work and has a long relationship with LDS Church-owned BYU. He knew of the museum’s interest in Bloch’s paintings and persuaded the auction house to take it off the market and sell it directly to the Provo museum.

“This is the only place” for the painting, Titelbech told the auction house. “There are certain pieces that have one destination.”

Alan, if you click on the Read Full Article link you can see the whole thing.

Alan, you can - just click on the link provided at the bottom and go to their photo gallery to see the painting.