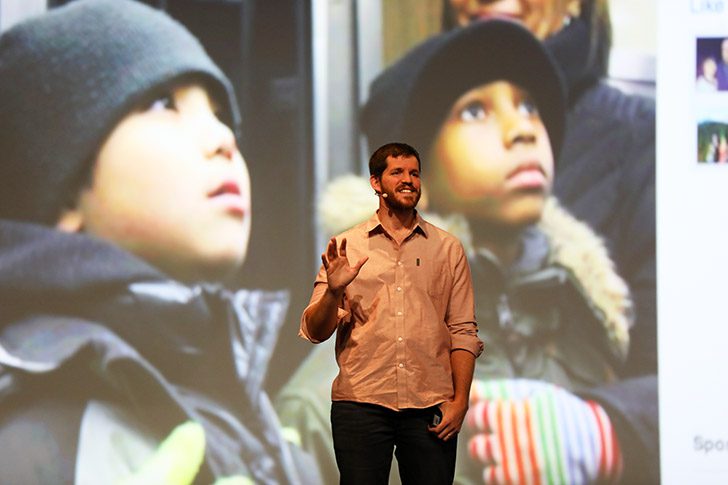 Brandon Stanton spoke at the recent RootsTech conference sponsored by FamilySearch. RootsTech is the largest family history and genealogy conference in the world.

When Brandon Stanton created the Humans of New York blog, based on his stopping random people on the streets of New York, taking their photo and then sitting down to hear their story which he published to the world, he could not have dreamed it would be so wildly successful. Yet, seven years later he has 25 million people who follow his social media pages and two New York Times best-selling books.

This is more followers than most of the large national media outlets, and it suggests the hunger that people feel to look into the hearts of each other.

Stanton said it also shows that everybody has a story and a yearning for someone else to listen. There is really no such thing as a boring person.

He has interviewed thousands of people on the streets of New York and now has moved on to interview people in various countries around the world like Pakistan, Indonesia and Iran.

At first, however, he focused on the streets of New York where he stopped ordinary people, choosing them randomly. He took their photo and then sat down for about an hour to hear their story. What surprised him was how people were so willing to talk about their lives. Quickly in these makeshift interviews, Stanton was finding out more about these people who were strangers to him than their friends knew who saw them regularly.

Here’s a sample of his work:

“She originally said she didn’t want kids. And I originally told her I was completely fine with that. But that was a lie. I guess I just thought we’d grow into the idea. She also told me that she never wanted to get married—and she changed her mind about that. So I thought she’d change her mind about a child too. Honestly, I would be disappointed if we didn’t have one. I think something magic happens when you open your heart to another living thing. But I don’t want her to make a decision for my sake. So maybe the solution is just to be disappointed.” “Maybe I’m just selfish. But I value our time together. And I want to continue spending time on ourselves. Plus I just don’t feel very maternal. I’m afraid that I’ll convince myself for his sake, and I’ll will myself to believe that I want a child, but then I won’t feel that connection. But he will. And then it will be the two of them– and me.”

“I fostered thirteen little babies in my life. It’s just a passion I have in my heart. Often they’d just come wrapped in a blanket. I could only foster one at a time because I had five children of my own. But one time a mother dropped three children off on my doorstep. She had just given them chocolate ice cream. I’ll never forget how the ice cream was dripping off their faces. Most of the time I’d only have the children for a few months. And once they were adopted, I’d never contact them again. But I often wonder what happened to them. Maybe we’ll meet again in heaven.”

People ask him all the time, “How do you get absolute strangers to confess such things to you in such a short amount of time?” He said, “The easy answer is I just ask. The more complicated answer is that for everybody that I talk to, there are two threads that are going through their minds every single time.

“One of these threads is that this conversation is very uncomfortable, because I ask everything. I tell everybody at the beginning the questions are going to be hard. Anything you don’t want to answer, that’s fine. But once they’ve agreed, the questions I ask are very personal and very probing, and people almost never take the option not to answer. They always answer.

“We don’t ask each other, ‘What is your biggest struggle right now? What have I done to hurt you? Is everything OK?

“One thing I’ve noticed when I stop and ask these people about their lives, I’m the only person who asked. Overcoming the vulnerability of talking to a stranger is this appreciation of being heard. ..

“There are some people, the only thing they have to offer is their story.” He said, “The feeling of being validated and of being heard unlocks something in people that allows them to share.”

Though Brandon has photographed about 10,000 people, including President Barack Obama, he considers himself less a photographer than a storyteller. “I’ve gotten very good at gathering the stories of ordinary people,” he said.

That’s not how things started for him. At 19 he flunked out of college and went and lived in his grandparents’ basement. School made no sense to him because he didn’t know what he wanted to do. “I had no sense of direction in life,” he admitted. “I was in these classes and doing this homework and none of it seemed to connect.”

He was working at Applebee’s and feeling really horrible about himself. He really felt like a failure in life, which was only made worse by looking at social media and seeing how well everyone else seemed to be doing for themselves. “Finally,” he said, “I hit rock bottom. I feel like I’m supposed to do this very meaningful thing in life, but I have no idea what that’s going to be.”

Finally, he went back to the University of Georgia, got straight A’s, and ended up falling into this great job in finance. “It made me feel so proud. It was lucrative. I had a job that made me important.”

Brandon worked at this job for two years but in 2008, he started to lose a lot of money and he said, “I started to get terrified with the thought about losing this job and losing this security. But more, I was afraid of losing that sense of importance. I became so obsessed that all I thought about was markets all the day long. I could have been in the front row of a concert with my favorite band, and I was thinking, ‘What are the markets going to do Monday morning?’”

Finally, the day came when he lost his job, and he said, “It was a very good day.” He took a walk in the park and asked, ‘What do I want to do?” For the last two years all he had been consumed with was holding on to this feeling of importance. He had told himself that he wanted to do something that mattered to him, but that would have to come later, after he got some security and breathing room. He had to make money now.

What he came to realize in that park that day is that he couldn’t buy back one minute of the time he had spent at his job. “How much money could I have possibly made during those two years that could buy that time back? We use our time to accumulate resources. We don’t see time as a resource itself. We fill our time with that sense of importance. We fill our time with activities that we think will make us important in the eyes of other people. Yet, all the resources of the world cannot buy a minute of that time back,” he said.

There is a sort of relentless passage of time and a futility to ambition.

At his finance job, Brandon had been so obsessed with his work, staring at a screen all day long, that he needed to create a space in his mind that he could call his own. That was where having a camera played in. “You tend to form your identity based on what you pay attention to,” he said.

One day in the subway in Chicago, he saw a scene of two kids and their mothers looking up at a sign. They were of different races, but both shared the same look on their faces. Brandon had his camera, but admitted, “I was so scared, I didn’t know what to do. I didn’t know if it was legal to take a picture of people in public.” He grabbed the photo and when he published it got very little attention. Still the germ of an idea was born.

It was also the beginning for him of getting over the fear of interacting with a stranger. “Maybe,” he thought, I could be the best in the world at stopping random people on the street and taking their pictures.”

So, out of work and nearly penniless, he grabbed his camera and moved to New York for a crazy project from a laid-off photographer. He started with one idea about photographing people in the various sections of New York as a kind of visual census, but as he worked the idea changed and grew and became what it is today.

He said, “I always tell people, notice that the idea that I risked everything for and committed myself to 100% looks nothing like the idea that later became successful. If you want to do something big, if you want to make a big change in your life, you cannot wait for the perfect idea because that will never come. You have to commit yourself to doing the work you love full-time, make hundreds of small evolutions along the way and trust that you will become who you need to be and the idea will become what it needs to be along the way.”

A random meeting with this woman wearing green caught fire in Social Media. Brandon took this photo, and then you’ll see his story below.

“So do you do a different color every day?”
“No, I used to go through different stages. But then I found that I was happiest when I was green, so I’ve been green for 15 years.”

Brandon’s interviewing technique evolved as did his locations. He learned something important that you don’t hear from the mainstream media. Journalists are always looking for stories that will sell. In places like Pakistan and Iran the story is often about terrorism and radicalism, stories with very negative traits. Yet, when you stop random people on the streets, they are all struggling with the same things as the rest of humanity—their mom’s cancer, their son’s addictions. When you gather the stories from people on the street—they look human and much more positive than what we hear on the news.

What Brandon is proudest about is that people he just met in the last few minutes are willing to share something very personal about their lives.

When people ask him what is his favorite part of doing Humans of New York, he has a ready answer, “I get to wake up and get to choose the work that I want to do.”

“Too often people use the idea of following their dreams as an excuse to not work. Following your dreams correctly is nothing but hard work.