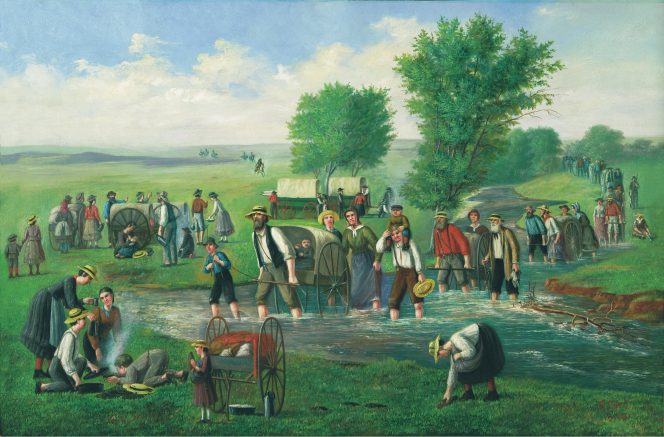 Pioneers make me laugh. A couple of these stories appeared here several years ago, but I dare you to find them. If you did, you’d really be a pioneer. (And probably make me laugh.) I’m backstage again, sort of, beginning rehearsals for a revival of the play “The Trail Of Dreams,” co-produced by the Utah Valley University and the SCERA organization in the very same valley. It’s a piece we (James Arrington, Steven Kapp Perry, and I) wrote to celebrate the Sesquicentennial Anniversary of the arrival of the Mormon pioneers in another valley north of here. We learned about those folks largely from their own journals. They were not the dour specters who glare at us from the photographs of the time. They could laugh. At one another and at themselves. Just not in the presence of photographers.

Mary Bathgate was Scottish, 70, and came from the coal fields in England. She was in the second handcart company (1856) and loved to walk out ahead each morning, waving her stick and shouting “Hurree! Hurree fer th’ handcairts!” One morning she got out of eyeshot and the company heard her screaming rather than cheerleading. She’d been bitten by a rattlesnake and by the time Captain McArthur and a Brother Leonard got to her the venom was merrily digesting her away and her leg was purple from stem to stern. They administered to her and the pain left immediately, but she still had this half-digested leg (rattlesnake venom digests you—you may not have wanted to know that, but there you are). At first she refused to ride in the accompanying wagon, protesting that she’d resolved to walk every step of the way to Zion. But then, as she caved in to the reality of her plight, she called the whole company together and declared “I want ye all t’ witness that I’m bein’ forced t’ ride!”

Along with inspiring me, that story makes me laugh. I think that, along with being brave and faithful and firm in their resolve not to set any fashion trends, the pioneers were funny.

Some of them knew it. Mary Brannigan, a young Irish convert, was with the same company, traveling alone. Captain McArthur called her “a plucky little thing.” She’d heard the missionaries in Ireland and believed them, but had to sneak out at night to hear more, because her father wasn’t sympathetic to the cause of the Restoration, thinking it loony.

When Mary’s company arrived at Fort Laramie, the only place in the New World between Winter Quarters and the Salt Lake Valley where you could re-supply, the captain (perhaps somewhat smitten, who’s to say?) offered to buy the pert young pioneer some new shoes. She thanked him for his intentions and then invited him to observe that her old shoes, after hundreds of miles of walking the trail, were in terrific shape. He looked at her feet, maybe for the first time, and was astounded. He asked her why her shoes were in such a condition when the shoes of all the others were nearly shredded away into the mere memory of shoes. She answered “Perhaps they did not pray as I did that their shoes would not wear out.” Plucky. And kinda funny.

Captain Edmund Ellsworth was a returning missionary who ably led the first handcart company across the plains. Every morning he marched out ahead of the company and set a rapid pace. He did this for three reasons. Firstly, he was a genuinely good leader. Secondly, he wanted to prove Brigham Young’s promise that crossing by handcart would be faster. Thirdly, there were these two comely English maidens who, for their own undisclosed reasons, also habitually marched ahead of the company. They were both named Mary Ann, and the good captain enjoyed cultivating their friendship. Not their friendship with each other, but with him. He cultivated so successfully that when they arrived in the valley he married both Mary Anns. The punch line is that the first thing he did after reaching home was to introduce them to his waiting wife, Mary Ann.

(I, who when addressing one of my three daughters doesn’t get her name right until the third try, can appreciate this particular “slip-of-the-tongue” hazard that must have ruffled many a polygamous marriage—a hazard brilliantly addressed by Captain Ellsworth.)

Sometimes their humor had its roots in irony. Abner Blackburn wrote, “I will tell you a dream which Brother Kesler had. He dreamed that there was a sack of gold and a cat placed before him, and that he had the privilege of taking which he pleased [on the journey], whereupon he took the cat, and walked off with her. Why did he take the cat in preference to the gold? Because he could eat the cat.”

Brother Blackburn had a hard time driving oxen. “I was in the road part of the time and that was when I was crossing it.”

Sometimes it was the weather. Helen Mar Kimball Whitney wrote, “As Sugar Creek we scraped the snow away, and kindled a huge fire. We there formed a cotillion or French four. The boys wore heavy boots and the shoes of the girls were not such as the fairies wear, but we were dancing against the cold.” Okay, maybe not a complete crack-up, but I find her understatement on footwear at least wry.

Sometimes it was digestive. Solomon Chamberlain, who was something of a sourpuss (in fact, he was designated by Brigham Young as The Official Company Grumbler, and anyone else who had a complaint, whine, or bellyache was to get permission to grumble from Brother Chamberlain), wrote, “I was with the rank and file in connection with this diarrhea trouble” (a very common ailment, which in its most virulent form, cholera, could kill a person in six hours) “and held the record for spreading more manure over the plains of North America than any other person of my size, age, and weight.”

Tinsmith: So, you want the handle soldered to your cup do you?

Tinsmith: Then why don’t you have faith that the handle will solder itself, and surely it would be so. Haven’t you the faith to heal your cup? (This story may reappear in a future column to be named “Tinsmiths Make Me Laugh.”)

Sarah: No sir, I haven’t faith that I can mend my cup; but if you will put the handle on good, I have faith that it will stay on.

The tinsmith laughed, soldered the handle and refused to be paid.

Sometimes the laugh is in the way they wrote. William Empey reported, “Brigham Young told us to repent of our sins and follies and such habits wich was a bomation in the sight of God and was a stink in his norstels!”

Sometimes the laughter arises from the contrast in their outlooks. Here’s a mix of the words of Solomon Chamberlain (Company Grumbler) and Lyman Littlefield, whose rosy prose I’ll let you discover for yourself.

Littlefield: Dearly we learned to love the Platte!

Chamberlain: A humbug of a river!

Littlefield: From the first time we discerned the stream, yellowed in the close of a July day and overhung by ancient cottonwood trees, until we bade it adieu within view of Laramie Peak, it seemed as a friend.

Chamberlain: When the wind blew the river changed its course like the parting of the Red Sea.

Littlefield: Day after day we trudged along, and still the cattle, freed from the yoke, hastened to slake their thirst at the stream.

Chamberlain: The water was so silted that grit would settle an inch deep in the bottom of a drink cup!

Sometimes it was wardrobe. My great-great grandfather, John Brown (hmm, yes, I got that one right), had this dream. “I dreamed that I was in company with several of the brethren and all at once I was naked except my shoes and stockings and a vest.”

(Resist the shock that “naked” usually incurs. You can do it. When a rock band I’m in reflected on the shocking effects of the name “Bare Naked Ladies” chosen by some good-natured and markedly un-lewd musicians, we considered for ourselves the variation “Bare Naked iPhones.” Let me know what you think. No, save it for the “What the Heck Do We Call Our Band?” column—coming soon, I promise ((Wait, is “promise” the right word? “Threaten?”)).)

“I was not ashamed, as I did not feel that I was to blame. While contemplating my condition, my stockings commenced growing and running up my legs and covering them and continued until my whole body was enveloped. I asked one of the brethren to help me off with my vest so that it would be out of the way, and we hardly had time to remove it, so rapid was the growth of my stockings. When I awoke in the morning, it was vivid on my mind that following the prophet would strip me pretty bare, but eventually I should prosper and do well.”

Littlefield: Morning is ever a welcome period, as the night’s repose is ended and the slumberer—refreshed in the oblivious hours—first opens the organs of vision upon the green earth made radiant in the early beams of light. (This guy is funny!)

Chamberlain: How disgusting it was to the poor, weary souls who needed rest!

Littlefield: The dews of night hang pendant from the lilies and refresh the green grass… (Getting funnier!)

Chamberlain: Tired and weary as they were, on their hard beds!

Littlefield: …but the resplendence of such gems has but a brief existence… (Ouch!)

Chamberlain: Then that accursed bugle would blow the call for prayers. Which, I ask, did the poor souls need the most, sleep or prayers?

Littlefield: The voluptuousness of that hour glitters through the forests and the silent dells… (I’m dying, here.) …where the untamed roe tosses his broad antlers upward into the brightness of a newborn day, sniffs the freshened breeze, and shakes the tears of night from his shaggy neck, at long last to…

[“Truth In Columnizing” Note: In constructing the play, sometimes we assigned to certain historical people journal reports that we thought were consistent with their characters. Solomon Chamberlain, grumbler though he historically was, was the real first missionary of the Restoration, traveling with just a few pages of The Book of Mormon before it was actually published. But if he’s not the one who said this stuff, he could have been.]

Humor, irony, and high spirits as emotional rescue are necessary in the face of trial, and inevitable in the hearts of good people. Brigham Young, The Great Pioneer Trailmaster and Columnizer… wait, “Colonizer,” said it best.

“There are no fiddlers in Hell.”

How lovely to read pioneer stories that make you--and the rest of us--laugh.

You and I must be related because Sarah Brown Staker was my great grandmother and John Brown my Great great grandfather. fun to see some of this humor