Today’s Quote: “It’s not where you start, it’s where you finish.” (Dorothy Fields)

Who are your heroes? The people that inspire you to think, feel and act beyond your natural self? Your heroes, perhaps like mine, are a collection of individuals both alive and from history. They include the pioneers of the last wagon who trailed their companies by a few hours or a few days, but nevertheless arrived in the valley.

I am constantly inspired by our latter-day prophets, and their personal difficulties that refined them to greatness. Quiet heroes, those of less than celebrity status, also open our hearts, our minds and our lives to being better than we might be otherwise. It’s an easy trick to read their stories and allow them to inspire perseverance with any worthy goal.

One of my quiet heroes is my friend Jen Torres of Ogden , Utah . She’s about halfway to her goal of losing 80 pounds. More importantly, it’s not the first time she’s done it. Rather than feeling like a failure, Jen is quick to say, “If I did it before, I can do it again!”

Jen is the mother of six children, ages 9 and under. They include one set of twins, one set of triplets and a 3-year-old. She is also the president and founder of MyWeightLossTeam.com, an online weight loss support site. (See the link at the bottom of this article for a special offer for Meridian readers.)

Her recent posting of her third race at MyWeightLossTeam.com left my mind and heart filled for days. It was too good not to share with each of you. After all, it’s not where you start … it’s where you finish.

Here, in her own words, is her experience with the Weber State University Race for Dylan (that’s Dylan Smith, a 5-year old with Leukemia) held on September 6., 2008. It was her first bicycle race and her first 10K.

When I went to bed last night, I had decided I wasn’t going to participate in this race after all. I made sure my alarm was set to “OFF” before falling asleep. I suppose that I felt ill-prepared, as I hadn’t gotten much exercise in during the previous week and was not feeling highly motivated or inspired to get up early on a Saturday morning and attempt to complete a 10K bicycle race. Besides, I don’t own what you might call a “racing” bike, and I count myself simply lucky on the days I ride without having the gears jam up on me.

However, for some odd reason, I was wide awake at 6:45 this morning, and figured I might as well do it, because I needed to get some exercise in today anyway.

I was late getting there because I couldn’t find the meeting place on campus. Excuses began flooding my mind as to why I should simply turn my car around and go home. But being the stubborn type of woman I am with that Polish blood running through my veins, I finally got there, and luckily the bikers hadn’t yet begun. I hurried over to the starting line as quickly as my chubby little legs would carry me!

After seeing the other bikers, I will admit I was feeling a bit intimidated! They all had fancy racing bikes, bikes full of official biker gear and outfits to match! I decided to look to them for inspiration rather than intimidation. Like myself, somewhere in each of their pasts they must’ve competed in their first 10K bike race as well, so I determined they weren’t so different from me after all, and I was simply a late bloomer – but a bloomer nonetheless! 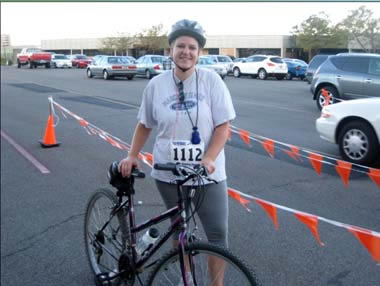 Jen and her low-rent bike, undaunted by the 10K course uphill and down.

At the signal, the “pros” took off! Within about two minutes I realized this would become a ride/walk/stop race for me! The others were long gone and I was left to trudge up the steep hill walking along side my bike. I put in my headphones and selected my racing play list. My weight loss theme song for this year, “Bigger than My Body” by John Mayer, began to fill my ears, and I knew this would be a race to remember. Pretty soon the theme from the Rocky movies took hold of my determination and that “Eye of the Tiger” persistence began pulsating somewhere between my skin and my soul.

The race route was two 5K laps around the university. When I reached my half-mile point, the biker in first place came up from behind me. What could’ve been perceived as an extremely embarrassing situation I instead decided to convert into a moment of personal pride and achievement. Just six short months ago I had been 43 pounds heavier, extremely depressed and sedentary, and couldn’t walk down my hallway without getting winded. If any racer that morning had the right to feel proud it was me! Me: that overweight gal walking along side her bike and so far behind the other bikers they were now beginning to pass me on their second lap!

The first place biker slowed and asked if I was all right. How could I explain that I was walking my bike up that steep hill, I was of course in last place, and that I was fantastic? I just smiled and nodded, and he disappeared into the distance. 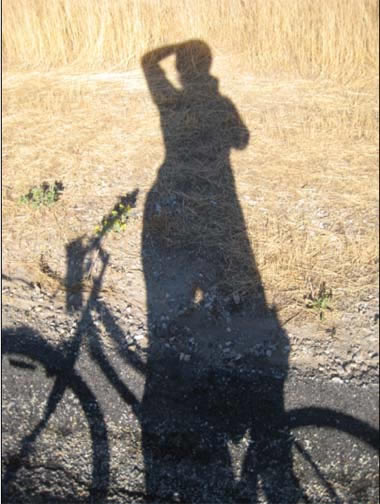 Jen, at one of her many rest stops. (This picture was undoubtedly taken on the uphill segment of the course.)

As I rounded the corner and realized I was on the downhill side of the lap now, I hopped on and began to coast. I started coasting so fast that I began to apply my brakes, which squealed loudly in protest. I guess my discount store bicycle wasn’t really cut out for that type of downhill slope! The inertia I had gained while trudging up the hill on the other side with every tiny little step was now really paying off! The feeling of soaring down that hill, my bike unable to keep up with the slope, was absolutely thrilling! That feeling far surpassed even the most scrumptious chocolately dessert. OK, so maybe not, but it came awfully close and was calorie free!

After the comfort of riding on level ground for a short time, another downhill coast, another snippet of walking, and soaring around the entrance of the university, the time had come again for another slow and steady climb uphill. I was almost halfway finished with the race and began considering that perhaps a 5K bike ride would suffice for today. More excuses and rationalization. I nipped those ideas in the bud rather quickly and determined that if I could complete one lap than I could most certainly complete two! Think of how many more calories I would burn! And of course I needed a picture from the top for My Weight Loss Team, after all.

The idea of getting to coast down the other side of the hill again sealed the deal.

And so I smiled as I passed the volunteers along the route. By the time I was passing the halfway point the other racers were beginning to relax and socialize at the finish line.

I stopped, took a few deep breaths, a drink of water, a picture, and started on my second lap.

After the steady climb again and with still about two miles ahead of me, I saw a truck pass by me that held the route markers with those purple balloons in the back. The race was over and they were cleaning up to go home! I smiled to myself. I didn’t care. I will not clean up and go home until all the racers in my race have crossed the finish line! The key element in this bike race, and my weight loss journey, is that “finishing” factor.

When I was about one-fourth mile from the finish line, I saw her. I took out my headphones to be sure to hear every single well-earned word of encouragement. One solitary lady in a purple shirt. While all the other volunteers and race workers were probably at home by now eating breakfast or watching TV, she had kept her post for me until the end. She cheered me on, told me I was doing wonderfully, and said she was going to follow me up the remainder of the uphill slope to the finish line in her car. And she did.

She was there at the finish line, as were a few other volunteers. I knew prior to crossing that finish line what my next order of business would be. I hopped off my bike, grabbed my camera, and asked a guy standing near to snap a picture of me and that sweet angel lady in the purple shirt who had “kept the light on” for me until I made it home. I asked that special lady in the purple shirt to join me in a picture. She’ll probably never know how much her actions that day meant to me!

A few event coordinators apologized for not realizing that I hadn’t finished yet, and I replied, “No worries! Someone has to be last! Besides, behind every last place finisher in a race is an amazing story.”

A gentleman was taking photos of the event and asked if I would like a photo. It was probably the endorphins talking, but I said absolutely and asked all the volunteers and coordinators to join me in the picture.

I shouted out to the group, “OK! On the count of three we’re going to shout, “MINUS 43 POUNDS!” That was a fun pic!

I feel really grateful that I, for whatever reason, found myself at that race this morning. No matter how alone I physically might’ve been during those 6.2 miles, I truly was never alone

As I got closer to the finish line, I took out my headphones. I wanted to hear the cheers from those strangers because in my mind and heart, I imagined they were the cheers of all eighteen of those fantastic people on My Weight Loss Team.

You can be inspired by Jen regularly at MyWeigthLossTeam.com. Meridian readers can join for free and here’s the link: www.MyWeightLossFriend.com/TEAM

As I thought about her story, I couldn’t help but remember a song my children memorized for a school program. You can actually hear ( https://www.youtube.com/watch?v=Xt9rXhISQvU ) Barbara Cook belt it out while you read the words below

If you start at the top, you’re certain to drop.
You’ve got to watch your timing;
Better begin by climbing up, up, up the ladder.
If you’re going to last, you can’t make it fast, man,
Nobody starts a winner, give me a slow beginner.
Easy does it my friend, conserve your fine endurance,
Easy does it my friend, for that’s your life insurance.

I’ll be back on November 3. Until then, here’s a great recipe:

Our Emily has just returned from a Spanish-speaking mission to
Florida . This is always the meal we fix for her special days: