Willy Wonka, Veruca Salt and the Law of Abundance

Willy Wonka, Veruca Salt and the Law of Abundance
By Carolyn Allen

How long has it been since you treated yourself to reading Charlie and The Chocolate Factory by Roald Dahl, or watched “Willy Wonka”, the movie based on the book? Though the Johnny Depp version of several years ago was good, I prefer the original 1971 version with Gene Wilder.

All of the characters are well-defined and memorable, but Veruca Salt, with that little red dress and the out-of-control look in her eye is a stand-out classic character in the world of children’s literature. In case you don’t remember, she’s the rich girl that wants everything NOW and ends every demand with threats and screams. Her exhausted, worn-down and frazzled daddy hires a factory full of workers to open truck loads of chocolate bars in a winning effort to get his little girl one of the sought-after golden tickets.

Her big solo, “I Want It NOW!’ is a show-stopper as she rushes about knocking things over, singing and screaming at the top of her lungs. (I’ve added the lyrics at the end of this article. Not surprisingly, many foods and fattening treats are included in the things she wants NOW!”)

If you take a step back, most the world’s ills, both historically and currently, seem to come from deep, unmitigated cases of what I call “The Veruca Salt Syndrome.”

In this month’s list of those affilicted with the Veruca Salt Syndrome we have the octuplet mom, Nadya Suleman, who wants more babies than she can take care of, CEOs who want more of the world’s luxuries through bonus pay (regardless of what their company books indicate is possible), homeowners in foreclosure because they want more house than the could honestly afford, and top-level public servants who want more of their private earnings in their bank accounts without paying their taxes.

Historically and currently, we have political tyrants who have killed and created unspeakable wars simply because they want more of whatever it is they want, with no checks or balances. 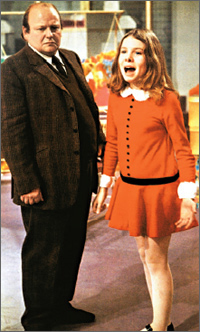 In “Willy Wonka”, Veruca got everything she wanted until stopped by Willy Wonka himself, who calmly dropped her down a chute after she demanded one of the geese that laid golden eggs. When asked where she had gone, Willy calmly replied “Oh, to where all the bad eggs go…”

He sings of a world of “pure imagination.” For those of us who struggle with eating choices and the consequences they bring, it is pure imagination, that we have often taken advantage of, to think that we can eat more than our bodies need without there being an eventual consequence.

Oh, we may lament, for a Willy Wonka to stop us from ourselves before it’s too late. Why? Because food, more and more of it, will always be there. It will always taste good and it will always help us feel better for a few brief moments. There will always be new flavors of chips, candy, snack foods, and recipes for treats. The billion dollar soda industry, no matter the recession, will not be going away, and there will continue to be consumers and customers despite the facts of its physical harm to the human body.

In our Heavenly Father’s plan, there will be no Willy Wonka to stop us from eating whatever (and however much) non-nutritious food we want. As one of my dear friends with a 100 pounds to lose and not in the emotional frame of mind to deal with it says with candor, “like it or not, food is my drug of choice.” There’s a little (or a lot) of Veruca Salt in each of us. We simply want … MORE.

Why? Because we are born and divinely programmed to enjoy abundance! As Willy sings, “Look around and you’ll see” …Whether it’s numberless seeds in tomatoes and watermelons, a countless variety of flowers and animals, spectacular sunrises and sunsets day after day, and the unbounding vastness of the sky and the sea, we are programmed to enjoy abundance! Indeed, the scriptures tell us that “the earth is full, there is enough and to spare…” (D&C 104:17).

Perhaps there is no harm at all in wanting more … of the right things! If you haven’t had a chance to read Mariah Proctor’s great article about the LDS members on “Biggest Loser” (click here). These sterling men, Filipe Fa, Sion Fa, Blaine Cotter and Dane Patterson are publicly living the law of abundance, wanting health more than any food or drink, for the blessings it will bring to their families. Now that’s inspiration, and Veruca Salt transformed with angel wings.

With this great, divinely inherited programming for abundance, the health trick that counts is to simply redefine what we want more of! More vegetables, more fruit, more water, more exercise. More focus on losing a few pounds at a time rather than being overwhelmed by many. The Lord wants us to have more … more health, more energy, more self confidence! And when the choices seem difficult and the temptations as unnumbered as Costco cookies at ward events, it’s time to start quietly humming as we put our hearts and intentions into action:

More Holiness Give Me
Hymn 1231

More holiness give me,
More strivings within,
More patience in suff’ring,
More sorrow for sin,
More faith in my Savior,
More sense of his care,
More joy in his service,
More purpose in prayer.

More gratitude give me,
More trust in the Lord,
More pride in his glory,
More hope in his word,
More tears for his sorrows,
More pain at his grief,
More meekness in trial,
More praise for relief.

I WANT IT NOW:

I want a feast
I want a bean feast
Cream buns and doughnuts and fruitcake with no nuts so good you could go nuts.
No, now!
I want a ball
I want a party
Pink macaroons and a million balloons and performing baboons and
Give it to me now.
I want the world,
I want the whole world.
I want to lock it all up in my pocket
It’s my bar of chocolate
Give it to me now!
I want today
I want tomorrow
I want to wear them like braids in my hair and I don’t want to share them
I want a party with roomfuls of laughter
Ten thousand ton of ice cream
And if I don’t get the things I am after
I’m going to scream!
I want the works,
I want the whole works!
Presents and prizes and sweets and surprises in all shapes and sizes,
And now!
Don’t care how I want it now!
Don’t care how I want it now!