Mormons: "Most Generous, Most Pro-Social Members of Society" | Meridian Magazine

Mormons: “Most Generous, Most Pro-Social Members of Society” 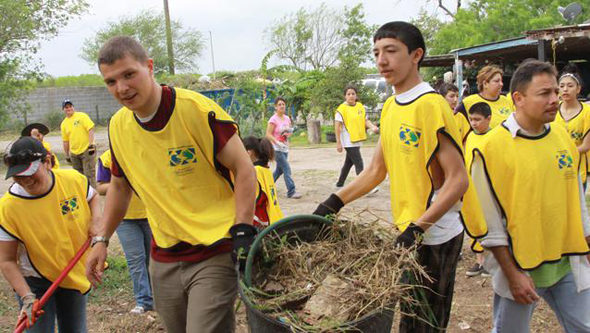 With the world suddenly interested in all things Mormon, what could have been an over-looked study by a sociologist and his colleagues at the University of Pennsylvania has suddenly become a hotter topic, especially with his results.

The research was the topic of a recent roundtable discussion with journalists, scholars and policy experts at the Pew Forum on Religion and Public Life.

Ram Cnaan is a sociologist studying who gives and who volunteers in our society. Two years ago, not knowing anything about the LDS Church, he chose to examine Latter-day Saints and came up with these results: “We found a group of people that are most generous in our society. Through their theology of obedience and sacrifice and strong commitment to tithing and service, members of The Church of Jesus Christ of the Latter-day Saints are the most pro-social members in American society.”

He said that many studies show that about 30% to 50% of Americans volunteer-depending on how you measure it-about three or four hours a month. Utah however, had the highest rate of volunteering than any other state and more hours per volunteer.

Assuming that the LDS Church was the reason, he sought permission from the Church to administer a 14-page detailed questionnaire to Latter-day Saints at church in four regions of the country-California, Michigan, Utah and the Philadelphia area.

So what did the study find? First, the researchers were impressed with the idea of a “calling,” a task that people were asked to do that may go on for several years. Cnaan asked the bishops, “Do people refuse the callings? And usually they say to me – one of them said, I’ve been a bishop for eight years. I had five refusals. Another one 11 months on the job said, refusals? So we asked people if they ever refused in the last five years, and we got 4% – 4.4% – that said in the last five years they had refused, which is less than 1% annually. So this is a culture that when people are asked to fulfill any task, 99% of the time they say yes.”

“If you add all the numbers together, you have about 430 hours [annually for Mormons] – and I’m rounding the number – which amounts to 8.2 hours weekly. If I go to the monthly, which is about 36 hours, compare this to the three to four hours [for the average American]. This is the level of how much members of the Latter-day Saints Church are doing – much more than all other members of American society. If we take the value of the hours volunteering for an average member of the Latter-day Saints, it’s about $9,140 annually. This is a major, major contribution.”

The amount of non-tithing donations were also surprising to the researchers. Cnaan said, “For secular giving, meaning giving money to worthy causes outside of the church, an average person in the church gives $1,171.Nearly three-quarters of Mormons say that giving to welfare through the church – $650. And on top of tithing – $203 per person for religious activities.”

The researchers found that 88.8% of the members they interviewed reported to be paying a full tithing-a number that may be skewed because they were interviewing active members who were at Church. Another 6% reported paying a partial tithing.

Cnaan said, “The total social donation-[with] the religious donation outside-if we only take what they gave for social causes within the Church and outside the Church, we have $1,821.” 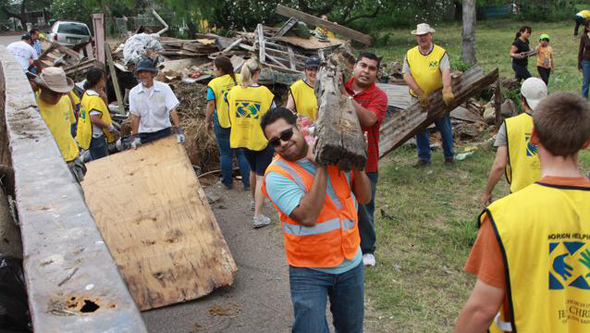 Greg Smith, a senior researcher with Pew who worked on the major study on Mormons recently conducted by the foundation, Mormons in America,  said that Cnaan’s results basically squared with what they had found in their own surveys.

“We can also get a sense of the centrality of reaching out to the poor and needy in Mormonism by taking a look at which Mormons are most likely to see aid to the poor as a crucial part of their religion. It is precisely those Mormons who are the most committed to the practice of their faith – those people who say they attend church regularly, who say they pray every day, who say that religion is very important in their lives. It’s precisely that group of Mormons who are most likely to say that providing assistance to the needy is an essential part of what it means to practice their faith. Similarly, Mormons who have served a mission are significantly more likely to say it’s essential to provide aid and assistance to the needy.”

David Campbell, Notre Dame University, and co-author of American Grace, was the only Latter-day Saint pointed out “that the vast majority of the volunteering that we find among the Mormon population is actually for the maintenance of the Church itself. Now that’s obviously good for the LDS Church. It’s how the LDS Church is able to do all the various things that it does. It’s how it runs the youth programs; it’s how it runs its welfare program; it’s how the administration of the church on the local level is run.

“And undoubtedly it is good for the individuals who are engaged in that volunteer service, even if it’s directed exclusively within the walls of the church. There’s a good reason to think that people who engage in any kind of charitable-type service are developing virtues within themselves that most people would recognize as being salutary for a democratic and a civil society.

“It’s important also to note that that volunteering and service done within the church can benefit the wider community, even if that connection and that benefit is done indirectly. What I mean by that is, as Mormons are volunteering within their own congregations, they are fostering what is often referred to as social capital – social networks within their congregations that foster a sense of trust and norms of reciprocity and such that, others have argued, really enable a democratic society to function.

Campbell noted that with all this time spent “Mormons … are bonding with members of their own faith, but arguably at the expense of not bridging to those of other faiths.”

Campbell said that it was striking that Mormons did not want big government involved in the redistribution of wealth, but felt quite comfortable sending their considerable donations to the central Church in Salt Lake City. “So the [financial] contributions… are all paid into a central fund in Salt Lake City. When I say paid in, I mean the bank deposits are made on Monday morning after the checks are collected on Sunday, and they are automatically transferred to Salt Lake City. Salt Lake City then distributes that around the world so that Mormons in Guatemala can get a share of the money that came out of North America.

“That’s a stunning redistribution, but it’s done through church channels, and Mormons are very comfortable with that and probably wouldn’t think there’s anything strange about it.” In other words, Latter-day Saints trust the source to which they make their donations.

The complete transcript of this discussion, along with comments by others who found similarities between Jews and Mormons, and Evangelicals and Mormons is available here.