In the Public Eye: How to Handle the Mormon Moment | Meridian Magazine

In the Public Eye: How to Handle the Mormon Moment 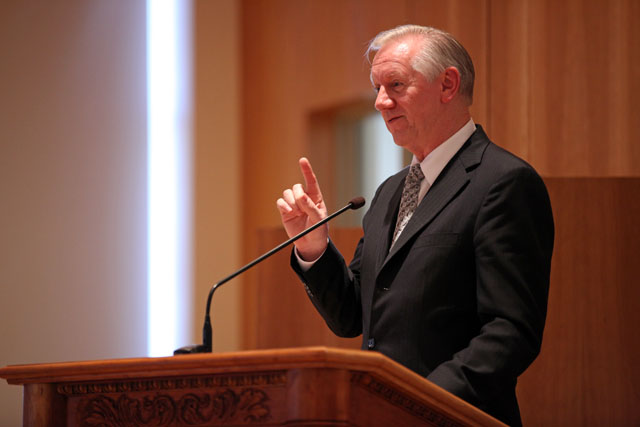 As never before, the LDS Church is in the public eye with stories appearing in multiple media sources, coming from a range of opinions. Like it or not, we are being scrutinized, and Michael Otterson, Director of Public Affairs for the Church, told a meeting of the LDS International Society recently that there are two phases in emerging from obscurity. One is emerging from the kind that comes from darkness and invisibility. The other is coming forth from being misunderstood and the Church Public Affairs department is actively pursuing both phases.

As the spotlight turns upon us, he said, “There will be times when we need a thick skin. We may also need a sense of humor. Our claims are most convincing when our actions are in tune with our own beliefs.”

He said as a young journalist he learned that you had to be able to tell a news story in the first paragraph and that paragraph couldn’t exceed 16 words. How do you work with this journalistic mindset and tell something as rich, complex and nuanced as the story and doctrine of the Church-especially when the name of the Church alone is nine words?

History has not recorded the name of the journalist who created the phrase, “the Mormon moment.”

The originator may have been a headline writer for U.S. News and World Report who, back in November of 2000, used “Mormon Moment” as the label for a story triggered by a new Mormon temple in Houston. The church’s growth, according to the story’s author, reporter Jeff Sheler, was “a tangible sign of the rising fortunes of this uniquely American religious movement …the Salt Lake City-based church is finding a home in the least likely places, from Houston to Helsinki, and from Tampa to Tokyo.”

If we are literal about it, a moment is an indefinite but very short period. An instant. A jiffy. A flash. But The Church of Jesus Christ of Latter-day Saints has a long and poignant history in the United States. It emerged out of backwoods New York in the early 1800s, faced decades of prejudice and persecution that today sound unbelievable to American ears (an official, government-issued extermination order, for instance). Yet in its forced exile to the Rocky Mountains the church somehow survived and flourished, growing through the 1950s and 60s while earning increasing national respect, to become today the fourth largest Christian church in the country.

Otterson said that there are many contributors to the higher Church profile:

–The Emergence of LDS Celebrities. So many high-profile Mormons are in the public eye, the Church is much more difficult to ignore. People like David Archuleta, Jimmer Fredette, Glenn Beck, Stephanie Meyer, Gladys Knight and Ken Jennings in a very natural way let people know that they are LDS.

For instance, Clayton Christensen, Harvard Business School professor and author of ground-breaking business books like Disrupting Class and The Innovator’s Prescription features on his website a link labeled “Why I Belong and What I Believe.” When Forbes wanted to do a story on him, he agreed on if he could talk about his religious faith.

–LDS Politicians: Latter-day Saints serve as senators, state governors and in many public offices, but, of course, none has so deeply penetrated the public consciousness until Mitt Romney announced his intention to run for President, unquestionably driving much of the Mormon moment. Otterson said, “The Church’s profile will remain high beyond the election, but the candidacy has also brought a challenge to the Church in keeping the institutional Church out of the political campaign. It is not part of the Church’s mission to campaign, but to stand independent.

“I can personally say,” he said, “that it does not happen that the Church supports any candidate or platform. It does not happen.” From the very start of the campaigns, the Church pro-actively met with journalists and emphasized that we would stay out of the campaigns. Elder Ballard and Elder Cook visited a string of journalists in Washington D.C. to educate and inform them that the Church would not discuss individual candidates or comment on their individual Church activity. “It is not always easy to stay distanced when others are determined to bring us in,” Otterson said, but these visits went a long way to make the separation clear.

It is also the case that elected officials who are Latter-day Saints must make their own judgments.

–A Growing List of LDS Academics: A new generation of LDS scholars are being frequently quoted in the media like David Campbell, co-author of American Grace and Matthew Bowman, who has just written The Mormon People. Otterson said it is not his place to endorse these books but to note that it is beyond dispute that the work they are engaged in is raising the consciousness of people.

–A Surge of Interest by Non-LDS Scholars: For instance, the Pew Forum on Religion and Public Life has just completed a study of Latter-day Saints that received heavy national attention. In another example, a trio of sociologists has just released a new study that demonstrates how deeply committed Latter-day Saints are to their own faith and to their own community.

—Prominent Journalists Writing about the Church: When The New York Times decides to run an article called “Not Just for Sundays after Church-A New Generation Redefines Mormon Cuisine”, you know Mormonism is becoming a topic of interest. Every day the public affairs office receives multiple requests for information and interviews. Many international newspapers are running major stories on the Church, as well. 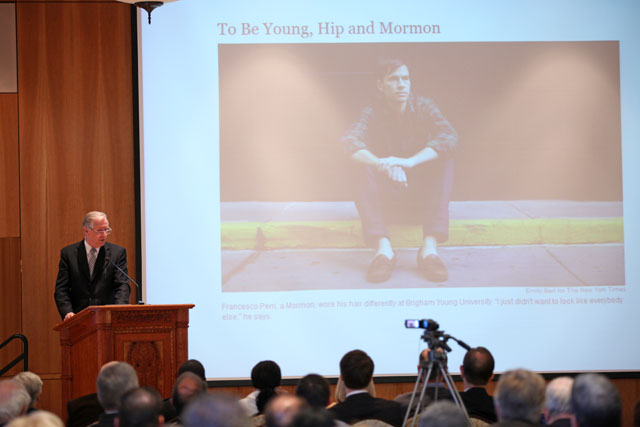 –LDS Bloggers: Just how much influence they have on the Church’s entrance into the public eye is not known. They work under a tabernacle-like dome called the bloggernacle and only occasionally do things spill out. 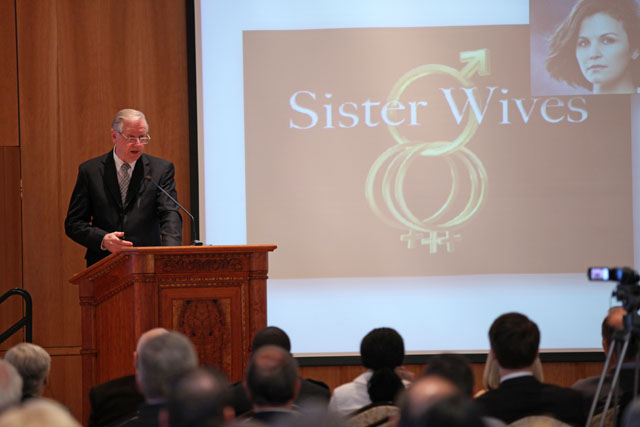 However, a subset of this group, the Mommy bloggers have certainly created a new media niche and have garnered the attention of a writer, Emily Matchar in an article for Salon called “Why I Can’t Stop Reading Mormon Housewife Blogs“. She said, “I’m a young, feminist atheist who can’t bake a cupcake. Why am I addicted to the shiny, happy lives of these women?”

—Outside Bloggers: Some of these are outside of the U.

Getreligion.org cautioned readers of Mormon bloggers to look for attribution, if, for instance, writers make claims of evolving Mormon doctrine.

— Popular Culture: “This,” said Otterson, “is the area we may have the least influence.” As our community gets more attention, its emergence into the popular culture becomes inevitable-and that culture shapes and conditions public opinion. The best example of this is The Book of Mormon on Broadway, an irreverent and at times, blasphemous show that has gathered much attention. Popular culture, like this and others may parody our faith or misconstrue it and, said Otterson, how to respond is challenging. An attitude of defensiveness may further alienate people. However, when there are persistent misconceptions in popular culture or the media, the Church does seek to provide more accurate information.

Otterson said that reality TV shows seem to go out of their way to include Mormons in their casts and added, “We confess ourselves to be completely bewildered by that trend.”

—Church Initiatives: Public affairs and the officers of the Church seek to build bridges and foster mutual understanding with opinion leaders, members of Congress, academics, think tanks and many other groups.

The Growth of the Church

All of the attention coming to the Church, said Otterson, is a subset of one major factor-the growth of the Church. Ever since their arrival in the valleys of the West, the Saints have sent out missionaries and that has been followed by a Mormon diaspora so that there are healthy populations of Mormons in not only the Mountain West, but also California, Washington, Texas, Florida and the Northeast corridor. “Our members everywhere are our best advertisement.”

Our profile in the international media is profoundly influenced by what happens in the media in the U.S. “nowhere has this been clearer than in this Presidential campaign,” said Otterson. To help cope with this international attention, 50 versions of the newsroom website are available and more are going online every week.

The Church also has public affairs office in every part of the world with missionary couples called to assist in tandem with the Area Presidencies in helping to get the word out.

For all its repetition, says Michael Otterson, this is not just a Mormon moment, that will flicker and then fade away, but another significant step forward in coming out of obscurity.