A voluntary subscription to Meridian of $10 is less than two movie tickets and helps to keep Meridian coming to your inbox every day.  Won’t you give a little to help the magazine that brings you so much?  Click here to donate. 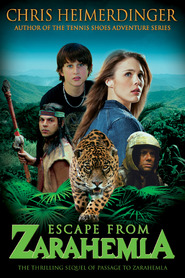 Two Chris Heimerdinger series merge into one with Escape from Zarahemla.  The story picks up six months after Passage to Zarahemla ends.  Kerra and Brock McConnell are united with their father and are living in Southern Utah near their Aunt Corrine and Grandpa Lee, but all is not well.  Kerra mourns the loss of the Nephite warrior, Kiddoni, who disappeared into a mysterious time warp.  Brock is fed up with his father who spends all of his time off wandering around the mountains and who seems lost and remote.

When a flash flood roars out of the deep gorge on the family farm carrying a warrior who only manages to gasp a few words to their father before dying, he rushes up the gorge and Kerra and Brock follow.  To their surprise Grandpa Lee joins them where they detect an alteration in the atmosphere that appears to be a time warp. After a slight hesitation, they one by one pass through the rift to find themselves in an ancient land torn apart by war.  Not only are the Lamanites and Nephites struggling, but they face a vicious common enemy in the Gadianton Robbers who are locked in a power struggle.  One of those vying to control the Gadiantons possesses mysterious powers and has two abnormally large jaguars who do his bidding.

Kerra is surprised to learn that during the twelve years her father was missing, he married a Nephite woman and fathered a small son.  She is anxious to meet her stepmother and her new little brother. Brock begins to understand why his father has been so distracted since he returned to them, but has difficulty overcoming the self-centered and bratty habits of his past.  They learn their stepmother and half brother, along with Kiddoni, and other people their father cares for are prisoners of the Gadiantons who have turned to cannibalism. They undertake a dangerous rescue mission led by a volatile warrior who has lost a great deal and has gained a reputation for violating Nephite codes of law as well as becoming a drunkard.  Kerra is included because she has the uncanny ability to detect the slight changes in atmosphere that mark rifts in time.

Tennis Shoes Among the Nephites began as a young adult novel, but as the series has progressed through nearly twenty years, the characters have grown as has their audience and the series has become a loved institution for adults and teens. The production of Passage to Zarahemla on DVD introduced many new followers to the series.

Heimerdinger does an excellent job of keeping the background of his time travel series within the framework of the Book of Mormon passages from which he draws each novel and relegates real historical figures to minor roles that fit their scriptural role and time period. He keeps the excitement and intensity going through his fictional time travelers.

The characters in Escape from Zarahemla are interesting. They have distinctly different personalities and they develop and learn valuable lessons as well as grow in faith through their experiences.  The plot is fast and spell binding and though the major issues of this volume are resolved, there are enough questions left hanging to keep readers anxiously awaiting the next volume.  I missed the fascinating footnotes found in previous volumes, but enjoyed this book a great deal.

Chris Heimerdinger has authored eighteen books.  He also produced, wrote, directed, and had a small part in Passage to Zarahemla which immediately precedes Escape from Zarahemla.  He is currently working on the twelfth volume in the Tennis Shoes series.  He and his wife, Emily, live in Salt Lake County.  He is the father of eleven children ranging from twenty-two years old down to an infant.