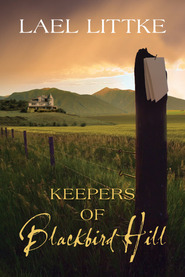 Jane left Blackbird Hill, an eager teenager, ready to conquer Hollywood a long time ago.  After a mildly successful career and a marriage that ended in divorce, she answers her elderly aunt’s summons to come home. She has no idea why her aunt, who isn’t even dead, left the old pioneer mansion and all of its history and secrets to her.  She isn’t sure she wants to become one of The Keepers of Blackbird Hill or if she should follow her cousins’ advice and accept a developer’s offer for the old place.  Lael Littke begins her novel as Jane returns to her childhood home as Jayda, the name bestowed on her by a Hollywood agent.

A series of threatening notes seem designed to rush Jane into a hurried decision,  but returning to the home and values of her childhood, she discovers that instead of resenting the pioneer philosophy of the aunt who raised her after her parents’ deaths when she was five, she should have been valuing those ancestors and learning more about them.  She is assailed by the conflicting views of her cousin who is Blackbird Hill’s single law officer, a small boy whose father expects him to be more brave and independent than a seven-year-old child should be, a teenage girl who knows too much and is in need of someone who cares, her high school drama leading man who cared more than she knew, the handsome, charming development agent, and an aunt who still sizzles and charms every male in sight.

A disgruntled descendant of a neighbor who contested the family’s ownership of the property surfaces and raises Janes’s hackles and begins a frantic search for the deed that will spell out who has a legitimate claim to the property.  The search is primarily focused on a room in the old mansion referred to as the “remembering room,” a place where some long ago ancestor built a cabinet along one long wall, ten drawers high and twenty long.  Over the years the house’s inhabitants have thrust pictures, letters, certificates, anything they thought might be worth keeping as part of the family’s history randomly into those drawers.

A couple of animals play a prominent role in the book as well.  First there’s Tarzan, a large, shaggy, brown mutt, a gift to Jane from her husband five years earlier.  Then there’s Twister, a retired rodeo bronc, who paces his corral and puts on a show whenever a stranger is near.

When Jane’s idea of bringing back the old community pageant once staged at the mansion to preserve the community’s heritage takes wings, her former husband and two old friends show up to stage the most spectacular pageant ever.  These Hollywood figures fascinate the town people and draw attention to the question of whether the property should be saved to preserve the town’s heritage or if the pageant is merely a means of saying good-bye to the old mansion.

As the pageant begins to develop and the town’s awareness is raised, the threatening notes stop, but whoever wishes to frighten Jane away resorts to more dangerous ways of getting across the message that someone wants her gone and the property sold.

Jane/Jayda is an interesting character who was an adventurous child, but became more hesitant and insecure after her parents’ deaths.  Seeing her own name engraved on the back of their tombstone as a child made her think she was dead, too, or should be.  Intellectually she outgrew believing this literally, but retained a reluctance to examine her own beliefs, relationships, dreams, and life too closely. As time went on, she learned to lose herself in character roles on the stage and this added to her loss of identity.  Littke does an excellent job of steering Jane through both self-discovery and to an appreciation of the long line of ancestors who contributed to the person she has become. The two children are charming and realistic, but none of the other adults are fully developed.  We see them only as they interact with Jane in primarily walk on roles.

The plot doesn’t drag, but it isn’t fast-paced either. It does hold the reader’s interest and provides a satisfying background for the growth and development of Jane.  The cover intrigues me because it looks so much like a house I’ve passed several times east of Yellowstone in Wyoming.  It’s lonely solitude speaks of stalwart strength which suits this novel very well.

Lael Littke is the author of more than forty books in both the national and LDS markets.  She has combined her talents with other well known LDS authors several times.  She is an Idaho native who now lives in Pasadena, California.  She is a graduate of Utah State University and furthered her education in writing at City College of New York.