LDS Fiction: A Piece of Time by Victoria Fielding 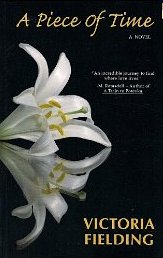 Beginning with the sudden shunning by her friends a few weeks before her eighteenth birthday, Lilly struggles to make sense of her life.  Her best friend Skyler, has no time for her, other than to run down Lilly’s boyfriend, Alex. Her mother is dating a creep, Lilly doesn’t trust.  She’s still confused by her father’s alcoholism, abandonment of their family, and his subsequent death.  She resents their tightened financial condition and wonders why the father she once adored turned into an alcoholic monster who made her and her mother’s lives miserable.  Her other best friend, Jason, was recently killed, and on top of that, she has to deal with Helena, a poisonous classmate.  A Piece of Time by Victoria Fielding gets off to a fast start with plenty of conflict.

Lilly is angry and hurt by life.  Her sense of self worth is low. She acts out by sneaking out of the house when her mother is with her creepy boyfriend and indulges in questionable activities she knows her mother would disapprove of. She doesn’t accept that she’s in over her head  as drugs, alcohol, and playing occult games are introduced to her by her boyfriend until a game goes wrong and she has a terrifying escape.  Still she scoffs at her mother’s religious views and refuses to pray or read her mother’s scriptures.

A snowstorm changes everything.  An early snowfall and a battle with her nemesis, Helena, over a cell phone while Helena is driving results in the deaths of Skyler and Helena, and leaves Lilly in a coma. With Lilly unsure whether she is dead or alive, the reader travels with her to a place where she finds Skyler and Jason, her grandparents, and a host of other family members.  Eventually she even meets her father and his brother, who was killed in a terrible farm accident when Lilly was very young.

Fielding wrote this book as a means of helping young adults “who have no sense of who they are, no understanding of why they are on this earth, and no perspective as to where they are going.” This book doesn’t preach and it isn’t meant as some kind of conversion tool, but introduces those going through rough times with no concept of hope or values to visualize possibilities.  Even those whose lives have not been without values will find much to ponder and consider as they are introduced to the continuity of generations, the concept of forgiveness both of others and self, and the role hope plays in moving forward.

The heaven drawn by Fielding has strong overtones of LDS understanding of the afterlife, but is much simplified and not too different from the concept of heaven held by most Christian faiths.  There are some aspects I felt a little uncomfortable with, but overall it was believable and served the purpose of the story.  Some of the language used in this book may offend some readers; there is no offensive use of the names of deity, but there are a few instances when words not generally acceptable in LDS fiction are used.

The protagonist, Lilly, is well-developed and her maturity grows with the story; she sometimes takes steps backward, but overall she steadily learns who she is and gains the ability to look outward to other’s needs.  She learns how to both forgive and be forgiven. The other characters are not as well developed and several intriguing characters appear with so little background and their stories so incomplete, they left me a little frustrated.

The plot is developed well and builds in a satisfying arc as far as finishing the story nicely.  However, there are a few points, left hanging which hopefully will be resolved in the sequel planned by the author. Because the protagonist in this book celebrates her eighteenth birthday early in the story, one might assume the book is young adult, but it touches on issues important to parents, counselors, and other family members as well as teens, and the writing style is more adult than YA generally is, so I chose to treat it as an adult novel.  It is an absorbing story, and though some readers may not agree with all of Fieldings’s premises, it is a solid picture of the path from the lowest of self-esteem to a sense of worthiness and hope.

Victoria Fielding holds a Bachelors in Fine Arts degree and a secondary teaching certificate.  She is the academic director at a residential treatment center for troubled teens.  She lives in Utah with her family and is the mother of six children. She has two grandchildren, and hopes to have many more grandchildren.

A PIECE OF TIME by Victoria Fielding, published by Light Sojourn Publishing, softcover, 367 pages, $15.95  Available in both print and e-reader format on Amazon.