3:08 AM. A couple of hours ago, I finished reading “Northanger Abbey,” by Jane “here-let-me-endear-you-to-your-female-columnreaders” Austen. I find Sister Austen amiable. And, in passages of extreme passion, diverting. Here’s what happens in the story. In the first chapter, the heroine is a kid. In the second chapter, she’s seventeen and goes to Bath, where there is, as one might safely infer, lots of water. For about twenty pages after arriving in Bath, she walks around, occasionally sitting and watching people. Then she goes for a ride. A few chapters later, she goes for another ride. Then she gets invited to stay in the actual abbey with friends, who live there, where she finds a mysterious chest which contains a laundry list. This disappoints her. But then she gets married.

Really, that’s about all there is. But I couldn’t take my eyes off it.

A few years ago, my son Joe did the sound design for a production of the play “Copenhagen,” by Michael Frayn, and got us free tickets for one of the previews. In this play, two guys talk about math and the wife of one of the guys listens. I had not one clue what they were talking about. I couldn’t take my eyes off it.

Hugh Nibley once said, “If you can’t make something clear to a five-year-old, you probably don’t understand it yourself.” This searing insight did not keep him from confounding the very marrow of my mind. Regularly. I even read all the footnotes, which were a good deal confoundinger than the text they were meant to clarify. I couldn’t take my eyes off it.

I am writing this at 3:08 AM not because Jane Austen was so electrically diverting and amiable that sleep was impossible. I am writing this at 3:08 AM because at 2:30 AM my five-year-old daughter woke up unable to breathe, with a temperature of 104.1. After medicine and moist cloths and menthol rub and herbal aromas and a cool bath, mostly administered by my wife (the almost dead one, remember?) with me just rocking little Adwen except when she was in the tub, her temperature began to come down some. Now I’m on the couch with her feet in my lap and I’m taking her temperature every few minutes and now it’s 99.3. But back at about 102.1, I started writing this, because the creative leverage of the adversity was irresistible (see last month’s column). I have to write fast, before her temperature returns to normal.

(Oops, a little moment of delayed delirium—my batteries are re-charged.)

This column has been named “Celebrating Ignorance.” I think that now would be a good time to define terms, beginning with “ignorant.” If this were a podcast like my friend Steven Kapppp Pperry pproduces for Meridian, the ppronunciation would help us understand what is meant here. There is a way of saying this word that might be phonetically rendered “eeg’nernt.” This means something different than what we’re after. This means “ill behaved” if you are in Utah, Idaho, or some portions of Wyoming, Arizona, and Nevada—elsewhere this means nothing at all. The word with which we are concerned has three syllables and can include among its connotations “untaught” and “innocent.” As far as the “celebrating” part goes, maybe I should have written instead “enjoying.”

All of us are profoundly ignorant of so many things that if we don’t learn to enjoy it, our lives will be truly not amiable.

I enjoyed “Northanger” for two reasons. First was that it made me laugh to imagine somebody hanging norts. Second was that Good Jane so thoroughly and authoritatively understood these people who bathed and walked around and sat and went for rides and got married that I had to respect them enough to discover and care about what happened to them. Or didn’t. Austen’s intelligence utterly beguiled me. (Also, third, the book is really funny.)

I enjoyed “Copenhagen” for two reasons. First was that it made me laugh to imagine some fellow named “Hagen” coping. Not really. Just one reason. The three people in the play so earnestly, even sometimes desperately, meant what they said (the stuff I couldn’t understand). The playwright’s passion for their need to understand one another was totally compelling.

I enjoy Nibley because once I called him on the phone to ask him when a certain philosophical tenet entered the canon of dogma (y’know, putting “can” and “dog” so close together makes me think of Alpo ((I think Adwen’s temperature is getting dangerously close to normal)) ) in the Catholic Church. He simply answered, “Oh, it’s all in Origen” and would go no further. His assumption that I would pull out my trusty copy of “The Complete Works of ?ριγ?νης” and check out what he had to say in the original Greek just made me say to myself, “Is this guy smart, or what?”

For sure, smarter than me. All three of these people. Put together.

Now think about this for a minute: You are kneeling by your bedside and praying that, say, your wife and/or daughter will last out the night. You expect an answer. You are taught that there will be one. But for an answer to come, a question first has to have been heard. Of course, at this very moment several million Christians and Jews are asking the same Person their own urgent questions, and several million Muslims, depending on the time of day, are vying for His attention, and uncounted believers in God by many other names are doing the same. (Talking this phenomenon over with my frequent director and ((gulp)) choreographer, the legendary Jayne Luke, she said that in her church ((I can’t remember whether it was the Congregationalist or the Universalist Church)) their prayers were addressed “To Whom it may concern.”) Anyhow, that’s a lot of people trying to be heard at once. Some churches have dealt with this apparent impossibility by believing in “celestial call centers” where prayers are heard and mediated by a plethora of saints—still, there just can’t be enough saintly cubicles to make it work.

But, against all logic, you happen to know that Heavenly Father is listening in a personal, focused, undistracted manner to you. Not because it makes sense, not because any can of dogma contains that preposterous notion, but because you have experienced it. You know exactly how it feels to have the exclusive ear of Deity. To someone who hasn’t experienced it, it’s foolishness. Ask Paul.

A few years ago, Elder Merrill Bateman, as a Seventy, suggested in General Conference that in Gethsemane each of us had some personal interaction with the Savior. That’s more people competing for the Savior’s time than ever prayed all at once, even when BYU is up against the U. No matter how you slice it, the notion of Deity spending quality time with mortals defies logic.

You can read in the scriptures about time ending, about all things being present before the Lord, about Moses seeing everybody and everything all at once.

(But Moses made a particular point of his being transfigured during the experience. I should know. See below.) 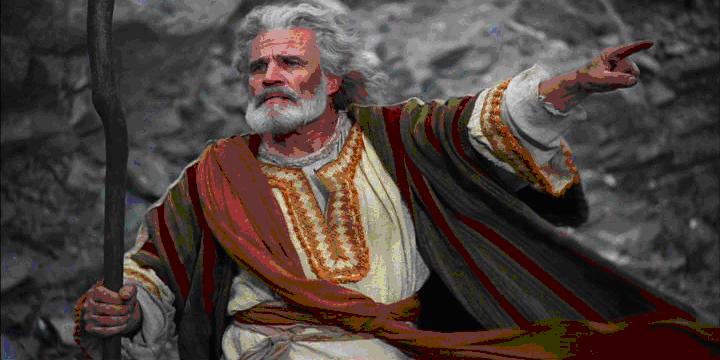 If time didn’t matter, if time didn’t restrict the Lord (as water restricts fish), it would suddenly be perfectly logical for Him to attend to each of us, alone, for as long as it took to love us, understand us, teach us, and save us. The Savior could walk your whole life with you and with no one else. Without denying the same gift to each of us.

Okay, this is not about trying to explain the miraculous. What we’re about is having faith, repenting, getting baptized, and befriending the Holy Ghost. What this column is about is Ignorance.

As early as second grade, I refused to learn things because submitting to learning a thing involved admitting that I didn’t already know it. I was a pathetic figure at Jenny Tucker Baker Elementary. But proud.

The Lord has said, “My thoughts are not your thoughts, neither are your ways my ways. For as the heavens are higher than the earth, so are my ways higher than your ways, and my thoughts than your thoughts.” What are those thoughts that are so different (not merely “better” but “different”)? What are those ways that are different than my ways? Of this, I am ignorant. Seems like a good place to start.

Adwen is sleeping soundly. I think I’ll tell the Lord how grateful I am. But I won’t have to take a number.