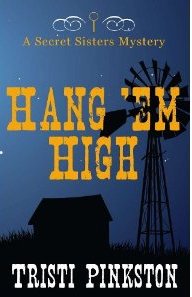 Blizzards, snow, blocked roads, and heavy coats are all part of the blast of cool that arrives with Tristi Pinkston’s Hang ‘Em High, her latest offering in her Secret Sisters Mystery series. I first became acquainted with Pinkston’s work through her serious historical novels, but I truly became a fan when she began her whacky Secret Sisters series.

There are old lady mysteries all over the place, but no others are quite like Ida Mae Babbitt and her sidekicks, Arlette and Tansy. They’re loveable, laughable, and have a knack for solving realistic mysteries and living life to the fullest.  Each mystery easily stands alone, so readers who don’t start with the first one will enjoy whichever one they pick up.

The latest romp features a trip to Montana to visit Ida Mae’s son from whom she has been estranged for twenty years. He owns a large dude ranch and stretches his income with a stable of twenty or so stud stallions.  Almost at once following their arrival, Ida Mae’s son’s top breeding stallion is found dead and a blizzard strikes.  The following day another stallion dies.  There’s hardly a moment for Ida Mae and her son to repair their broken relationship and for her to discover why her son left her, divorced his wife, left the Church, and is contemplating remarriage to a woman who runs a restaurant in the nearby town, but is a frequent visitor to the ranch.  Both are primarily concerned with discovering who poisoned two champion horses and protecting the other animals from a similar fate.

There are plenty of suspects from the young groom responsible for the dead horses’ day to day care, to ten cowboys, a foreman, the household help, and an ornery neighbor. Even family members are not above suspicion.

Ida Mae gets into one scrape after another as she follows well-hidden clues.  The action heats up when Arlette’s niece and her friend Keven show up along with George who just had surgery, but is anxious to be wherever Ida Mae is. Their geriatric almost-a-romance relationship invites a lot of teasing, yet there is something poignant and sweet about it. It’s not the only romantic angle to the story.  Arlette’s granddaughter is writing to Ida Mae’s son who is serving a mission and she has deep feelings for him, but she also enjoys the company of Keven, a man with whom she works and who has become her best friend.

Some of the clues are delivered in a heavy handed manner that reveal the villain way too early in the book, but this doesn’t spoil the fun for the reader since the antics of the old ladies takes center stage in this fast, fun read.  Just following the ladies’ reasoning and their determined battle for justice are enough. The clever dialog is well worth the price of the book. And the icy conditions that form the background for this novel provide a hint of coolness to blistering, end-of-summer heat.

Trist Pinkston has eight published books to her credit.  She is a freelance editor and online writing instructor. She is also a popular speaker. Along with writing and promoting her own books and editing books for others, she is a busy wife and mother who homeschools her children.  Being an avid movie buff, may explain some of the dramatic, highly-charged scenes in her books. Anyone looking for a light, fast novel to end the summer will enjoy Hang ‘Em High and it isn’t necessary to be a western fan to catch all the laughs.