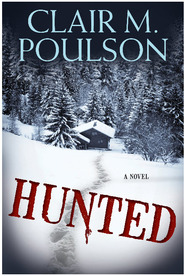 From its snowy cover to the chilling action that occurs in Hunted by Clair M. Poulson, the reader is in for an edge-of-the-seat adventure.  It begins with a young woman, Bria, who recently lost her father in a boating accident.  She agrees to join a hunting party made up mostly of male friends and neighbors; two she has dated and one she would like to date. There are two other young women in the group and one obnoxious young man, Caden, who invited himself to join the party.

Bria discovers she’s not really in the mood to hunt since her previous hunting trips were all with her father, with whom she shared a close relationship.  Caden gets on everyone’s nerves with his insults and attempts to claim deer he didn’t shoot. He slaps Bria and gets into a physical fight with one of the boys.  When Caden is responsible for the loss of a pack horse, Zach, who organized the hunt, insists that everyone hunt for the animal.  Bria is the last to be prepared for the search since she wasn’t already dressed to hunt.  Before she leaves the camp, Caden returns.  His actions are threatening and she flees into the thick brush and timber on foot and without the proper equipment.

When some of the searchers return to camp, they find Caden is dead, shot with Bria’s rifle and she is missing.  Zach takes charge, makes certain the sheriff is notified, and cooperates with the investigation.  The sheriff learns Caden was not who he claimed to be and is wanted on a federal warrant which brings in both FBI and CIA agents.  He also finds sufficient evidence to assume Bria has been kidnapped and may have shot Caden.  Bria isn’t the only suspect; all of the members of the hunting party are under suspicion, as is the unknown person heard playing a harmonica not far from their camp the night before. Soon Zach and the other young people, Bria’s mother and young brother, and even the sheriff become targets of a fanatical environmental group more interested in personal revenge than in saving the environment.

The story is told from multiple points of view and is set in different locations.  It begins in late fall and continues into winter, complicating search efforts in the mountainous area where the hunt and murder take place. An important part of the story takes place in a Las Vegas luxury hotel, providing a stark contrast to the snowy rural town of Duchesne where the sheriff is headquartered.

Poulson is well known for complex mysteries with a strong role played by law enforcement.  A former law enforcement officer himself in a rural area, Poulson has a keen understanding of police procedures, community impact, the part weather plays in an investigation, and the relationship between rural and federal law enforcement.  All of these are brought into play in this novel as he expands what seems on the surface to be a small town crime into one that has national ramifications.

There is a romance element to the story that is not as strong as the mystery and is realistic, but won’t be as satisfying to romance fans as they may wish.  The characters could be a little better developed, especially Zach, but they are likable and readers will identify with them.  The villains aren’t exactly politically correct in today’s climate and show a brand of extremism that is real, even if it isn’t PC to say so.

Poulson has a style that comes close to reporting events instead of showing them, but he has a strong ability to hold his audience.  This book, like most of his others, has a familiar down home feel to it that places ordinary people in an extra ordinary situation.  Many of his characters are LDS, but he taps into the cultural aspect of members lives more than into any doctrinal or spiritual aspect. This quality keeps his books from taking on the slick, sophisticated, not-quite-real persona of most “who done its” and broadens his appeal to his primarily LDS audience.

Poulson has served in the U.S. Army Military Police, the Utah Highway Patrol, and the Duchesne County Sheriff’s Department.  He currently serves as a justice court judge for Duchesne County.  He has served on many justice related councils and boards both at state and federal levels.  He and his wife live in Duchesne, Utah, and are the parents of five children and they have twenty-one grandchildren.