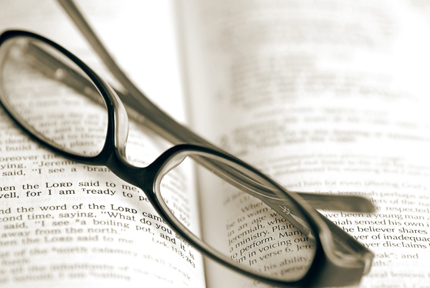 A friend who works in the office at the Washington D,C. Temple has a happy habit of printing out devotional talks that have been given on one of the BYU campuses, and leaving those printouts next to the temple switchboard.  I always like to be assigned to work at the office switchboard so I can read these talks when the phone’s not ringing, and one of them recently was a real doozy.

When I read the title aloud, “My Top Five Least Favorite Scriptures” , everyone in the office was anxious to know which scriptures were so feared that they would be on speaker Richard Draper’s top five list.  So I quickly scanned the talk to find out what scriptures were so frightening that they were on the bottom of his scripture barrel.  .

All I can say is that we were pretty surprised to see the scriptures he chose.  Every one of them concerned things that will happen in the last days — you know, the gloom and doom scriptures that describe the earthquakes and the floods and the moon turning to blood.  When I read his list I said, “Here is a man who is a lot better person than I am.  I can think of a whole lot of scriptures that are much scarier than anything on his list.”

Here is my list of least favorite scriptures, along with an explanation of why they are so much scarier to me than plagues of locusts will ever be:

That’s a long list, but it’s by no means the whole list.  We aren’t supposed to covet anything, and some of those things are real killers.

The things I have trouble coveting are things I already have.  I love my house with a passion so strong that it tells me some day I’m going to give that house up.  I am not looking forward to that day.

I covet my time.  It’s a whole lot easier for me to take a nap or play a computer game than it is to sit down and write a letter of appreciation to the teenager who gave a great talk about missionary work in sacrament meeting this week, or a letter of encouragement to the man who just lost his job.  And I would infinitely rather spend an evening with my husband than participate in our ward’s book group or go to a Relief Society activity, even though those things sound enjoyable when they’re still a few weeks in the future.  I know we’re supposed to be willing to sacrifice our time, but it’s easy to do that in the abstract and a whole lot harder to do it when the opportunity comes up to make the sacrifice and you just aren’t in the mood.

We often hear that “you are what you eat,” but this is much worse.  I’d much rather go around being thought of as a jar of grapefruit sections or a piece of Popeye’s chicken than contemplate what my thoughts could turn me into.

Abraham Lincoln once said that by the time a man reaches age 40, he’s responsible for what his face looks like.  I see that on people’s countenances all the time.  If you’re happy, it shows on your face.  If you lead a dissolute life, you may look decades older than your years.  But it goes even deeper than that.  I’m afraid that a lot of the things we consider bad luck aren’t luck at all, but are instead the manifestations of our thoughts.

When I say, “I can’t look at a piece of chocolate cake without gaining weight,” or, “I catch everything that goes around,” or, “Nothing ever works out financially for me the way it should,” am I reflecting what goes on in my life, or am I creating what will happen in the future?  I suspect it’s the latter.  I suspect that in many ways my life is following a script I have written, and that things would be a whole lot better if I threw that script away.  If I actually started envisioning myself as not-ugly or healthy or successful, would I become those things?

I think there’s a good possibility that, like a magnet, we attract good or evil to us by our thoughts.  What am I attracting to me?  Even those of us who are considered to be “good card-carrying” church members probably have dozens of thoughts each day that are not in keeping with what we want to become.  Is it ever possible to live one day without such thoughts?

#3  “Judge not, that ye be not judged.  For with what judgment ye judge, ye shall be judged: and with what measure ye mete, it shall be measured to you again.” (Matthew 7:1-2)

This is a killer, because I find myself doing it all the time.  I even find myself judging other people for things that I do myself.  For example, I have a friend who constantly compares other people to herself — never favorably.  It drives me crazy.  But at the same time, I find myself comparing her to me and thinking that I would never condemn people the way she does.

I recently read another thought-provoking BYU devotional talk, this one from BYU-Idaho.  In “Lord, Is it I?”, Robert Wahlquist quotes President Boyd K. Packer’s take on an incident that happened during the Last Supper:

Now, in Matthew 26 we find that it is the eve of the crucifixion. In a very short time, Jesus with the 11 faithful apostles will cross over to Gethsemane, where the Savior of mankind will suffer so intensely that he will “tremble because of pain” and “bleed at every pore” (Doctrine and Covenants 19:18).

But that suffering is still a little ways off. They are gathered in an upper room in Jerusalem to eat the Passover meal. As they eat, Jesus announces in verse 21 that “one of you shall betray me.” In the next verse Matthew records that thy “began every one of them to say unto him, ‘Lord, is it I?’”

Elder Boyd K. Packer, in 1965, made the following profound observation. He said:

“It has always been interesting to me that they did not on that occasion, nudge one another and say, ‘I’ll bet that it is old Judas. He has been acting [strange] lately.’ It reflects something of their stature… rather it is recorded that: ‘they were exceeding sorrowful, and began every one of them to say unto him, ‘Lord, is it I?’”

President Packer goes on to say:

“Would you, I plead, overrule the tendency to disregard counsel and assume for just a moment something apostolic in attitude at least, and ask yourself these questions:  Do I need to improve myself?  Should I take the counsel to heart and act upon it?  If there is one weak or failing, unwilling to follow the brethren, Lord, is it I?”1

As you listen today, don’t let yourself say: “Man, I wish my roommate was here listening to this.

” Or, “Oh, I know exactly who Brother Wahlquist is talking about!” Instead, ask yourself: “Lord, is it I?” “Lord, is it I who needs to change?”

I saw myself in that talk.  Just when I thought I was doing pretty well, spiritually, I was forced to look at myself more objectively than I usually do, and — as usual — I came up short.  I have desperately got to stop judging others.  If I don’t, I will be condemning myself in the process.

I don’t have any trouble with my eyes or my hands.  I don’t look at pornography.  In fact, I try not to read anything that would stick in my mind in a negative way.  My hands are fairly benign, too.

My tongue, on the other hand, is not nearly as innocent as my eyes and my hands are.  Whenever I read about eyes offending us, or hands offending us, I automatically worry about what my tongue has been doing lately.  I’ve worried about that so often that when I looked up the scripture, I was surprised that it didn’t mention the tongue along with the eyes and the hands.

This idea that my tongue could be getting me into a lot of trouble was brought home to me many years ago, when the mother of a dear friend of mine lived in our ward.  Helga, the mother, was a little, old Danish lady.  She was a good member of the Church, but she was crusty!  There was no mystery what Helga was thinking at any moment.  If the thought came to her head, she vocalized it.  I enjoyed spending time with her, because nobody ever knew what was going to pop out of her mouth.

One day I was talking to the daughter about Helga, and said that when we got old, we were probably going to be just as blunt as she was.  “What do you mean, ‘when we get old’?” she asked.  “You’re like that already!”

It’s one thing to say what you think, but what if those thoughts aren’t good ones?  I worry about my tongue all the time.  I don’t want it getting me into trouble.  But as much as this scripture scares me, it doesn’t scare me half as much as the number one scripture on my list.  This is the scripture that keeps me up at night:

#1  If a man say, I love God, and hateth his brother, he is a liar: for he that loveth not his brother whom he hath seen, how can he love God whom he hath not seen? And this commandment have we from him, That he who loveth God love his brother also. (1 John 4:20-21)

Long ago, a recent convert to the Church stood up in fast and testimony meeting and said, “I love all of you — even the ones I don’t like.”  I thought this was so funny I may have laughed aloud.  How could you love someone and not like him?

As the years have passed, I’ve learned how wise that new convert was, and how foolish I was being to laugh at her statement.  There are a lot of people in the world who are not likeable, but we are commanded in the strongest possible way to love them anyway.  Learning how to do this may be a lifelong process for me.

I am a person who has strong opinions.  It’s hard for me to see faults in people I love, and even harder to see the goodness in people I don’t like.  I spent many years surrounding myself only with people who met my stringent qualifications.  Everyone else was unworthy of consideration.

Then I latched onto this scripture, and I remembered the concept of loving people you don’t like.  Now, whenever I find myself really disliking someone, I try to put myself in his shoes.  I try to treat him as I would be treated.  I pray for him, and I put his name on the temple prayer roll.  Surprisingly, doing all those things really helps.

Am I perfect at it?  Hardly!  If I didn’t have a long way to go, the scripture wouldn’t scare me anymore.  As it is, I still believe it’s the scariest scripture I’ve ever read.

I wonder, though, if these five scriptures will still be my least-favorite scriptures ten years from now.  Through the process of repentance, I can grow; I can change; I can improve.  What a wonderful blessing it would be if, like the man who gave the talk at the BYU devotional, the scariest things I could find to put on my list of least-favorite scriptures would be verses that predict future plagues of locusts.  If that ever happens, I’ll know I’m headed in the right direction.