Just 56 miles south of Salt Lake City, Utah, in the middle of the rural countryside, is a three-acre replica of ancient Jerusalem. It is a new movie set created by The Church of Jesus Christ of Latter-day Saints for filming dozens of vignettes portraying the life of Jesus Christ as recorded in the New Testament. (See graphic illustration of Jerusalem Motion Picture Set) 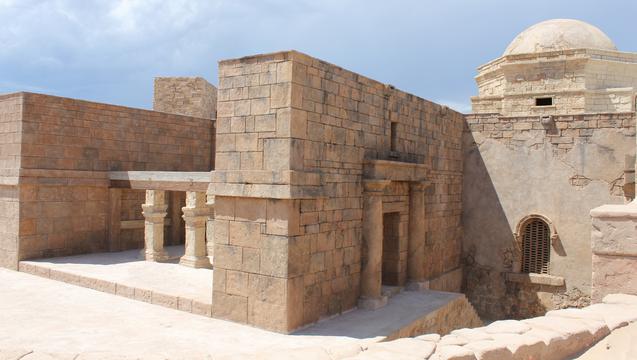 “We follow the teachings of Jesus Christ,” said Elder Lynn G. Robbins, Church general authority and executive director of the Media Services Department. “One of the main purposes for constructing the Jerusalem Motion Picture Set is to help the world better understand the life and ministry of the Savior Jesus Christ.”

It took months of searching to find the ideal location, according to John Uibel, director of creative story development in the Media Services Department. “We searched for a place to re-create the Holy Land on Church property from Logan to St. George, Utah,” he said.

Finally, a piece of land was found in southern Utah County near the small town of Goshen. It is located close to the Church Motion Picture Studio in Provo and possesses all the unique qualities for the project.

“Miraculously, in the spring of last year we came across this piece of property, and honestly, it has everything we need,” said Uibel.

Besides the acreage on which the Jerusalem Motion Picture Set is located, the property includes desert similar to the Judean Plains, sand dunes, a river that ideally resembles the ancient River Jordan where Jesus was baptized by John the Baptist, and an area suited for the Garden of Gethsemane where the Savior atoned for the sins of mankind.

“The challenging part of the design is trying to jigsaw-puzzle this project into the smallest footprint possible,” said Uibel, “thereby saving money, but still providing those views that will more accurately depict the Savior’s earthly ministry.”

Designed to Be Versatile

The Jerusalem Motion Picture Set is smaller in size compared to other production facilities in the industry, but the economy of space and versatile design will allow multiple filming locations in the same area.

For example, an area built to represent the Pool of Bethesda, where Jesus healed a lame man, will also serve as the scene of the wedding feast of Cana, where Jesus performed the miracle of turning water into wine.

The area will be transformed by simply draining the pool and placing a cover over it. The scene where Pontius Pilate, governor of Judea, addresses a crowd just prior to allowing the Savior’s crucifixion will also be shot in the same area of the structure.

An open courtyard at the north end of the back lot will serve as Solomon’s Porch, the complex that surrounded the ancient temple where Jesus drove out the money changers.

In addition, columns are designed to be interchangeable to reflect different eras of architecture. Window treatments can also be removed and replaced for the same purpose.

A crew of about 75 talented local craftsmen and artisans have endured nine months of frigid temperatures, wind, dust storms, torrential rain and extreme heat to painstakingly bring an authentic look to the set.

Meticulous research has gone into the detail of the replicated ancient city. Using photographs of the architecture of Jerusalem, artisans have carved and shaped, by hand, blocks of Styrofoam, turning them into realistic stone walls, arches and columns. Plywood walls are covered with stucco that mimics ancient plaster and its erosion from age.

“They need to be able to not just frame up a building but also to understand what the story is behind the framing of that building and give it the character that it needs to infuse the story with that much meaning and authenticity,” noted Uibel.

The films shot at the Jerusalem Motion Picture Set will benefit the Church Educational System, the Sunday School program, missionary efforts, visitors’ center exhibits and various other projects. Moreover, the projects resulting from the set will help all people better understand and appreciate the life of Jesus Christ.

“Ultimately, the goal is to create a body of work that we can draw from that absolutely speaks to every aspect of Jesus’ life,” said Uibel.

Construction started in November 2010 and is projected to be complete by the fall of 2011. The set is built to last more than 20 years. The facility is not open to the public.