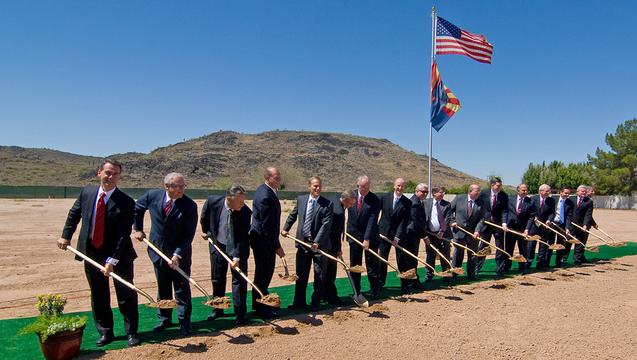 Officials from The Church of Jesus Christ of Latter-day Saints joined with community leaders in Phoenix, Arizona, on Saturday, 4 June 2011 to break ground for a new temple.

Elder Ronald A. Rasband of the Presidency of the Seventy presided at the ceremony. He was joined by the executive director of the Temple Department, Elder William R. Walker; Elder Michael D. Pickerd and Elder Jim L. Wright of the Seventy; and Ann M. Dibb, second counselor in the Young Women general presidency. Several community and civic leaders also attended, including Arizona Secretary of State Ken Bennett, State Majority Leader Steve Court and the vice mayor of Phoenix, Thelda Williams.

Elder Rasband said the new building will be a “beautiful and magnificent temple” that will bless both Mormons and the Phoenix community.

Elder Walker said it was a “joyful day” and praised the faithfulness of local Church members in attending the nearby temple in Mesa.

The Phoenix Arizona Temple was announced by Church President Thomas S. Monson in April 2008. There are currently three operating temples in Arizona, in Mesa, Snowflake and the Gila Valley. A temple is also under construction in Gilbert. There are about 400,000 Latter-day Saints in Arizona.

To members of The Church of Jesus Christ of Latter-day Saints temples are the “house of the Lord,” the most sacred places on earth. Unlike meetinghouses, where Sabbath worship and weekly activities take place, temples are open throughout the week and closed on Sundays.

There are currently 134 operating temples worldwide and 26 announced or under construction.