As the United States marks the 150th anniversary of the Civil War, history buffs and people who had ancestors involved in the conflict can access millions of records recently published on the familysearch.org website. And millions more records are coming, as volunteers enlist in an online campaign over the next five years to provide access to the highly desirable historic documents. 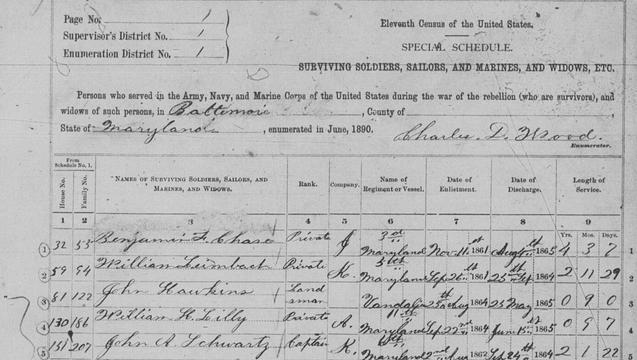 FamilySearch, which is a nonprofit organization sponsored by The Church of Jesus Christ of Latter-day Saints, announced the release of the online records at the annual National Genealogical Society conference in Charleston, South Carolina. The collections include service records for both the Confederate and Union armies, pension records and more. Some of these records have been available for some time but are now being added to familysearch.org/civilwar as part of this project.

Here is a sampling of what is available:

“These records are significant because nearly every family in the United States at that time was impacted either directly or indirectly by the war,” FamilySearch project manager Ken Nelson said. “Each soldier has a story to tell based on what his unique experience was during the war. Each family has their own story to tell. This is the paper trail that tells the stories about that period in our nation’s history.”

Many of the records are specific to the war itself, such as enlistment or pension records. These documents can provide key family data, including age, place of birth or the name of a spouse. Other collections, such as census records, tell the story of ordinary civilians who lived during that turbulent time. Even a local or state death record far away from the battle front may contain death information on a soldier that was submitted by a family member back home.

“With the wealth of records created by the Civil War, I am inspired by the plan laid out by FamilySearch to make a substantial amount of this material available on their website over the next four to five years. This growing collection will be one that will serve the needs of the numerous descendants of the participants on both sides of the conflict,” Rencher said.

About 10 million of FamilySearch’s Civil War records are already indexed, so they can be easily searched by a specific name. However, there are many more records that need to be indexed, and that’s where FamilySearch indexing volunteers come in. These volunteers view a digital image of the record online and enter in important information such as names, dates and places.

“Once these records are indexed and published online, anyone can search for the name of an ancestor and link to a digital image of the original record, if the image is also available online,” Ericson said. “Indexing helps people save time when finding records and enables a more powerful, engaging search experience.”

More than 130,000 people helped with FamilySearch indexing projects in the last year, but Ericson said even more volunteers are needed for this multi-year effort.

“We expect to maintain some focus on indexing records from the U.S. Civil War for the next three or four years to make the collection of Civil War era records extremely robust,” he said.

Also available on the familysearch.org/civilwar website are links to helpful articles from the FamilySearch Research Wiki. These articles include information about each regiment that fought in the conflict and records created by each state that participated in the war. There are also free online classes about how to research Civil War ancestors and tips for family history beginners.