Christianity in Lord of the Rings: Would Easter fly on Middle Earth? | Meridian Magazine

Christianity in Lord of the Rings: Would Easter fly on Middle Earth? 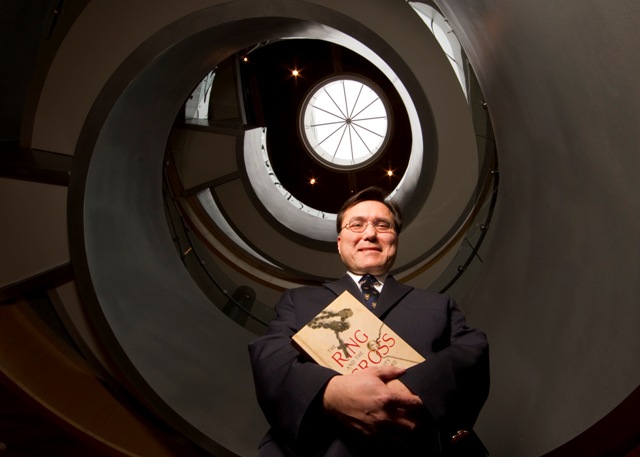 Without a single chapel on Middle Earth, one might assume that religion has no place in The Lord of the Rings.

But with Peter Jackson filming The Hobbit for release next year, BYU historian Paul Kerry’s book will help you decide if The Lord of the Rings series is Christian or just plain fantasy.

“The book upholds certain moral values,” said Paul Kerry, a history professor at BYU.  “You have to piece the clues together on many levels.”

Author J.R.R. Tolkien was a devout Catholic from an early age, even raised by a priest when his mother died. Later he became a professor at the University of Oxford. Even though Catholicism sincerely influenced his lifestyle, Tolkien stated that this series was written for his pleasure and not as an allegory.  Yet, he also maintained that The Lord of the Rings was a fundamentally religious work.

Kerry edited and co-authored a new book called The Ring and the Cross as a debate between scholars arguing whether the trilogy contains a Christian influence or is simply a pagan fantasy.

Some Tolkien fans see what appear to be obvious links to Christianity. The idea that Frodo, a lowly, but hardy hobbit, must carry a powerful and deadly ring to save good from evil appears similar to Christ, who bore the cross to redeem the world.

Yet Kerry warns that viewing Frodo as a direct representation of Christ is too simplistic.

“We have to be careful, because Tolkien explicitly warned against reading his work allegorically,” Kerry said. “You can’t simply say, ‘Oh, this equals that.’ More fruitful is to look for correspondence, themes and patterns.”

One approach for scholars siding on Christianity is to split the “Christ-type” between three characters in the book:  Frodo, Gandalf and Aragorn.  Frodo is the suffering Christ, who bears the burden of others.  Gandalf displays Christ’s ability to teach and hold great power, while Aragorn is the successful and triumphant Christ.

Joseph Pearce, a professor of literature at Ave Maria University in Florida and a Tolkien scholar, also notes parallels between the dates of Middle Earth and the Catholic liturgical calendar. The unreformed Catholic calendar states that Christ was crucified and achieved victory over death on March 25 – the same date that the ring was destroyed on Middle Earth.

Even with those parallels, the literary world leaves room for debate.  The Christian argument can seem messy at the end of the trilogy when Frodo chooses not to destroy the ring.

Through a Christian lens, Frodo’s failure is a moment that illustrates the necessity of grace, the power of mercy and a witness to the workings of Providence.  But from a secular perspective, Frodo is an ordinary man who gives in to his natural hunger for earthly wealth and power.

“Those who wish to seek a Christian meaning in the end of the quest are able to do so; but it was not Tolkien’s primary purpose to expound one,” writes Ronald Hutton, a professor of history at the University of Bristol and a pagan expert, in his chapter of Kerry’s book titled “The Pagan Tolkien.”

Hence the need to present the book as a debate, where different, even strongly contrary, points of view can be discussed civilly, Kerry says.

“I wanted readers to be able to weigh the arguments in the book and draw their own conclusions, based on the strength of the evidence presented and their own experience reading Tolkien’s masterpiece.”