A Death in Iraq | Meridian Magazine

A Death in Iraq 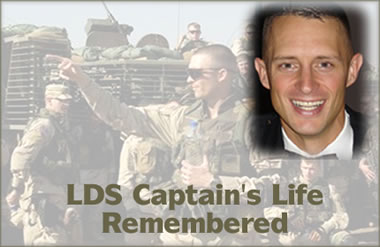 When a suicide bomber walked into a mess hall in Mossul, Iraq, four days before Christmas and blew himself to smithereens, the highest ranking soldier who was killed in the carnage was an LDS father of four.

Captain Bill Jacobsen, who had gone to Iraq because he wanted to give the Iraqi people the same freedoms that he enjoyed as an American, was killed on his ninth wedding anniversary by one of the people whose freedom he was trying to ensure.

Bill’s only goal in Iraq was to get all his soldiers home safely at the end of their tour. His 174 troops had been put in his care, and he never forgot it. Instead, he was one of six who came back to their home base only six weeks after they had been deployed – not for a reunion with their families, but for burial.

For Bill and the troops he commanded in Company A, 1st Battalion, 24th Infantry, serving in Iraq was an eye-opening experience. Bill had never seen a dead body, and he had never been shot at until he was deployed to Iraq . But Bill was a natural leader, and he took it all in stride.

The Army taught Bill how to use lethal force to subdue the enemy, but he preferred to set an example. He wanted to fight only if there was no other alternative. He wanted to show the people of Iraq that American soldiers might be powerful, but they were also good.

As he walked down the streets of Mosul with his soldiers, he was likely to tell a local barber that he wished he had time to stop in for a haircut. He listened to the local people, and he tried to reassure them that Americans were there to help them – not to take away what little they had. His soldiers loved him, and they were eager to follow his example.

Newspaper reporters who were in Iraq to cover the war gravitated to Bill. In the brief time he was there, stories about his adventures appeared in the New York Times and the Chicago Tribune . The Trib described Bill sitting on top of a tank like a king on his throne, sitting in judgment over a parade of Iraqi citizens who were led before him.

As a terrified Iraqi detainee would be brought forward, Bill would either signal dramatically that the man was to be let go, or indicate, equally dramatically, that the prisoner was to be detained. The locals were amazed that the American could tell who harmless citizens were and who the insurgents were, just by looking at them. What they didn’t know was that an Iraqi informant was sitting in the tank and watching the whole scene on video. As citizens were brought forward, the informant was telling Bill over a hidden microphone which citizens he should arrest.