Mark Albright is the president of the Washington DC South mission and shares these missionary stories with Meridian Magazine.  This letter comes from Robert Cordner. 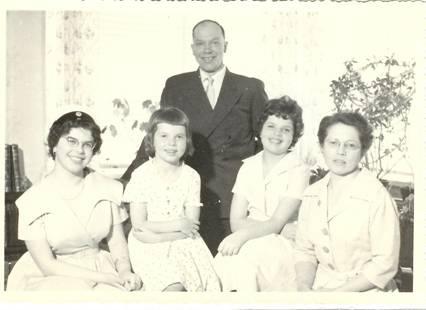 This photo is of the Blomquist family who lived in Pietarsaari (Finnish name) or Jacobstad (Swedish name).  The family is bilingual, but spoke Swedish in their home. Brother Blomquist was serving as the District President when he asked Elder Thore Lofgren and myself to come administer to his wife prior to upcoming surgery for cancer of the uterus.

Elder Lofgren was born in Sweden and lived there until age twelve before immigrating to the USA, so he was bilingual in Swedish and English. Elder Lofgren, speaking Swedish, anointed Sister Blomquist. I, speaking Finnish, sealed the anointing. After leaving the Blomquist home, we had bicycled a couple of blocks away when the feeling came over me that something was not right.

“Elder Lofgren, I am wondering if I did something wrong in the sealing…I don’t know what, if anything I could have done incorrectly…but it is bothering me.” Since he didn’t understand Finnish, he had no way of ascertaining the matter. I suggested we return and do the ordinance again. He agreed.

The Blomquists were surprised when we returned back to their house so soon. After performing the entire ordinance again, I felt perfectly satisfied.  All prior feelings of that something had been done incorrectly disappeared.

The next day when Sister Blomquist went in for her pre-operative examination and procedures the doctors were stunned to discover no sign of cancer.

Over the years I sometimes wondered if, in my memory, perhaps I had embellished the story a little bit. One evening, over thirty years after this special mission miracle, I was asked to be of assistance to a family from out of state.  In the course of our conversation, I discovered that the woman was from Jacobstad and that her maiden name was Blomquist.  I told her that I had served as a missionary there as a young man.  She suddenly became very animated and emotional, exclaiming, “You are Elder Cordner! You are the one who blessed my mother!  My family has spoken of you many times!”

When I related my version of the events, she confirmed them in all the particulars.  She then added “the rest of the story” by telling me that there were some other women about that same time who had also been diagnosed with uterine cancer and that all of them died within a short time after their surgeries. Sister Blomquist was the only survivor and lived cancer free.