Once again the “Saint Squad” is called into action when true love not only doesn’t run smoothly, but runs afoul of a terrorist plot to cripple America’s ability to communicate electronically and financial institutions are targeted for collapse.  Smoke Screen by Traci Hunter Abramson is a pleasing blend of romance and suspense. 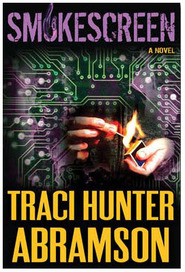 Rising artist, Taylor Palmetta, returns to her hotel room in Paris and is shocked to discover someone has broken into her room, one of her paintings is out of place, and there are blood splatters all over one wall.  The hotel moves her to another room, but she’s left wondering why her room? and what happened in that room?  Though she doesn’t see anyone watching her, she has an uneasy feeling she is being watched as she packs her belongings and returns to America.  Even when she arrives in New York, meets with her agent, buys a car, then continues on to her sister’s apartment in Virginia Beach, the feeling persists.

Quinn arrives at his close friend, Tristan’s apartment for dinner and is surprised to find Taylor there.  He and Taylor had dated previously, then broke off their relationship abruptly with neither knowing quite what went wrong.  Dinner is interrupted by a break-in to Taylor’s car and Quinn goes into protective mode as he senses it was no ordinary break-in.  Tensions rise when Taylor is notified that some of her paintings were destroyed in a warehouse fire where her agent had stored some of her paintings.

Quinn and Taylor grow closer as Quinn and Tristan attempt to unravel a motive behind the strange events surrounding Taylor and her paintings.  They both carry previous baggage that needs to be resolved before they can move their relationship forward.

There is something sinister related to Taylor’s paintings and as the case escalates, the entire squad gets involved, first informally, then by assignment when a link to terrorism is discovered by the CIA.

Abramson’s Saints Squad series books are loosely connected stories with each novel standing alone and each featuring a different member of the squad, though since they are a finely honed team the characters overlap with the major characters of one story serving as secondary characters in the other volumes.

This volume, like the others, is fast -paced, presents a national security problem/mystery, and is resolved with a great deal of action and careful timing.  It also presents a love story as one more “Saint” meets his romantic match.  Abramson doesn’t dwell on in-depth character development.  Her characters are only fleshed out enough to make them sympathetic to the reader while plot development and action receive the greater amount of attention.  The romance portion of the book is pretty standard, while the action is the more compelling part of the story.

Abramson began life in Arizona, but has lived in the Washington D.C. area most of her adult life.  She attended BYU, then accepted a position with the Central Intelligence Agency.  When her children were small, she felt the need for a tamer career, left the CIA, and became a high school swim coach and took up writing. This is her ninth novel.