The Calling of an Apostle | Meridian Magazine

The Calling of an Apostle 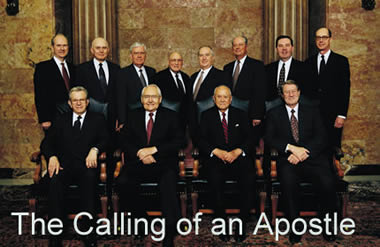 One of my favorite teaching moments of the Church History tour I lead each year is when I gather the group around an obscure, wind-swept corner of a wrought-iron-fenced lot in northwestern Missouri.  A large stone, now covered with a glass case, lies on the ground before us.  I cannot say exactly why, but when I start to tell the story that happened at that very spot, the Spirit just comes.  The place is the southeast corner of the Far West Temple, and the ground whereon we stand is holy.

There is nothing I can do to make the story more powerful than it already is.  I pause at certain crossroads of the plot—pause not for drama—but to compose myself to keep telling the story.  It is a story of not just faith, but super faith and obedience.

A Revelation and Directive

Far West was a bustling miracle on the most remote prairie of the United States.  On Thursday, the twenty-sixth of April, 1838, a revelation had been given through the Prophet Joseph Smith that “in one year from this day let them re-commence laying the foundation of my house.” [1]   The revelation was directed to the leaders of the Church.

Six months and five days later Joseph Smith and many of the leaders of the Church would be taken prisoner and thrown into obscure dungeons in Richmond and Liberty.  The entire body of the Saints would be driven from Missouri by lawless mobs under an executive order from the governor.  Volumes have been written on all that the Saints suffered in that horrible winter of 1838-39.

In an ironic and poignant moment in Church history, two bodies of leaders passed each other like two ships in the night.  Joseph and Hyrum and their fellow prisoners from Liberty had been allowed to escape and they were headed eastward to the Mississippi and on to Illinois.  Another group, part of the Quorum of the Twelve, was headed westward, deep into enemy territory, to fulfill the Lord’s desire for them to lay the cornerstone of the Temple and from thence make their way on their missions.

The enemies of the Church, including many apostates, had sworn that this prophecy would not be fulfilled.  One of the lost sheep, Isaac Russell, had been with that first mission to Preston, England and had experienced the miracles of the work along the shores of the River Ribble.  He yet lived in Far West.

Sometime after midnight on Friday, April 26, 1839, this small group of faithful apostles and other faithful gathered around the southeast corner of the Far West temple site—a temple that was never built.   “Part of a hymn was sung, on the mission of the Twelve.  Elder Alpheus Cutler, the master workman of the house, then recommenced laying the foundation of the Lord’s House, agreeably to revelation, by rolling up a large stone near the southeast corner.” [2]

Here is the part that becomes tender for me.  Remember, they are surrounded by their enemies on every side.  It is the middle of the night.  And yet, there they were to fulfill the prophecy of their beloved Joseph whom they assumed was still in prison. Brigham Young, Heber C. Kimball, Orson Pratt, John E. Page, and John Taylor (Elder Taylor had only been a member of the Twelve for four months) then “proceeded to ordain Wilford Woodruff, and George A. Smith, (who had been previously nominated by the First Presidency, accepted by the Twelve, and acknowledged by the Church), to the office of Apostles and members of the quorum of the Twelve, to fill the places of those who [had] fallen.” [3]   Here on this holy ground, in the middle of the night, these special witnesses were ordained and set apart.  Maybe something of the spirit of that quiet meeting lingers there at the southeast corner of the temple lot.  I cry every time I tell the story—but the story doesn’t end there.

There was some expediency in leaving before daylight, but after the group has sung the hymn “Adam-ondi-Ahman,” as the group began to leave (there were at least eighteen other saints present), Brother Theodore Turley said to Elder Woodruff and Elder Page, “‘Stop a bit, while I bid Isaac Russell good bye;’ and knocking at the door, called Brother Russell [who had left the Church]. His wife answered, ‘Come in, it is Brother Turley.’ Russell replied, ‘It is not; he left here two weeks ago;’ and appeared quite alarmed; but on finding it was Brother Turley, asked him to sit down; but the latter replied, ‘I cannot, I shall lose my company.’ ‘Who is your company?’ enquired Russell. ‘The Twelve.’ ‘The Twelve!’ ‘Yes, don’t you know that this is the twenty-sixth, and the day the Twelve were to take leave of their friends on the foundation of the Lord’s House, to go to the islands of the sea? The revelation is now fulfilled, and I am going with them.’ Russell was speechless, and Turley bid him farewell.” [4]

At this point, I say to the group—now this is faith and super faith.  [Isaac Russell would come back into the Church, Wilford Woodruff would be an apostle (including his more than nine years as president of the Church) for fifty-nine years and five months, and George A. Smith, first cousin of the Prophet and Patriarch, would serve in that calling for thirty-six years and five months.]

The Calling of an Apostle

We’ve all had the calling of an apostle on our minds these past two months as we lost our beloved Elder Neal A. Maxwell on July 21st and our dear and tender Elder David B. Haight just ten days later.

The apostles hold the keys of the kingdom of God on the earth.  “For unto you, the Twelve, and those, the First Presidency, who are appointed with you to be your counselors and your leaders, is the power of this priesthood given, for the last days and for the last time in the which is the dispensation of the fullness of times.  Which power you hold, in connection with all those who have received a dispensation at any time from the beginning of creation; for verily I say unto you, the keys of the dispensation, which ye have received, have come down from the fathers, and last of all, being sent down from heaven unto you.” [8]

A Small Act of Following the Apostles

I have written a number of things in the empty pages at the back of my scriptures.

I have a list of the fifty-six signers of the Declaration of Independence.  I have the names of the 55 delegates who attended the Constitutional Convention (including the thirty-nine who became signers).  I have a running list of all the temples and when they were dedicated and by whom (I write with a very fine pen).  And, that I might keep my mind more fully riveted on the apostles and prophets, I have a list of the ninety-two who have been called to the Quorum of the Twelve (soon to be ninety-four) including a separate list of the fifteen who have served as president of the Church.  With each I have the date they were called and the date they passed away and the total time of service as an apostle.  I have tried to record in my journal the feelings I have had to be in the presence of these special witnesses.  I love these brethren.

“As a Master in Israel, Jesus began gathering disciples—those who would learn His ways, do His will, and enter into complete fellowship with His work.  Jesus came walking by the shore of the Galilee and saw Andrew and Peter as they were casting their nets into the sea.  He called out to them, ‘I am he of whom it is written by the prophets; follow me, and I will make you fishers of men.’  In the Hebrew, this expression to bid another to follow was a permanent call.  ‘And they, believing on his words, left their net, and straightway followed him.’” [9]

The Lord said to his apostles just before he was crucified:  “This is my commandment, That ye love one another, as I have loved you…Ye are my friends, if ye do whatsoever I command you.  Henceforth I call you not servants; for the servant knoweth not what his lord doeth:  but I have called you friends; for all things that I have heard of my Father I have made known unto you.  Ye have not chosen me, but I have chosen you, and ordained you, that ye should go and bring forth fruit, and that your fruit should remain:  that whatsoever ye shall ask of the Father in my name, he may give it you.  These things I command you, that ye love one another.” [10]

A Testimony from President Packer

President Boyd K. Packer said, “Paul taught that the apostles and prophets were called ‘for the perfecting of the saints, for the work of the ministry, for the edifying of the body of Christ,’ and he declared that these offices would endure ‘till we all come in the unity of the faith, and of the knowledge of the Son of God.’”

President Packer continued, “Recently President Hinckley reminded the Brethren that, while we are men called from the ordinary pursuits of life, there rests upon us a sacred ministry. And we take comfort in what the Lord said to the original Twelve: ‘Ye have not chosen me, but I have chosen you, and ordained you.’

“While each feels his own limitation, there is strength in unity. Never in the history of the Church have the Brethren of the First Presidency and the Twelve been more united.

“Each week we meet together in the temple. We open the meeting by kneeling in prayer, and we close with prayer. Every prayer is offered in the spirit of submission and obedience to Him who called us and whose servants and witnesses we are.

“The Lord requires that ‘every decision made by either of these quorums must be by the unanimous voice of the same’ and that ‘the decisions of these quorums … are to be made in all righteousness, in holiness, and lowliness of heart, meekness and long suffering, and in faith, and virtue, and knowledge, temperance, patience, godliness, brotherly kindness and charity.’ This we earnestly strive to do.

“We know that we hold the power of the priesthood ‘in connection with all those who have received a dispensation at any time from the beginning of the creation.’ We think of those who have preceded us in these sacred offices, and at times we feel their presence.

President Packer concluded, “The most precious thing we have to give is our witness of the Lord, our testimony of Jesus Christ.

“I certify to you that the 14 men with whom I share the ordination are indeed Apostles. In declaring this, I say no more than the Lord has taught, no more than may be revealed to anyone who seeks with a sincere heart and real intent for an individual witness of the Spirit.

“These men are true servants of the Lord; give heed to their counsel… There are limits to what the Spirit permits us to say.  And so I close with my witness, my special witness, that Jesus is the Christ, that through a prophet-president He presides over this, ‘the only true and living church upon the face of the whole earth.’” [11]

I add my witness that these 15 who are called are prophets, seers and revelators and that they hold the keys of the kingdom in these last days.

[9] Maurine Jensen Proctor and Scot Facer Proctor, Source of the Light, A Witness and Testimony of Jesus Christ, the Savior and Redeemer of All. Deseret Book, Salt Lake City, 1992, p. 74 (emphasis added).