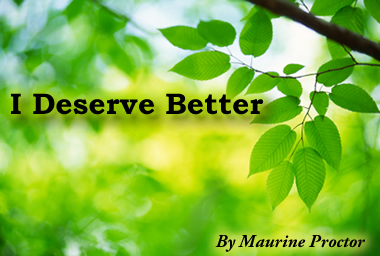 Most of us are quite certain that things could be better for us. We carry with us what poet Philip Larkin called, “A joyous shot at how things ought to be.”

Something inside tells us we were born for more, that only rarely have we known the joy we could experience, that only in moments have we received enough love. We yearn for a completion that we rarely have; we long for a brighter light to burst through our sometimes dim days. Too often we feel like strangers wandering far from home and only in those moments when we intensely feel the Spirit do we think, “Yes, I have come home.”

But for most of us, in most of our days which seem at the same time both too long and too short, too tedious and too hectic, there is a part of us that says, “This is not it. This is not what I came to be or to do. We may feel something is missing or that something is broken that should feel whole.

That sense of something missing–of what ought to be and isn’t–plays out in many ways. We can imagine a brighter, beaming summer full of laughter, where it didn’t rain so much. We can imagine better vitality, so we didn’t wake up dragging, weighed down with all there is to do. We can imagine sweeter relationships with more appreciation, surrounded by people who seem to understand our deepest core. We can imagine a life where our plans worked out as we anticipated, where we knew no loneliness or ill health, where our children always did the thing we hoped they would.

As Latter-day Saints we know that that longing and yearning is in large part because we are strangers here who have “wandered from a more exalted sphere.” Some part of us wants more because we have had more. We have known a wider sphere for our talents and have felt a deeper love. We have seen a more radiant light. We can imagine heavenly things because we have known them and some distant part of us remembers. We know we weren’t made for this earth because something inside so clearly understands that there is more.

The Lord would have us use these longings to draw us to Him. Our seeking the light can, in fact, lead us to the Light.

Satan, however, employs those yearnings we have against us. He makes us miserable telling us that we are entitled to way more than we are getting. “You deserve better,” he sneers. He takes our natural frustration that seems to be a part of most of our lives and says, “You are entitled to more. Entitled, do you hear me? Somebody has gypped you or purposely frustrated you. The universe has conspired against you. No, it was God Himself.”

This wider world that we can so easily imagine can be twisted by Satan into a full-time resentment that things aren’t as we would have them be. Our hearts can become burdened with the disparity until we cannot enjoy what we have and instead of being grateful to the Giver for what is, we are silently aggrieved for what is not. 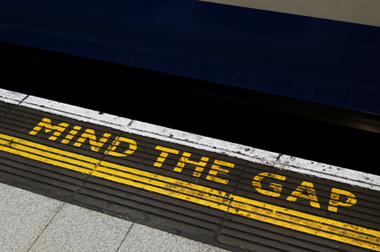 In London, the famous Underground has signs in every car that say “Mind the gap,” and when it is time to dismount at your subway stop, a friendly voice reminds you again, “Please mind the gap.”

Americans would say, “Watch your step,” because all of this warning is about a little gap between the train and the floor.

However, when we were in London, with that “Mind the gap” mantra repeated a thousand times in my mind, I began to think about that gap that is so often there between what is and what we wish things to be. Do we mind that gap–meaning are we troubled by that gap? Do we mind it a lot or just a little? Are we bothered by what life is, or what a particular relationship is, or what an event is and what we thought it would be?

That gap can be Satan’s playground in our life. He can exploit it so that we travel through our time here with disappointment or with an aching sense of loss. Or worse, that gap can blossom into full-scale entitlement and resentment. “I wanted better. I deserved better–and life didn’t deliver.” We may think that justice hasn’t been fully served in our life because we tried hard and got less.

This outlook can lead to all sorts of mischief in our lives. It is a groundwork for sin. God becomes an easy target for our blame. We may turn from him or at least step back a few paces, thinking he has let us down. Why pay such intense devotions to Deity if life is so often going to be a rocky road anyway? Isn’t He there to help us?

Or we can sink into self-pity about what should be and isn’t, ever aware of what we think we deserve and never got. We can become absorbed with our losses, hung up on our pain, paralyzed by disappointment because the way didn’t get smoother.

Scot, my husband, once had a dream that we were in a car that had to exit the freeway and came into a construction zone where it was difficult to pass. All kinds of obstacles were thrown in our path, huge boulders larger than our car were strewn in our way and roads were torn out and impassable. The going was slow as we picked our way around blasted out concrete and blinking detour signs. We felt assured that we would get through this terrible construction zone and back onto the freeway. We just had to patiently manage the obstacles that came in our way.

Through the years we have periodically asked each other, “Do you think we are on the freeway yet where our progress can be fast and smooth?” and we have had to answer laughingly, “Not yet. I think we’re still in the construction zone.”

This gap between what we want and what really is can also lead us to blame others. They don’t love us enough or aren’t agreeable enough. They disappoint us and our love for them is tarnished. Can’t they just appreciate us or see our point of view?

One night years ago I had planned a sisters’ night for the six girls in our home. I talked about it for weeks ahead so the girls would leave that night open. I had envisioned scenes straight out of Little Women with our singing around the piano together in harmony and then sewing cloth dolls for their bedrooms. What really happened was that one of the girls got mad while we were singing, feeling she was left out. She didn’t like her alto part and then decided she hated the song too. Then others decided the doll was too hard to make and one by one they found their reasons to be angry and huffed away. Only the youngest were left as I sat by the sewing machine trying to work on one of the dolls. Then the sewing machine jammed.

The dolls remained unfinished, tossed away somewhere in a box in the garage.

Oh, how I could be the perfect mother if only I didn’t have children!

Most vacations aren’t “dream” but have a lot of stripping down at airport security lines and lugging too-heavy luggage. Christmas does not look like a Currier and Ives painting. Age creeps upon you before you’ve figured out how to be bold and young. Just when you thought you deserved a promotion, you get laid off.

We all have our own variations on what we hoped would be and what is, but the main issue is that we don’t let this marvellous, God-given facility to envision and imagine and hope and dream become a tool by the Adversary to promote despair, resentment and cynicism.

Feeling entitled and that we deserve better becomes a terrible, snarly burden to carry. Some things we can change in our lives. Some things we really need to change. We don’t have to be abused or stay in places that are dead-ends and life-killing.

Many things, however, are just a product of life on this earth. The gap between what is and what we wish it to be is part of the mortal experience, not because we have personally been robbed. We might think of life on this earth as a contract that we made with God, knowing full well that we would not be surrounded by perfect people or perfect circumstances. There is real joy in accepting the terms of the contract without a constant fight.

The fight is too draining; the sense of disappointment too keen and the opportunity for Satan to exploit our pain too easy if we spend our lives kicking against the pricks.

I thought of the power of accepting the terms of the contract here in mortality one night when I heard my mother-in-law Martha Proctor talking. She is a joyous person, noted for her zest for life, and at 88 was putting in a new kitchen with double ovens so she could do more entertaining.

In cleaning out her old kitchen, she saw that one set of dishes that should have had 12 plates, now had five, that another set of 16 now had 10. She saw that the set of 10 goblets was down to seven. “I didn’t lament these breakages and losses,” she explained with a smile. “It is a state of normalcy.”

That term echoed through my soul and I carried it away with me like a memento in my pocket from our evening together. State of normalcy. Accepting the terms of the contract. Living for a short season on earth where only in moments and snatches is everything what we know it could be, as President Hinckley taught, “interspersed only occasionally by beautiful vistas and thrilling bursts of speed.” What power there is in that understanding.

It frees us to love what we have, instead of rue what we have not. It opens our eyes to see what is already around us in all of its glory and abundance instead of seeing things as a shadow of what they could be.

Life is not a problem-free adventure, but a problem-solving one–and the sooner we can really know that, the easier the problems become. It is not a place where our best plans and hopes are always realized, but often we are given something more or deeper- even if it is just new qualities of soul.

The voice on the London Underground may say, “Please, mind the gap,” but I am learning to say to myself, “Please, don’t mind the gap” between what really is and what I imagine it could be.