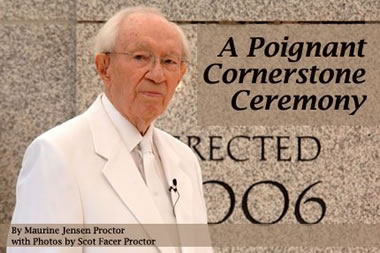 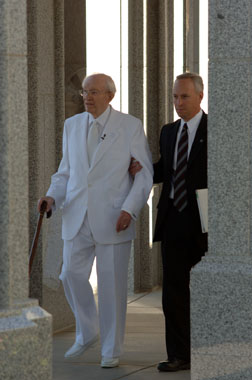 In fact, it took 167 years to build the first 50 temples and only 40 months to the day to build the next 50.  When President Hinckley first announced that he had set a goal of building 100 temples, many thought it was a reach, but reaching becomes him.  The 124th temple will be dedicated next month in Helsinki, Finland. 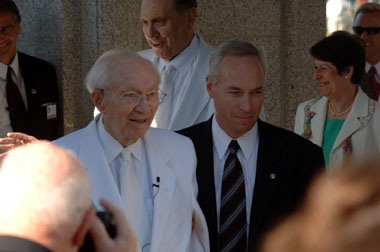 The Church has another 10 temples announced or under construction. 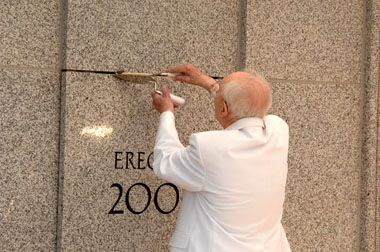 So you think with all this experience, he would be an expert at getting the “mud” in the joint of the cornerstone, yet President Hinckley, wearing his all-white temple suit, joked when some of the mortar fell to the ground.  “We have a lot of experience,” he said, “But we haven’t learned much.” 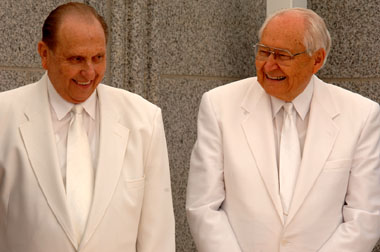 The Sacramento temple had four dedication ceremonies sent via satellite to 21 stakes in the temple district.  The cornerstone ceremony was held near the beginning of the first dedication ceremony, when President Hinckley, President Monson, Elder L. Tom Perry and their party exited the temple to cement the last granite block into the building. 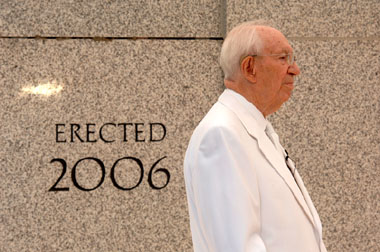 President Hinckley, 96, was operated on for cancer in January, but according to his son Elder Richard  G. Hinckley he is doing well.  “He is remarkably facile, remarkably connected, and remarkably on top of the issues.  He is very much in charge and very much present. 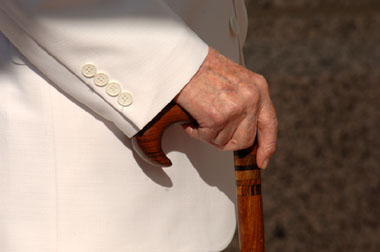 ”It takes a great deal of energy to lead the Church, and he has had to learn to pace himself,” Elder Hinckley acknowledged. “In years past, he might have spoken at as many as 12 dedicatory sessions for a temple.  Now he speaks less often and more briefly.”

It has long been President Hinckley’s practice to call at least two little children up to add mortar to seal the cornerstone.  This time his choices were more significant than even he knew. 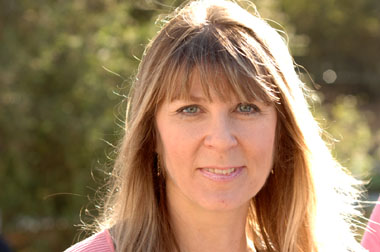 Dana Sanders of Auburn, California is a young mother who was singing with the choir on the other side of the platform where the cornerstone ceremony happened.  Therefore, she didn’t realize at first that President Hinckley had chosen her 8-year-old son, Joshua, to come up to stand by him and put mud in the joints of the cornerstone. 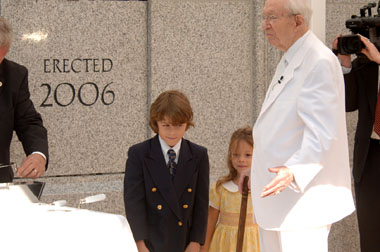 She was already filled with the significance of the day.  The Sanders’ younger daughter, three and a half-year-old Emily, loved the temple.  She had been asking for a long time when she would be able to go the temple, and when Dana said, “When you are twelve,” she had thrown both of her hands up in the air and said, “Hurrah!”

When her family took a trip to San Diego and she first glimpsed the temple there, she burst out of the car door, singing, “I Love to See the Temple.”  She also wondered if the courthouse in her hometown might be a temple, because it was lit up at night.

She had been particularly excited when thousands of stones had been passed out to Primary children in the temple district so that each one could put his or her name on one before the stones were put into the temple foundation.

Emily was definitely looking forward to having the Sacramento Temple near her home.

Then one day last summer — July 5, 2005 — she ran into the road to chase an ice cream truck and was killed when she was struck by a car.

“Two times before when Emily was in danger, I had had specific warnings,” said Dana.  “Once in the shower I had the strongest impression, ‘Find Emily’ and I jumped out and ran to find her just as she was going down our driveway toward that same busy street.  That day I had no foreboding feelings.  It was just a normal day.” 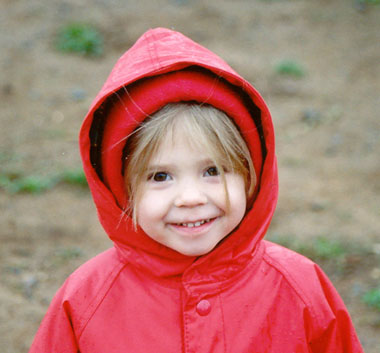 “We are comforted knowing that Emily is happy, but the hard part is missing her.  My children all very much have the knowledge that we’ll see her again.  We never have a prayer that we don’t say, ‘Please Heavenly Father, tell Emily that we love her.”

“We have been looking forward to having this temple near us.  This is an extremely special temple because Emily’s rock is here. The temple is the closest we can come to the spirit world and to me it means coming close to Emily and to Christ.” 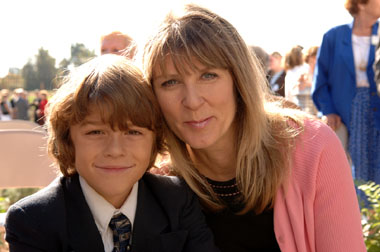 What a blessing that her son, Joshua, could be called to help the Prophet on this day.

Four year-old Megan Johnston of Sacramento wanted with all her heart to put in a little of the mortar around the cornerstone and her mother, Ana, was hoping that one of her three children would be able to be near the Prophet.  When the prophet turned and motioned to the little girl in yellow to come and stand by him, she was ecstatic. 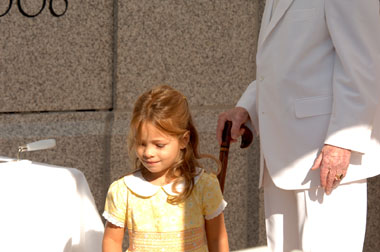 Her mother said that she had her own unique 4-year-old interpretation of the moment.  After she went running to everyone around her and told them, “I won!  I won!  I saw the Prophet!!!  The Prophet asked me to help him fix the wall.” 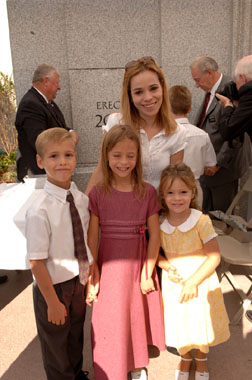 Ana Johnston and her three children

Tears were streaming down Ana’s face after the ceremony and she was filled with gratitude that she had not only come two hours early, but that this blessing had been extended to her family.

Joseph Smith called the southeast corner of the temple very significant and the place of greatest light.  At the placement of the southeast cornerstone of the original Nauvoo Temple, the Prophet Joseph said, “This principal corner stone in representation of the First Presidency, is now duly laid in honor of the Great God; and may it there remain until the whole fabric is completed; and may the same be accomplished speedily; that the saints may have a place to worship God, and the Son of Man have where to lay His head. 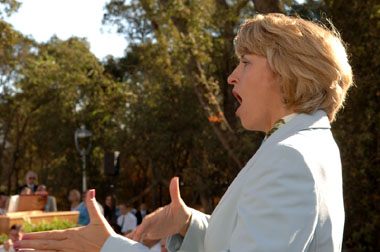 An exquisite choir filled the air with music, offering their prayer of song unto the heavens.  All who were present felt the power of those prayers and the Spirit was felt in the hearts of the onlookers. 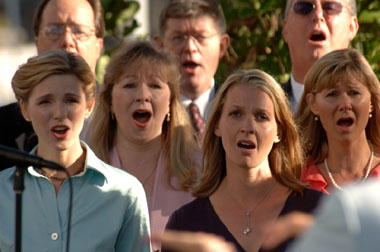 Others who participated in this special ceremony outside the Sacramento temple at the southeast corner included President Thomas S. Monson, Elder L. Tom Perry and his wife Barbara, Elder Ronald Rasband and his wife, Melanie, Elder Richard G. Hinckley and his wife, Jane and the entire Temple Presidency and their wives. 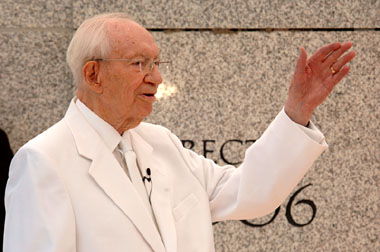 As always, President Hinckley gave a friendly wave to the crowd as he left them and headed with his associates back into the temple to conduct the rest of the first session and offer the dedicatory prayer.