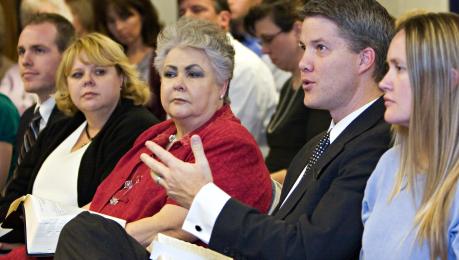 Mormons scored the highest of all religious groups in their knowledge of Christianity and the Bible in a new study conducted from the Pew Research Center. Conducted in May and June of this year, the nationwide poll of 3,412 individuals included 32 questions about various aspects of religion: the Bible, Christianity, Judaism, Mormonism, world religions, religion in public life, and atheism and agnosticism. 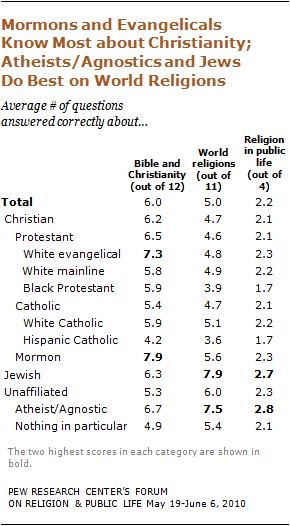 Looking at the average of all 32 questions, the Pew Study notes:  “On average, Americans correctly answer 16 of the 32 religious knowledge questions on the survey… Atheists and agnostics average 20.9 correct answers. Jews and Mormons do about as well, averaging 20.5 and 20.3 correct answers, respectively. Protestants as a whole average 16 correct answers; Catholics as a whole, 14.7. Atheists and agnostics, Jews and Mormons perform better than other groups on the survey even after controlling for differing levels of education.” 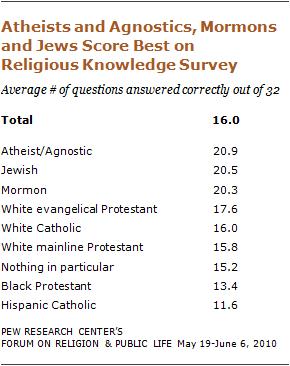 Why did Mormons do so well on the survey?  USA Today postulated that “It may be that the conscious choice to take a minority faith or philosophic stand requires an intellectual engagement with religion to a greater degree than experienced by Protestants and Catholics, who dominate U.S. culture.”

The answer for Latter-day Saints, however, seems more obvious than that.  Michael Otterson, manager of Public Affairs for the LDS Church wrote on The Washington Post’s On Faith blog:

Why am I not surprised that Mormons came at or near the top of the list for knowing “stuff” about their own faith and others? Mormon children from the age of three attend classes called Primary. There, they learn not only the rudiments of their faith but have many opportunities to share short talks in front of other children. There are very few Mormon kids by age 12 that have not had experience in standing before a congregation including adults, and sharing their thoughts on some religious topic or other.

At age 14, they begin a four-year course known as seminary. In most places in the world this involves before-school classes, which study and debate the Old and New Testaments of the Bible as well as Church History and the Book of Mormon. This is in addition to whatever they may learn at Church on Sundays (two hours of scripture-based religious instruction as well as an hour-long worship service). Or at home around the dinner table when the conversation turns that way. Or in personal scripture reading. Or in what is known as family home evenings every Monday night. Then, of course, there are those two-year full-time missions around college age, with the intense internalizing of principles that this service often brings.

What the Public Knows about Mormons

So what does the public know about Mormons, according to the study?  Three questions on the survey concerned Mormonism with these findings: “Around four-in-ten Americans know that the Mormon religion was founded sometime after 1800 (44%) and that the Book of Mormon tells the story of Jesus appearing to people in the Americas (40%). About half (51%) correctly identify Joseph Smith, founder of the Church of Jesus Christ of Latter-day Saints, as a Mormon.”

The Pew Study reports: “Mormons clearly know more about their own faith than others do about Mormonism. On average, Mormons get 2.7 of the three questions right, with eight-in-ten Mormons (81%) answering all three questions correctly. Atheists/agnostics (2.1) and Jews (1.9) each get an average of roughly two of these questions right, with members of other religious groups exhibiting significantly lower levels of knowledge about Mormonism.”

The Most Intriguing Questions

The most intriguing questions of the survey, however, are what the public doesn’t know about religion and why atheists and agnostics scored so well. Only about half the public know the Four Gospels or that the Golden Rule isn’t one of the Ten Commandments or that Martin Luther inspired the Reformation.  In a country that claims itself as so religious, how can such a general level of ignorance prevail?

As USA Today says, not only does the Bible elude us, but “doctrines don’t grab us” as Americans. “Only 55% of Catholic respondents knew the core teaching that the bread and wine in the Mass become the body and blood of Christ, and are not merely symbols. Just 19% of Protestants  knew the basic tenet that salvation is through faith alone, not actions as well.”

Why non-believers scored so well, according to most analysts, is because they have taken an unpopular position that they frequently have to defend.

Otterson also brings up another important point in his On Faith blog:

So, we should note that the Pew study was about superficial knowledge, and not about religiosity or spirituality. Previous studies have addressed this, and I’m pleased that Mormons show up well in both. Yet knowing that Genesis is the first book of the Bible or that Jesus Christ was born in Bethlehem has nothing to do with the quality of my life’s religious experience. What was it that Paul said of some of his contemporaries? – “Ever learning, and never able to come to the knowledge of the truth.” (2 Tim. 3: 7).

Applied knowledge is something else entirely. If my knowledge of scripture offers me lessons in life, or suggests cause and effect, or offers moral insights, prompts conscience or strengthens faith, then its value is self-evident. One can have faith in God and live accordingly without producing proof of a theological degree or demonstrating academic-like mastery of biblical history.