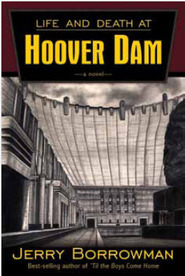 Life and Death at Hoover Dam is Jerry Borrowman’s newest novel and is a fascinating glimpse of the largest public works project ever attempted in America and possibly the world. It begins in 1931 when men were desperate for jobs and minority workers were faced with greater difficulty than others in obtaining employment even on major government financed projects.

Two brothers play major roles in the dam’s construction. David Conroy is an engineer and Pete is a crew foreman.  David works closely with Frank Crowe, the legendary chief engineer of the project, and is responsible for keeping the men from being asphyxiated by the gasoline fumes in the tunnels.  He’s also married, leaving his wife behind in Idaho to face  problems with a teenage son looking for trouble and her brothers who takes advantage of her and their father.  Pete is on the wild side, but fiercely loyal to his crew who do the scaling while dangling from ropes over the Colorado gorge.

Tony Capelli, son of an Italian immigrant and his friend Nick, travel from California to the Arizona/Nevada border looking for work on the massive sixty story dam that when finished will not only tame the turbulent Colorado River and provide power for thousands of people in the southwestern states, but will end the flooding and drought periods destroying the agricultural endeavors of the fertile Southern California valleys.  In spite of the insults and mean-spirited treatment they receive, Tony and Nick with the help of Pete, land  jobs on the dam.  The racial persecution and bigotry chase Nick away in a short time, but Tony stubbornly hangs on.

Other characters’ stories are also woven into this story, giving glimpses of the 20,000 men who worked on this massive project. The work was hard, but the pay was good for that era, and men desperate for jobs flocked to the project.  Each had a story.  Some lived in a nearby housing area built for the workers and their families, but many spent years separated from their families in order to support them.  The stories of these men and their families include all the drama of human life and death.

Interspersed through this novel are black and white photos of the dam at various stages.  They are an intriguing glimpse of the progression of an almost unbelievable project. The cover is a sketch by Eden Borrowman, a daughter-in-law of the author.  It shows amazing detail, but the perspective doesn’t do the dam justice.

Most Americans today can’t quite visualize a time when Italians and the Irish were considered undesirable minorities, but we can readily see parallels to the racial equality problems of our own day in the vivid picture Borrowman paints of the crude disregard for the rights of minority applicants and workers in this novel.  Borrowman has a gift for taking a slice of history and not only putting his reader in it, but making it possible to see parallels in our own time.

The true main character of this book is the mighty Hoover Dam itself.  That is the story that unfolds from the time when the wild muddy river flowed through spectacular, deep Black Canyon until it becomes a mighty fortress holding back the largest man made reservoir in the United States, Lake Mead.  Like most government projects, the construction of Hoover Dam faced its share of political maneuvering.  It started out as the Boulder Canyon Project, then was changed to the Hoover Dam by the secretary of the interior under President Hoover.  When the Roosevelt administration came into power they changed it Boulder Dam.  Finally Congress changed its name back to Hoover Dam.

I would have liked to see more character development for most of the major characters, and other than getting the dam built, there isn’t a strong overall plot line, though there are sub plots related to each significant character.  I enjoyed this book and I believe others who are interested in important milestones in history will like it too.  The trivia or numerous details involved in such a huge undertaking are fascinating in their own right.  It’s staggering to try to visualize the impact of this dam on the Western United States. Without it, Las Vegas would still be a dusty small town, there would be no palm trees in Los Angeles, and millions of dollars worth of fruit and vegetables would never exist to reach dinner tables all over the country.