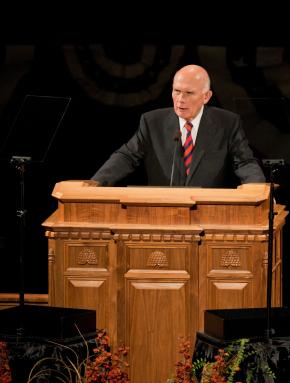 An apostle for The Church of Jesus Christ of Latter-day Saints said today the United States Constitution is a singular document whose fundamental principles must be understood, valued and protected.

Elder Dallin H. Oaks made the remarks in his keynote address at the Constitution Day Celebration held in the Tabernacle on Temple Square. The event was presented by the University of Utah’s Hinckley Institute of Politics and America’s Freedom Alliance.

Elder Oaks’s interest in and understanding of the Constitution is the product of a legal career that spanned more than 50 years. He is a former professor of law and Utah Supreme Court Justice and widely considered an expert on the U.S. Constitution.

Elder Oaks stressed that his remarks were focused on the “long view” and were not an endorsement or condemnation of actions or specific proposals on current issues. “I know that some will apply what I say — one way or another — to issues currently being reported in the media,” he said. “But I do not seek to be heard for the short term.”

To sustain and protect the Constitution and its principles, Elder Oaks suggested five responsibilities every citizen should undertake: understand the Constitution, support the law, practice civic virtue, maintain civility in political discourse and promote patriotism.