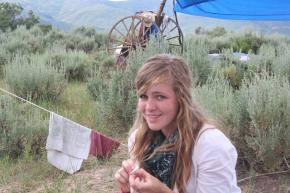 The contemporary pioneering journey was completed in eight hours on a trans-Atlantic flight from France to Salt Lake City, a startling contrast to the months-long expeditions endured by the 80,000 pioneers who migrated to the Utah mountains from 1847 through 1869. Laura, 15, and a second-generation member of The Church of Jesus Christ of Latter-day Saints in her native France, arrived in Utah this summer as an English student but found herself involved in a youth activity, a four-day pioneer trek commemorating the tedious journeys of the early Utah settlers.

The young French woman can easily be described as a religious pioneer in her country where she is the only member of the Church in her 2,300-student high school. Yet as she joined the rugged, mountain expedition in Salt Lake City, she recognized contrasts. “I arrived here so quickly compared to the pioneers who came from my country so many years ago,” Laura observed.

During the reenactment, she hiked nearly 30 miles over rocky terrain and up steep hills. Laura donned pioneer costume, ate from a tin plate and slept on the ground. “I couldn’t have done this in France,” she explained. “We have girls’ camp every year, but on the trek we could really feel like the pioneers. We had to be strong, to work; we had food, but they had little food. I was tired, but it was a great experience.”

Those historic pioneer journeys of the mid-1800s are celebrated throughout the Church each year on 24 July. With parades, picnics, dramatic and musical pageants or actual trekking re-creations, young and old, newly baptized and long-term members pause to honor and acknowledge the pioneer heritage of the early Church.

More than 350 wagon trains and 10 handcart companies delivered early members of the Church to the Utah Territory during that 20-year period before the railroad was completed in 1869. Following several relocations in New York, Ohio, Missouri and Illinois, the body of Church members, under the direction of Brigham Young, settled more than 400 communities in the western territories. An online library of stories depicting life on the trail is available through the Church History Department.

The Mormon community in France was small when Laura’s grandparents and her mother, Therese, at that time 10 years old, joined the Church in the early 1970s. “There were scattered branches of the Church in central France at that time and no stake organization. It was our dream to have a stake,” reported Reid Robison, who served as a full-time missionary at that time. “Laura’s family is among those first-generation pioneers in France.”

“My friends don’t understand about the Church,” Laura explained, “but when we meet as a stake now, it feels like I have beaucoup friends, even though it’s an hour and a half to the meeting. We go to Frankfurt for a temple trip, and that’s more than 10 hours away.”

In a January 2010 address to young members throughout the world, Elder M. Russell Ballard of the Quorum of Twelve Apostles noted, “In many ways you are like the pioneers … except in your journey you face new and challenging circumstances. Each of you has your own personal challenges, and each of you is on the pioneer trail toward eternal life. You must always remember you are not alone. All over the world the youth of the Church are walking the gospel path with you.”

Laura knows that lonely pioneering path in France but now understands that thousands have trekked a similar path years before, some over rocky trails, through hot, dusty paths with limited food supplies and even loss of life. “I could really feel like a pioneer on the trek,” she said. “Sometimes I imagine my life in France is too hard, but now I know I can do it.”