Artists Who Help Us "See" The Book of Mormon | Meridian Magazine

Artists Who Help Us “See” The Book of Mormon

Historically, illustrations help convey the scriptural stories found in the Book of Mormon: Another Testament of Jesus Christ. Artists’ creations vary in concept and content. From the familiar compositions of Arnold Friberg (1913–2010), who passed away 1 July 2010, that define Book of Mormon characters in oversized, muscular terms, to the gentle, even romantic impressions created by Minerva Teichert (1888–1976), or to the contemporary realism employed by Walter Rane, stories from the scripture come to life on canvas.

“Often a painting is part of a personal testimony of the Book of Mormon,” suggests Dave Ericson, Salt Lake City art historian. “Rather than looking at reality of the setting, the painting’s purpose is to help develop faith, not to answer all the questions.”

“Friberg’s works have come to visually represent the Book for Mormon to the Church,” said Robert Davis of the Church History Museum. “People see themselves in the scriptures. They see what they look like, and to Friberg, the characters of the Book of Mormon looked like the strong and sturdy people of his own Scandinavian lineage.” 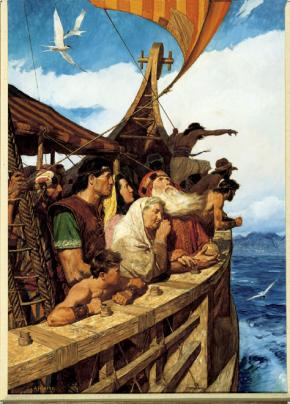 Contemporary Book of Mormon artist Walter Rane agrees. “It’s not the costumes or the architectural features or the facial characteristics that are important in a scriptural painting; it’s the feeling created in the observer.” (See online exhibit of Rane’s paintings).

George Martin Ottinger, (1833–1917) a pioneer Utah artist, employed his youthful traveling experiences to create the first known illustrations of the Book of Mormon. Ottinger, as a teenager, traveled through parts of Central and South America and transferred his observations to canvas in several scripturally-based paintings, including “Joseph Smith Receiving the Plates from Moroni.”

Ottinger, along with contemporaries C.C.A. Christensen (1831–1912) and Danquart A. Weggeland (1827–1918), in 1891 developed a series of posters, commissioned by the Deseret Sunday School Union, to convey the stories of the scripture. “These early artists painted illustrations to be used in Sunday School classes,” explained Kirk Henrichsen of the Church History Museum. “They used ideas from the book of Nephi and created a series of what we would now call visual aids for teachers.”

Adele Cannon Howells, (1886–1951), former general president of the Primary, the children’s organization of The Church of Jesus Christ of Latter-day Saints, personally commissioned Friberg to illustrate Book of Mormon stories for publication in the Children’s Friend, the children’s magazine of the Church. Howells envisioned a 12-part series of paintings, all removable from the magazine and used as posters in a child’s room, Henrichsen said.

Friberg published an explanation of his works in the December 1952 issue of the Children’s Friend, with four illustrations following in the January through April 1953 issues. Another four paintings appeared in the first four months of 1954, but the final four were published intermittently from 1961 through 1963. Eight of the illustrations were first published in a softcover edition of the Book of Mormon itself in 1961. Subsequent paperbound editions of the scripture still contain several of the Friberg compositions.

For another artist, Minerva Teichert, the images were gentler and based on the people she knew and understood. Teichert created her interpretations of Book of Mormon events in a series of 42 murals. According to her daughter, Laurie Teichert Eastwood, “For many years, pictures of events recorded in the Book of Mormon formed in Minerva’s mind. From 1949 to 1951, she created over 40 of those scenes in a series of paintings, first as oil sketches on paper and then as murals on masonite board.” 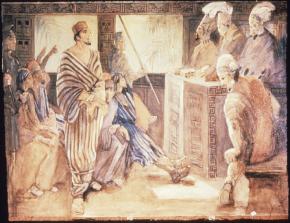 Despite her monumental creative effort, Teichert was unable, after repeated efforts, to get the illustrations published. She had hoped, Peter B. Gardner writes in BYU Magazine, “that the works might accompany the Book of Mormon text or be used as slides by missionaries or even sold as a book of paintings … but nobody wanted them.” After years of frustration, she donated the murals to Brigham Young University in 1969. Her murals were finally published in a 1997 volume edited by John Welch.

In 2001 Rane was, like Friberg, commissioned to create a series of Book of Mormon paintings, a series to serve as part of an art book on the subject. Rane was new to scriptural interpretation, having been a magazine illustrator for a number of years, but was anxious to try a different approach to illustrating the scriptures.

Rane created 19 paintings, which were published in a book entitled By the Hand of Mormon: Scenes from the Land of Promise, and also served as the subject of a 2004–2005 exhibit at the Church History Museum.

Numerous other printed volumes have included varied illustrations of the Book of Mormon, all with the intent to broaden the understanding of the scripture itself.

“Getting close to these characters and feeling their experiences as I paint,” Rane summarizes, “makes them feel like real people. Their struggles are the same struggles I have. Through my work I’ve developed a stronger feeling of closeness to the individuals in the Book of Mormon. I hope that those who view the paintings have a similar experience.”