For those who work behind the scenes of summer pageants of The Church of Jesus Christ of Latter-day Saints, there is little doubt as to what the driving force is behind these popular summer productions – the youth.

Mormon summer pageants, which kick off in Manti, Utah, are well known for dramatic displays of history from the scriptures and the Church. These pageants are the product of thousands of hours of volunteer work, and no group is more serviceable than the youth. 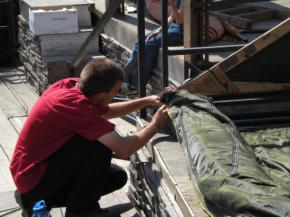 Take, for example, The Nauvoo Pageant in Nauvoo, Illinois. Two crews of 10 young men ages 17 to 19 help set up the pageant, run the show and take down equipment. In past years these young men came from as far away as England; this year they come from across the United States. Not only do these young men volunteer their time, but they also pay their own way.

Dave and Kathy Folkman are assigned to watch over these young men in Nauvoo.

“They literally work from 7 a.m. until midnight,” Kathy said. “It’s hot, dirty work and they love it.”

While many stages for such productions are powered by hydraulics, Kathy said the stage for the Nauvoo Pageant moves thanks to the muscle of these young men.

“We couldn’t do it without them,” Kathy said. “We truly couldn’t.” 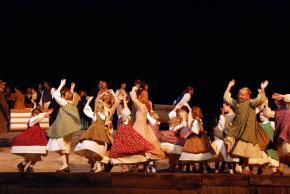 Korbin Goulding of Utah is one of the young men who will participate on this year’s crew that will set up the stage and lights. Goulding, who has been helping build a house from start to finish, was recruited to the crew by Dave Folkman, who lives in Goulding’s area.

“It will be a good experience learning how to build a stage,” Goulding said. “I’ve been looking forward to it. It’s a once-in-a-lifetime chance.”

The Nauvoo Pageant starts 6 July and was first performed in 2005 to commemorate the 200th birthday of the first Church president, Joseph Smith. In addition to the pageant, the Nauvoo historical sites feature daytime vignettes where cast members share the history of the site through smaller intimate performances.

This year’s Mormon Miracle Pageant started 17 June and has a cast of approximately 900. Manti Pageant president Douglas L. Barton said 600 cast members are 18 or younger, and they are a key force to set up the 14,000 chairs for the audience on the hill of the Manti Temple in one hour.

“We wouldn’t have [a pageant] without the youth,” Barton said. “A lot of the parts are geared around the youth.”

The Manti Pageant storyline covers the beginnings of the Church and the history of the pioneers who settled in the Sanpete Valley in Utah.

The Castle Valley Pageant starts 29 July and is performed in Castle Dale, Utah. This pageant portrays the trials, triumphs and tragedies of settlers in eastern Utah’s Castle Valley, who were called by Brigham Young in 1877 to colonize what is now Utah’s Emery County.

The Castle Valley Pageant is performed in an outdoor amphitheater that can seat 4,000 people. Before each performance, patrons can visit the nearby pioneer village and learn how to survive on a pioneer settlement.

Located in upstate New York, Palmyra is where Mormons believe Joseph Smith received divine visitations to restore the same religious doctrines that Jesus Christ had established when He lived on the earth. The pageant is performed on the Hill Cumorah, the place where Joseph Smith received the sacred record that later became known as the Book of Mormon. The pageant attracts anywhere from 6,000 to 9,000 people each night.

The storyline of the Hill Cumorah Pageant focuses on the history and message of the Book of Mormon. It emphasizes the belief that Christ is the focus of the Church, sent to bring peace and happiness to families and increase love among men and women.

Pageant president Dwight Schwendiman said there will be 700 cast members this year – 186 of which are young men and women ages 13 to 17.

Two other pageants, the Clarkston Pageant (held every other year) and the Mesa Pageant (held during the Easter season), are also produced by the Church.

Nauvoo, Illinois: A Tribute to the Prophet Joseph Smith