BANFF, ALBERTA, Canada – The Canadian Rockies, whose almost barren stone peaks jut into the late summer sky, couldn’t be better named. And there couldn’t be a more welcoming nor more scenic end-of-summer destination after record-breaking temperatures in the U.S. West. 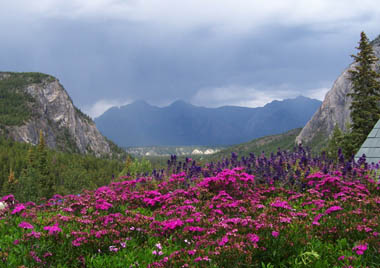 Over the years, Banff – Canada’s first national park – and its surrounding area have become one of our favorite places in the world to enjoy natural beauty. It features pine forests, glaciers, waterfalls, rivers, mountain meadows, and turquoise lakes colored by glacial melt, along with those majestic rocky peaks.

The place also provides plenty of opportunity to enjoy its wonders, from outdoor adventure to sheer relaxation. Whether you’re up for river rafting or a simple walk along the banks, you’ll find it around Banff. 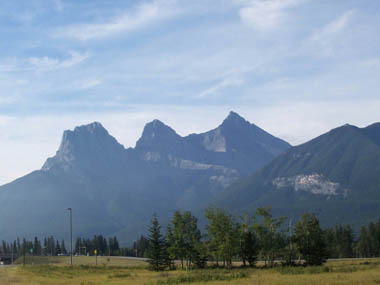 Almost straight north of Salt Lake City (a day-and-a-half drive or an hour-and-a-half flight), the sharply angled peaks beckon. The drive west from Calgary on the Trans-Canada Highway takes you through flat agricultural land, which gradually becomes rolling hills, then suddenly gives way to pine trees, with the jagged peaks of Banff National Park in the distance.

Calgary was the site of the 1988 Winter Olympics, and the place still offers a glimpse of the grandeur in a museum near the hard-to-miss ski jumps just outside the city. Further west, Canmore, the former coal mining town that hosted Nordic events in the Olympics, offers top-notch hiking and biking trails in summer and cross-country ski trails when the snow falls. And the ski runs around Banff townsite are legend.

But it’s the glorious summers we appreciate. 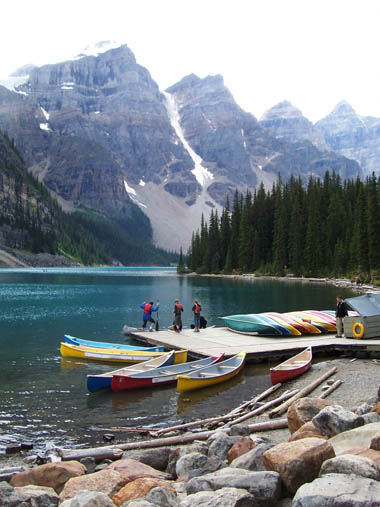 You can rent a canoe or enjoy a lakeside picnic at Moraine Lake, off the Lake Louise road.

Gondolas at various resorts offer a bird’s eye view of the scenic area, and tour companies stand ready to book whatever type of adventure you’re up for. As with many things, though, the best here cost nothing.

Grand old hotels, built by the railroad companies to lure visitors to the Canadian Rockies more than a century ago, feature stunning architecture in spectacular natural settings. They boast hundreds of high-priced rooms that are booked as much as a year in advance, yet their elegant lobbies, restaurants, and grounds are open to the public. 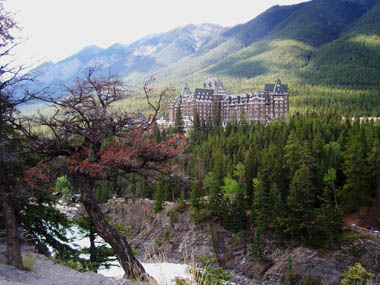 The Banff Spring Hotel rises like a castle from the pines. The public is welcome to visit.

In the town of Banff with its myriad motels, eateries, and shops, the Banff Springs Hotel rises like a castle amid the pines. Huge yellow daisies grace the entryways, and an elegant double stairway rises from the lobby to another public floor. You feel like you’re in a castle, only warmer.

Down the street at the administration building of Parks Canada, you can enjoy a leisurely stroll through the colorful, well-kept Cascade Gardens. Below the grand hotel runs the Bow River, whose wide, crashing falls can be both seen and heard up-close on the riverside trail.

(Neither locals nor tourists seem to have been deterred this summer by the major underground overhaul on Banff Avenue that’s turned several blocks of the city into a chain-link-fenced construction zone minus sidewalks.)

Chateau Lake Louise reposes in a completely different setting a half-hour east from Banff townsite. The 548-room hotel looks out on a turquoise lake and the glacier that feeds it. Delicate blooms of Iceland poppies and planters overflowing with colorful perennials decorate the graceful lawns, and a harpist’s music wafts through the elegant lobby. The many languages that can be heard as visitors trek the lakeside trail, attest to the cosmopolitan allure of this beautiful place.

A plein-air artist captures an image of Lake Louise on canvas.

Small but spectacular Moraine Lake lies on another road between Lake Louise and Lake Louise Village, and it’s worth the detour to this less-visited but scenic stop. A small caf offers sandwiches, or you can take your own for a lakeside picnic. Kids and kids-at-heart like to climb a massive rock pile on the lake’s shores.

The Canada Parks Service offers displays and lots of helpful information at its visitors center at Lake Louise Village. From there, it’s easy to branch out. Just a few minutes along the Trans-Canada Highway and over the mountain is Yoho National Park, B.C., joining the west boundary of Banff National Park. Here you can see long trains winding along the mountainside and in and out of the Spiral Tunnels.

A turnoff to the Kicking Horse Campground and an 8-mile drive along the road end at Takakkaw Falls. You can hear their roar from the parking lot, but a paved path takes you closer to the falls – and the refreshing mist they produce in their 800-foot drop. 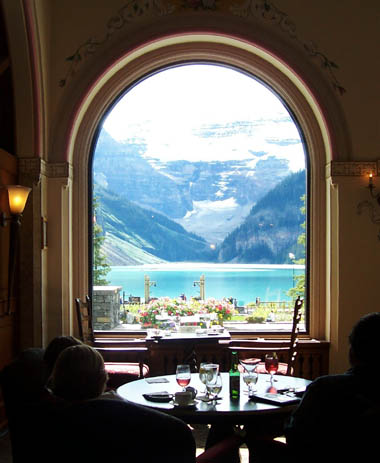 The glacier and its turquoise-blue lake are seen through a restaurant window in the elegant Chateau Lake Louise.

From the same place where the roads converge near Lake Louise Village, the Icefields Highway heads north toward Jasper, the Columbia Icefields, and Athabasca Falls. But even a shorter excursion partway along the highway yields worthwhile sights.

A trail at Bow Summit leads to a point overlooking that same crystal-blue water in Peyto Lake far below, with a backdrop of U-shaped glacial valleys and pine-covered mountainsides. Tall pines and new growth line the trail, fragrant after a brief rain shower. 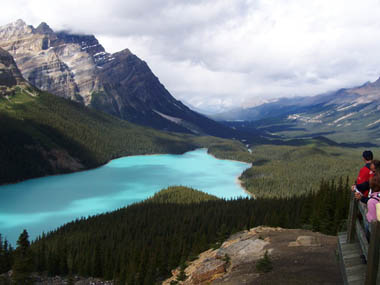 A fragrant forest path leads to the Bow Summit Overlook, with Peyto Lake shimmering below.

Another 20 minutes on, water carves through the rounded walls of Mistaya Canyon. En route, receding glaciers and the last traces of snow tucked in crevices are still evident on the mountainsides.

The combination of cool, refreshing air and eye-popping vistas always makes us want to come back. 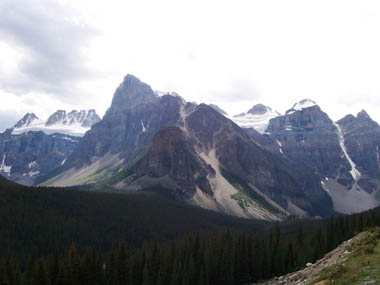