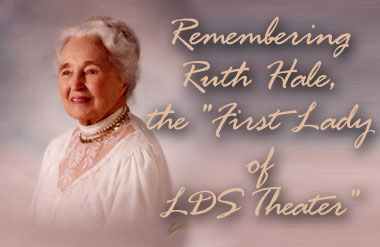 I listened intently as the Salt Lake City TV News broadcasts aired the story Sunday night that Ruth Hale had died on Easter Morning at the age of 94, of complications following a stroke.

This will not be Ruth Hale’s obituary. For that you can follow this link to the Deseret News. click here

There you can find all the facts and figures about her life – the many achievements and awards that she and her husband Nathan received in their lifetimes, and the wonderful legacy of her extended family of almost 200 living descendants.

But what I’ll remember about “Grandma Ruth” is her sparkling smile, and the twinkle that was always in her eye. I’ll remember her infectious laugh, her enthusiasm for life, and her gracious attention given to every person she met, from General Authorities to little school children. For her, the term “Latter-day Saint” meant more than a title of Church membership. It was a description of her character and her life.

Ruth Hudson grew up as a farm girl in the Salt Lake City suburb of Taylorsville, Utah, then went to the University of Utah and got a teaching certificate because that was a respectable profession that pleased her parents. But what she really wanted to do was to act.

After serving a mission in the eastern states, she met and married Nathan Hale, who shared her love of theater. During World War II they heard that Hollywood had a shortage of leading men and they moved their four kids to California so Nathan could break into the movies.

Instead of becoming disillusioned when the hard realities and rejection of Tinseltown brought their first dream crashing down, they decided to start their own theater, where no one could fire them or dictate the kind of roles they would play. Their “G-rated” brand of
entertainment appealed to a surprisingly wide audience, and over fifty years and several theaters later, they’ve created one of the most successful community theater dynasties in the world. The culmination of their careers was the building of the state-of-the-art Hale Center Theater in Taylorsville, just a few hundred yards from where Ruth used to act out scenes in the family barn as a girl with only chickens as her co-stars.

In Salt Lake, the only cultural venue that out-draws their theater is the Utah Symphony.

She loved writing as much as acting, and wrote more than 70 plays. Some of them have been widely distributed commercially, and one was produced for the Kraft Theater on television. Two of her plays, “The Girl Who Came to Dinner” and “Are the Meadowlarks
Still Singing?” are performed in their theaters at no charge on Sunday evenings in a “fireside” setting as a missionary effort for the LDS Church.

In 1980, Nathan and Ruth Hale were called on a full-time mission to Nauvoo. “We were sent there to bring the old cultural hall back to life,” she says. “We acted as guides in the daytime and then did little five-minute mini-skits.” They also produced some of their full-length plays. “That gave us an opportunity to bear our testimonies to people.

I was but one of many to whom Ruth was a great friend and example. I first met the Hales in 1970 when I was working at the BYU Motion Picture Studio as a student.
Ruth and Nathan have appeared in numerous LDS Church and BYU films. Seven years later when I founded the Associated Latter-day Media Artists (ALMA), Ruth supported our young organization of LDS media professionals by offering the use of the Glendale Centre Theater as a meeting place. She was a valued member of our Board of Directors for many years. Ruth and Nathan were among the first recipients of our “ALMA” award for positive use of the media.

In later times, Ruth and her family performed acts of Christ-like friendship and service to me and my own family members in a time of need. Their kindness will never be forgotten.

The legacy left by Ruth and Nathan (who died in 1994) is already being carried on by their descendants. The Hale theaters in Glendale, CA, Grover, UT, Taylorsville and Orem are run by their children and grandchildren. A grandson, Kurt Hale, founded Halestorm Entertainment, the film company that produced The Singles Ward and The RM. Another grandson, Will Swenson, had the starring role in The Singles Ward.

And the legacy extends beyond the Hale family. They have set a standard of personal values in an industry not known for that kind of thing. They have “marked the path and led the way” for others to follow. Generations of LDS theater and film people to come can find positive role models in what Ruth and her family have accomplished.

Brigham Young was reported to have said that if he were to find himself on a desert island and given a commandment to teach its inhabitants the Gospel, the first thing he would do is build a stage. And I’ll bet that if Ruth were around she’d be glad to fill that stage with actors and write lines for them to speak! (I can imagine she’s now on the other side of the veil talking with Brother Brigham about that very thing!)

Ruth once remarked: “I’ve said I wouldn’t mind dying on stage. But, it would be a little hard on the actors. They’d have to ad-lib.” Well, Grandma Hale we’ll just have to keep on ad-libbing until Act Three begins and we see you again.

As I reflected Sunday evening on the announcement of Ruth’s passing, I wrote the following personal tribute that I’d like to share here:
==========
To Ruth Hale, with love and affection:

Shakespeare wrote:
“All the world’s a stage,
And all the men and women merely players,
They have their exits and entrances,
And one man in his time plays many parts,”

Grandma Ruth, you must have surely agreed, for you played more parts than most.

Wife, Mother, Grandmother and Great-great grandmother,
Teacher, Helper, and Friend…
Besides all those other parts you wrote and played on the “Hale Center” stages
that gave us smiles, laughs, and tears,
and even moments of insight and inspiration.

Now that you’ve had your final curtain call in this mortal realm,
Your last exit here is but an entrance on a much grander stage
where Nathan, your Leading Man, has been anxiously awaiting your cue.

Join him now, and receive the bouquets and roses,
from your many adoring fans
and The Great Director will surely say,
“Well done, thou good and faithful servant.”