Traffic as the Test of Christian Character | Meridian Magazine

Traffic as the Test of Christian Character 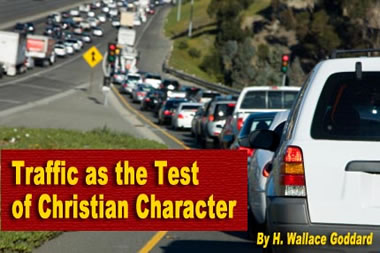 The shortest route to work from my home takes me along Arkansas Highway 5 – which carries a lot of traffic. The traffic moves well until the highway approaches an overpass. At that point the right lane goes to a freeway entrance that leads away from town, and the left lane goes over the freeway to the entrance that leads toward town. Most of the morning traffic goes over the overpass.

Every morning most of us dutiful citizens wait in line in the slow-moving left lane waiting for our turn to go over the overpass. Every morning many marauders take the relatively empty right lane and shoot past the blocks of patient drivers and cut into line at the front of the left lane.

This behavior energizes the natural man in my soul. I fume. Is their time more precious than anyone else’s? Are they more important than the rest of us? I often wish the thoughtless drivers could be given an extended timeout – maybe one minute for each person who was slowed by their thoughtlessness. I would like them to be punished for not playing well with others.

Driving is a magnificent test of our Christian character. We are generally quite anonymous, we have lots of power, and we are fully goal-directed. If anything will demonstrate our spiritual maturity, I suppose that driving will.

The scriptures do not provide a full theory of driving as a test of Christian character. Despite that fact, let’s see if we can identify three stages.

Barbarians have the nasty habit of taking what they want. They do not care about rules or courtesy; they are focused on themselves and their needs. It seems that many of us become barbaric when we drive.

Stop signs and traffic lights are treated like weak suggestions from babbling parents. Speed limits are only suggestions for people less capable than we.

Now, after decades of driving, I finally asked myself why it was all right to break the speed limit at all. I finally go the speed limit.  I make a complete stop at stop signs. And I try not to run red lights. (Maybe I will fully conquer this one in the spirit world.)

Having largely conquered simple obedience, I now struggle with a different challenge.

The Pharisees were miserable in their slavish obedience and they wanted everyone to be as miserable as they. So they pounded people with the law. They judged, condemned, and belittled those who did not follow the laws with exactitude – or anyone who didn’t follow the law the way they understood it. As a result, they exemplified self-righteousness. They became poster boys for artificial righteousness.

I suppose that’s where I have been with my personal obedience and steady annoyance with other drivers. I am a driving Pharisee. I obey the law and I am condescending toward those who do not.

I have tried giving end-runners and bad drivers the benefit of the doubt. My aging Grandpa didn’t realize he was substantially exceeding the speed limit. Maybe that young woman was late to a critical appointment. I remember when I was a frisky driver. Despite these efforts at compassion, I still find myself irritated with those who take traffic privilege while disregarding laws and other drivers.

I do not have scientific data to support my observations about state contrasts; I only have our experience. When we lived in Alabama, we were surprised at the way drivers let other cars into lines. They exemplified sharing and taking turns. We experienced the same wonderful phenomenon in many communities of Alabama during the six years we lived there. Yet, every time we returned to Utah, it seemed that a Utahn would rather die in a fiery crash than give way in a line of traffic. The gospel may change hearts – but only until we get behind the wheel of a car. Then we become ruthless Pharisees.

The Lord’s counsel to His disciples may apply to driving: “Behold, I send you forth as sheep in the midst of wolves: be ye therefore wise as serpents, and harmless as doves” (Matthew 10:16). Our challenge is to drive sensibly while carrying our Christian goodness to the task.

Even if others around us are viewing the speed limits as mere suggestions, we can follow the laws of the land and drive safely. We can be considerate and helpful to other drivers along the way. If someone is trying to merge into traffic, we can be the ones who allow them to pull in ahead of us. We can govern our thoughts and remain charitable and peaceful even while others are less considerate in their driving habits.

Jesus was probably not thinking of the modern freeway when He gave His challenging command; yet it certainly applies to our driving: “Love your enemies, bless those who curse you, do good to those who hate you, and pray for those who spitefully use you and persecute you” (Matthew 5:44). Traffic provides regular opportunities to apply this counsel.

When the Lord counsels against anger, He warns that, “Whoever says, ‘You fool!’ shall be in danger of hell fire” (Matthew 5:22). Yikes! Hell may be packed with a lot of angry drivers!

Why Does This Matter?

So how does driving relate to our spiritual maturity?

We are asked the challenging question in Alma 5:14:

And now behold, I ask of you, my brethren of the church, have ye spiritually been born of God? Have ye received his image in your countenances? Have ye experienced this mighty change in your heart?

I suspect that if we have truly experienced a mighty change in our hearts, we would not compartmentalize our commitment to following the Savior’s example. We understand that our simple, hour-to-hour acts reveal our character as much as our big decisions. Perhaps the way we treat fellow drivers is more revealing of our spiritual development than the earnestness with which we bear our testimonies. Our driving is not as important as our service and faithfulness but it is a measure of our spiritual development.

When Jesus requested that we “love one another, for by this shall all men know that ye are my disciples, if ye have love one to another,” He did not provide an exception for those who cut in front of us in traffic or otherwise irritate us throughout our day.

I look forward to the day when I can gladly help other drivers along the way while obeying the law consistently myself. In the mean time, I am taking a different route to work so I don’t “get tempted above what I am able to resist.”

Many thanks to Barbara for her insightful additions to this article.