The Presidential Candidates and Family Values - Where Do They Stand? | Meridian Magazine

The Presidential Candidates and Family Values – Where Do They Stand? 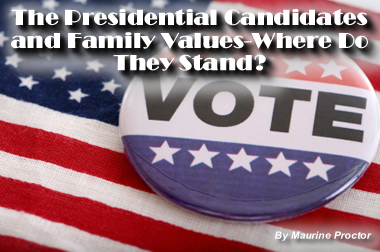 To stay updated on issues that affect your family and religious freedom, subscribe to free emails from Family Leader Network by clicking here.

Editors’ Note: Six weeks ago we published this article, a scorecard on the candidates’ stands as to family values. Now, as we approach Election Day, less than one week from now, we publish this again so you can be intelligent and informed on your vote for President. A letter from the First Presidency dated September 11, 2008 on political participation has been included at the end of the article.

We are in the midst of a presidential campaign between two candidates whose vision of America is vastly different, and we are bombarded every day with discussion about their relative merits. However, ironically, while we may know details of their personal history or whether pigs or pit bulls wear lipstick, what is often conspicuously missing is where they stand on some specific issues that will greatly impact your family.

Over the years we’ve had a few letters from readers who chastise us at Meridian for discussing anything political. However, from the inception of the magazine nine and one-half years ago, we have tried to keep a finger on the pulse of current events and look at them through a lens of LDS values.

We all live in a world that is not only vastly different from our moral standards and world view, but it is spiraling away from us at a dizzying rate. How to negotiate through these currents bring up critical topics for all of us, and we don’t always see things the same. Discussion, education and information help us each clarify our own thinking.

The magazine was named Meridian for two reasons: the meridian is the highest point of light, but also meridians on the globe take a measure of the world.

From the beginning, Meridian has sought to take a measure of the world, specifically bringing up issues that affect the moral foundation of our society and that impact family, and religious freedom.

We hope these scorecards will be useful information as you contemplate your voting decision.

The Family Research Council has researched both candidates extensively, including their comments, their former votes and news reports to compile a voter scorecard on where John McCain and Barack Obama stand on family issues. It is a highly-detailed voter guide that drills down “on the issues important to the family so as to discover not only a candidate’s position, but the depth of that position.” Footnotes and reference guides are given for further reading.

This scorecard certainly does not claim to cover every family issue, but does look at many of the ones that are or will be considered by the government. Though, in this scorecard, questions about poverty are not directly asked, by far the most significant influence on whether a child will grow up in poverty is his or her family structure. Children who grow up in intact families with married fathers and mothers are much less likely to experience poverty.

You can download a copy of this scorecard by clicking here . To see it requires a simple registration.

Here’s a sample of the questions and positions:

Would you support a federal law prohibiting both human reproductive cloning and cloning for research?

Do you support Medicaid-funded abortions?

Would you support or oppose a federal parental notification law before a minor receives an abortion?

Would you fight to protect the integrity of federally defined abstinence-until-marriage education?

Do you support a U.S. constitutional amendment to define and protect marriage as the union of one man and one woman?

McCain: No
Obama: No

If you do not support a U.S. constitutional amendment to define and protect marriage now, would any of these hypothetical future circumstances allow you to support such amendment?

*if one or several state supreme courts require their states to recognize same-sex marriages from another state.

*if the U.S. Supreme Court requires states to recognize same-sex marriages from another state (thus overturning a provision of the federal Defense of Marriage Act)

*if the U.S. Supreme Court requires the federal government to recognize same-sex marriages and/or partnerships for any purpose under federal law (thus overturning a provision of the federal Defense of Marriage Act)

*if the U.S. Supreme Court rules that same-sex marriage is a right under the U.S. Constitution

The Federal Defense of Marriage Act (1996) declares marriage to be the union of one man and one woman for all purposes of the federal government and declares that states do not have to recognize same-sex marriages from other states. Which of the following describes your position on the federal DOMA?

*I would support repeal of the provision of DOMA that defines marriage as the union of one man and one woman for all federal purposes, thus freeing the federal government to give marital benefits to same-sex couples.
— Obama

*I would support repeal of the provision of DOMA that declares states do not have to recognize same-sex marriages from other states, thus leaving courts free to require such recognition under the Constitution’s “full faith and credit” clause.
–Obama

Which of the following comes closest to your position on the Employment Non-Discrimination ACT (ENDA) which would grant federal civil rights protection on the basis of sexual orientation?

*I would veto any bill to provide federal civil rights protection on the basis of sexual orientation.
–McCain

*I would sign a bill to give federal civil rights protection based on sexual orientation and “gender identity”.
–Obama

Which of the following comes closest to your position on the proposed federal “hate crimes law, which would allow the federal government to prosecute any “hate crime” anywhere in the country?

*I would veto any federal “hate crimes” law, and leave prosecution of such crimes to state and local authorities.
–McCain

*I would sign a federal hate crimes law that included protections based on sexual orientation and “gender identity.”
–Obama

Neither candidate has been aggressive in pledging to see that obscenity is prosecuted aggressively through the Department of Justice.

Another scorecard on the presidential candidates that also gives links to both the Republican and Democratic platforms is here . Please click through and see the statements from each party’s platform and how the candidate measures up based on your values.

We also include the statement issued by the First Presidency on September 11, 2008 concerning political participation which was read in all Latter-day Saint congregations throughout the United States:

Political Participation, Voting, and the Political Neutrality of the Church*

As citizens we have the privilege and duty of electing office holders and influencing public policy. Participation in the political process affects our communities and nation today and in the future.

Latter-day Saints as citizens are to seek out and then uphold leaders who will act with integrity and are wise, good, and honest. Principles compatible with the gospel may be found in various political parties.

Therefore, in this election year, we urge you to register to vote, to study the issues and candidates carefully and prayerfully, and then to vote for and actively support those you believe will most nearly carry out your ideas of good government.