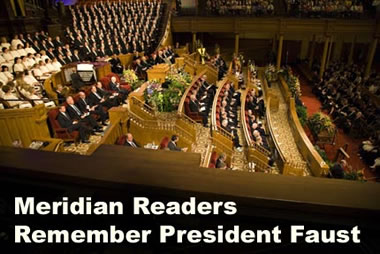 Editor’s note: Meridian readers were asked to share their memories of President James E. Faust. They remembered him as a kind and gentle man who touched their lives in an individual way. Here is what they had to say.

I am a professional genealogist and had the opportunity of searching for President Faust’s family for him. We discovered that his great-grandmother was Mary Elizabeth Moore Akerly, the first wife of John Akerly, where he previously thought Jane Robinson Akerly (the second wife) was the mother of his grandmother Elsie Ann Akerly. He spoke about this discovery in the October 2004 Priesthood Session of General Conference.

A week after the conference I suggested to him that we should obtain a copy of the patriarchal blessing of Mary Moore Akerly ? a document no one, including President Faust, had seen since it was given in 1843. A few days later we read this original document.

Hyrum Smith had come to the Akerly home in Iowa, and provided John Akerly and then his wife with blessings. The original historical document acknowledges Mary Moore Akerly as being very ill in bed, and in the blessing President Hyrum Smith prophesied that Mary Moore Akerly’s name would be remembered through all generations of time by the “Priesthood of her Posterity.”

Hyrum Smith couldn’t have known that John Akerly would die a few years later at Winter Quarters, or that Elsie Ann would even grow to adulthood ? much less know of his own accord that Mary would be remembered because of the testimony of her priesthood-holding descendants. President James E. Faust was that priesthood-holding descendant, even a prophet and apostle of God, when he fulfilled President Smith’s prophecy in October 2004.

I first met President Faust when he came to Waterton Lakes National Park shortly after he became an assistant to the Twelve. He came as a guest of Dr. Coombs to play golf.

I was the summer pro and I had the privilege to visit with him before and after his game that Saturday afternoon. He remarked how much he loved to play golf and also commented how very beautiful Waterton Lakes was.

In that short time, I sensed that President Faust was a man of unusual faith, of humour, of integrity, of love of his fellowman and a love for the Gospel of Jesus Christ. Thereafter, whenever I corresponded with him, he always answered with a loving Spirit. I will miss him as will all who knew him. We love President Faust.

Some years ago our family was gather together playing “Scattergories.” The category was “religious leaders” and the initial letter “F.” My teenage niece came up with the answer “Faust.”

Our son-in-law, recently returned from studying abroad and knowledgeable about German literature, objected. “I don’t think you can call Faust a religious leader,” he protested. “A philosopher, maybe, but you know he sold his soul to the Devil!”

I regret that I never had the chance to tell that story to Elder Faust.

I think he would have had a quiet chuckle.

In 1992, Elder Faust presided at a stake conference in Springville Utah that I was privileged to attend. He bore a powerful witness of the Savior that I have never forgotten. In the Saturday evening session of conference, he said these words: “I am as the brother of Jared, who has faith no longer because I know that Jesus is the Christ.”

He indeed was a special witness of the Savior and his calming, steady voice will be missed.

It was probably about 20 years since I had last seen President Faust, when one day I was in an elevator at the Church Office Building. There he was and he recognized me. He had met thousands of people by that time, so I was very impressed with his memory.

At a regional meeting held in the tabernacle seven or eight years ago, President Faust spoke to our several stakes. After his remarks, the conducting authority asked Sister Ruth Faust to share a few brief remarks. She told us that President Faust confessed to her that whenever he stood to speak, there was a little man at the back of the room who would throw balls of cotton into his mouth.

I thought that pretty much summed up the dilemma of the orator whose nervous mouth was too dry to speak.

My father, J. Duffy Palmer, practiced law and became friends with Jim Faust. I served a mission in Brazil when Elder Faust was the Area President 1974-1976. My parents came to tour my mission with me at the end of my mission. We were in the Hilton Hotel when the phone ran. I answered the phone because I assumed someone would be speaking Portuguese on the other end. Instead the caller said, “Duffy, this is Jim.” I handed the phone to my father.

Elder Faust invited us to have family home evening with Ruth, his dear wife, and him. We had a great evening where he also had a set of missionaries there. I shall never forget the warm feeling as we shared time with such a great man and his dear wife, Ruth.

I will miss President Faust’s address at the First Presidency Christmas Devotional. I have always looked forward to, enjoyed, and been uplifted by his Christmas messages. I will surely miss them and hold them as a part of my special Christmas memories.

My husband, a recent convert, and I traveled to Orem to visit my grandson, returned missionary Jared Barrera, and his wife, Tanya. They took us on a visit to Temple Square.

We were walking back to our car after spending all morning in the Square and having lunch in the Joseph Smith Building. Jared looked up the street toward the temple, and said there was someone we just had to meet. I looked and saw an elderly man walking toward us. When he got close to us, Jared introduced him as President Faust.

Jared introduced me as his grandmother, and President Faust said, “Oh, Jared, you must mean your sister, she’s not old enough to be your grandmother!”

I’m known as the “hugging sister” in our ward, and I automatically reached out and gave President Faust a hug. He hugged me back and then told Jared he must take us to see Brigham Young’s gravesite, then continued on with his walk.

Since it was such a hot day, we weren’t too excited about walking further and just wanted to get in the air-conditioned comfort of the car. But, Jared said that we must go visit Brigham Young’s gravesite ? we had been told to do so by an apostle! We did and enjoyed ourselves in the coolness of the wee little cemetary.

What a wonderful memory we have of our brief encounter with President Faust.

Some time ago I was sent an e-copy of a talk by President Faust. I was inactive at the time and had been for a long time. President Faust’s talk inspired me to return to church. Earlier this year I received a reinstatement of blessings.

Thank you for the privilege of writing about President Faust.

President Faust will be ever so missed in our household. His wisdom is full of love, power, strength for us in the mission field, especially.

We feel ever so blessed to be able to say, “We knew him,” though only through the media.

Our love and condolences go to his family, and all of our great general authorities.

When President Faust shed tears at the dedication of the Nauvoo Temple, I knew he was a good and faithful man. I enjoyed his humility in the service of the Master and of his disinterest in the materialism of the world. Although he claimed to be ordinary, he was far from being just an ordinary man; he truly was a special witness of the Savior.

I am from the San Diego Fourth Ward in beautiful, sunny San Diego, California.

President Faust was one of the humblest men I have seen in person. I attended general conference in April 2004 with my husband. We fell in love with beautiful Salt Lake City. I had lived there in 1977-1979, so I knew the spiritual manifestations that happened when I lived there, were real.

President Faust was a wonderful speaker and a wonderful example of how a man can be who God wants him to be. He was stalwart and brave as he fought the many health problems he had.

He once said something about “in the face of adversity he always turned to Heavenly Father. I know this man was a seer, and wonderful friend, father, husband and grandpa to many of God’s children. He exemplified his callings and was a very honest speaker and humble servant of God’s.

The way he worded his comments when talking in the many sessions of different conferences was totally awesome. It was an honor, blessing and spiritual event seeing him in person. He was quite inspirationally led. He honored President Hinckley, President Monson, and everyone he met.

I don’t believe he ever discriminated against anyone ? man, woman or child. His love was a celestial Christ-like love for Heavenly Father and everyone he met or spoke to in conference. I felt as if he was speaking directly to only me.

I’ll be reading each talk he gave, a little at a time. He was magnificent in the way he delivered each talk. He didn’t preach; he spoke with a humble heart and testimony that Christ is the son of God.

When I was a youth about 14 or 15 in the late 1980s, President Faust (then Elder Faust of the Quorum of the Twelve) visited our stake conference in Walnut, California. I was asked to be the youth speaker during the Sunday morning session.

I’ll never forget sitting on the stand, hearing Elder Faust speak powerfully about the Holy Apostleship, with the Spirit attending. After the session was over, I met him in the hallway, where just the two of us stood. He graciously complimented me on my talk and said I “preached like a missionary.”

His encouraging words and gracious compliment have been precious to me over the years. I’ll never forget them as long as I’ll live. He didn’t have to take the time to speak with me and be so kind; I was just a youth and didn’t particularly warrant any special attention. But that’s the kind of person he was ? kind, thoughtful of others, and always encouraging. I’ll ever be grateful for President Faust.