One Giant Dino Nose to Rule them All | Meridian Magazine 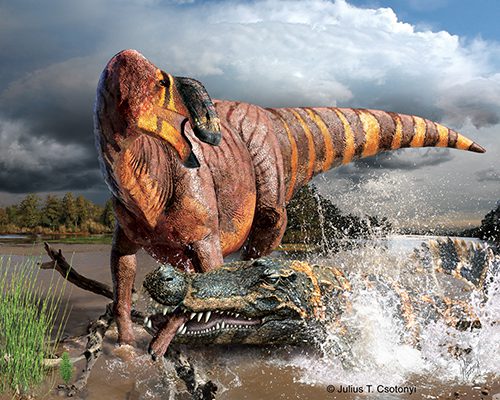 One Giant Dino Nose to Rule them All

Utah may be known as the Beehive State today, but approximately 75 million years ago, it was home to a more “nosey” creature.

Meet the Rhinorex condrupus, whose large schnoz gave rise to a name that means “Nose King.” This duck-billed hadrosaur dwelled in what is now present day Utah during the Late Cretaceous Period and is described by paleontologists from Brigham Young University and North Carolina State University in a new study.

“This dinosaur has huge nostrils,” said Rodney Scheetz, curator of BYU’s Museum of Paleontology. “The skull has huge narial openings, but we can only guess what the soft tissue looked like.”

Researchers can’t tell just what the benefit of the large nose was to this dinosaur, although speculation includes social purposes such as identification or attracting a mate.

The specimen originally caught the attention of paleontologists for its well-preserved skin impressions. After a more careful assembly of the fossils, the researchers discovered that they were working with a completely new species.

“Skin impressions are one of the most valuable things because they are extremely rare,” Scheetz said. “A lot of the dinosaur itself is yet to be prepared because we haven’t figured out a way to prepare the rock off the bones without ruining the skin impressions.”

The dinosaur, estimated at 30 feet in length and 8,500 pounds, lived in swampy areas and was an herbivore.

While most hadrosaurs can be uniquely identified through a bony crest protruding from the skull, the crest-less Rhinorex compensates with its huge nose.

BYU paleontologists excavated the specimen from the Neslen Formation high above the slopes of the Book Cliffs. Helicopters from the National Guard ferried the extracted bone and rock down the mountain.

The discovery of this particular dinosaur allows researchers to understand more about the time period in which these dinosaurs lived. Scheetz’s paper on this discovery, co-authored with Terry Gates from North Carolina State University, can be seen online in the Journal of Systematic Paleontology.

The BYU Museum of Paleontology houses a large selection of fossils gathered from locations in Utah, Colorado, Montana, and Wyoming. The museum provides hands-on learning to university students as they work on several different projects throughout the year.

“We’ve got three different buildings that contain these bones. We’ve got, as I call it, the Costco of dinosaurs,” says BYU paleontologist Brooks Britt. “Students have the chance to go out in the field with us to collect the materials, to work in the lab, and to work on describing these things with us.”

BYU has a long history of finding and naming new dinosaurs. One of the more recent cases was Britt’s discovery of the Abydosaurus, which belongs to the group of gigantic, long-necked, long-tailed, four-legged, plant-eating dinosaurs.