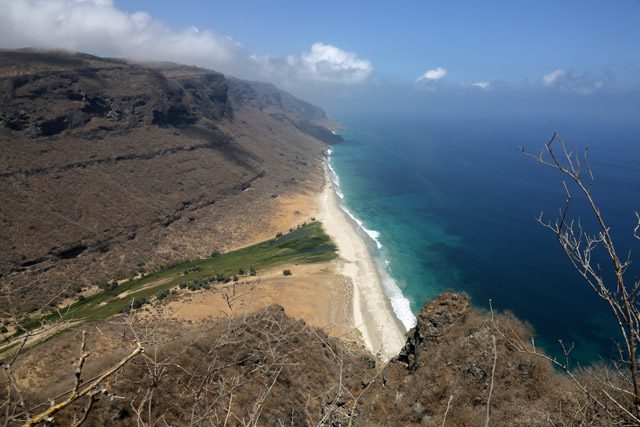 It Can’t Be Nephi’s Bountiful without These 12 Criteria

In the next days Meridian will take you in photo, words and video to the best candidate for Nephi’s Bountiful for an adventure and an archaeological investigation that you’ll never forget. If you missed the first article in the series, please click here.

No location in the Book of Mormon is given with such vivid and comprehensive detail as Nephi gives us of the place where he built his ship. Any place that could possibly be a candidate for Bountiful has to meet every criterion. If it misses on any, it can’t be the spot.

What makes his description so useful, is that while we know it is in Arabia from every thing else he tells us of the journey—it doesn’t sound like Arabia at all. Not even close.

People in the United States knew almost nothing of Arabia in Joseph Smith’s day, but as this world of sun and sand opened to Western eyes, it seemed clear—there was no wooded beach by the seashore where an ancient prophet could build a ship. Not even the wildest fiction writer would create such a fantastic landscape for Arabia, but here was a prophet, translating a book of scripture, that said this place had to exist.

Twenty-five years ago, Warren Aston systematically evaluated the Book of Mormon for every mention of Nephi’s Bountiful and began to put together a list of what the place had to have in order to qualify as the place. He then combed the seashore in both Oman and Yemen to see if there was possibly a fit.

Because of the barrenness of Arabia, the field was quickly narrowed. In fact, based on just one criterion alone, the possibilities contracted quickly to five candidates. It had to be a place with a substantial year-round fresh water source and wadis are usually dry riverbeds that flow at most only a few days a year.

Thus, none of the five met all criteria except one—an isolated place called Khor Kharfot on the sea where a wadi, called Wadi Sayq, flowed with year-round fresh water. This has been occupied by various groups of people in the past, but is now empty except for the occasional Omani who wanders through. Khor Kharfot is the best candidate for Nephi’s Bountiful, but in fact, we can’t find another that could fit.

So here is the list of 12 criteria for Nephi’s Bountiful compiled and commented on by Warren Aston:

1.The location of Bountiful is directionally linked to Nahom. Bountiful lay “nearly” eastward of Nahom (1 Nephi 17:1). Here, Nephi used the same wording he had earlier used in describing the travel direction from the Valley of Lemuel (“nearly a south-southeast direction,” 1 Nephi 16:13, 14, 33). Given his ability to accurately determine variations from the cardinal directions we should therefore expect that Bountiful lies close to the 16th degree north latitude of Nahom.

Surprisingly, the clear-cut implications of this basic and unequivocal scripture continue to be ignored or understated by some commentators on the subject, years after the location of Nahom had been firmly established. Such writers still depict the route from Nahom to Bountiful as anything but the “nearly eastward” direction Nephi recorded, defying also geographical and historical realities.

3.Nephi’s usage of the name “Bountiful” suggests that a wider, general area (1 Nephi 17:5, 7) may have enjoyed notable fertility in addition to the particular location where the Lehites initially camped (1 Nephi 17:6), making any candidate location for Bountiful without a comparable surrounding fertile area less likely.

4.Bountiful, logically on the east coast of Arabia, was a coastal location (1 Nephi 17:5), suitable for an initial seashore encampment in tents (1 Nephi 17:6) but also with shelter available on higher ground in more substantial dwellings. It had to also offer a suitable place for the construction and launching of a sizable ship (1 Nephi 18:8). Large vessels cannot easily be constructed over a year or more on a beach exposed to monsoon storms; in ancient times the only practical solution was usually the shores of a sheltered inlet or lagoon that protects from tides and storms while still allowing ready access to the ocean.

The sea by Khor Kharfot.

5. Bountiful was much more than just a suitable place to build and launch a ship; it derives its name from its fertility, especially its “much fruit” and honey (1 Nephi 17:5-6, 1 Nephi 18:6) and perhaps also small game that could be hunted (1 Nephi 18:6). As noted later in item 11, the strong likelihood is that Bountiful was uninhabited when Lehi arrived; this would require that the fruit mentioned was not cultivated but grew wild.

This is fig tree growing at Khor Kharfot.

The Hebrew term for “fruit” normally refers to edible fruit and Nephi’s use of the singular “fruit” may imply that there was not necessarily a great variety of fruits. The apparent immediate availability of fruit upon arrival may explain the lack of any mention of the growing of crops at Bountiful by the group – unlike the description of their later arrival in the New World (1 Nephi 18:24). However, some agricultural and fishing pursuits for addition food during the years of their stay at Bountiful are certain. The group’s camels, of course, could still provide milk, hides, hair and meat throughout their time at Bountiful.

6.Enough shipbuilding timber of types and sizes to permit building a vessel able to carry several dozen persons and remain seaworthy for at least a year were available (1 Nephi 18:1, 2). While teak was imported from India for shipbuilding innorthern Oman since about the third millennium BC, the clear implication is that this place “prepared of the Lord” had all the materials needed for the ship without recourse to obtaining timber from elsewhere.

The wording of 1 Nephi 18:1 conveys the clear impression that the timber was at hand. It is also worth noting that Nephi uses the plural whenever timber is mentioned, suggesting that more than one type of wood was involved, as is usual in shipbuilding.

7.Year-round freshwater at the site is required by the flora described. It would also have been necessary for the extended stay required by the group to construct the ship without diverting significant energy and time to carrying it in from elsewhere.

A mountain and row of ancient stones at Khor Kharfot.

9. The incident of Nephi’s brothers attempting to take his life by throwing him into the depths of the sea (1 Nephi 17:48) makes little sense unless there were substantial cliffs overlooking the ocean from which to throw him. Cliffs typically have rocks at their base from erosion and would constitute a real danger to anyone falling on them from a height, whereas a sand beach would not, especially for a young man who is described as being “large in stature” (1 Nephi 2:16) and “having much strength” (1 Nephi 4:31), regardless of any lack of swimming ability.

10.Ore, from which metal could be smelted to construct tools, was available in the vicinity (1 Nephi 17:9-11, 16), perhaps with some type of flint (verse 11), seemingly near the ore source. While it remains possible that he carried some type of flint with him to make fire, his wording implies that it was available at, or near, the location of the ore source. Nephi does not specify the metal he used to make the hatchets, adzes, chisels, twist-drills, hammers and so on needed, but an iron alloy seems the most likely.

Pieces of iron ore can be found at Khor Kharfot

11.Despite the attractiveness of the place, the 17th chapter of First Nephi is full of clues indicating that Bountiful likely had little or no resident population at that time that could contribute tools and manpower to the ship building process. Beyond the obvious fact that it required a specific revelation to show Nephi where ore could be found (1 Nephi 17:9-10), great effort was then expended by him to fashion his own bellows, locate the ore, smelt it and then manufacture the tools he would need. Such basic items could surely have been easily obtained by anyone living in or near a populated sea-port.

It is also clear from the record that Nephi needed the labor of his brothers and Zoram; a populated location would offer other sources of labor. Of course, Lehi could also easily have been directed to bring sufficient wealth from his estate in Jerusalem to purchase an entire ship, or commission the building of one had the group been headed for a shipbuilding area. While one could argue that the shipbuilding stage was part of their preparation for the New World, the group had already faced some eight years of difficult travel dominated by hunger and privation.

The more likely reason that they had to construct their own is that no vessels being built in that part of the world were adequate for a journey of the magnitude required. The continually dissenting Laman and Lemuel seem to have left Bountiful readily enough for a long and dangerous sea voyage, surely their first time on the open sea, when the time came.

This suggests that there was little at Bountiful either to distract them from assisting Nephi in building the ship or to entice them to remain. Eight years of encounters with mostly Arab peoples on their journey must have broadened their cultural outlook; had they been living some time in or near a thriving port, commercial opportunities for wealth would have surely appealed after years of desert privation. Living in or near a center for trade would have given them an easy opportunity to return to their beloved Jerusalem.

Finally, it also seems unlikely that Lehi’s group, at such a critical juncture in their journey, would have been intended to settle where they would be exposed to the pagan beliefs then prevalent in Arabia. Rather, the place “prepared” of the Lord may have been intended to keep them apart from other people for that very reason. However, the fact that any water source in Arabia attracts people requires us to understand why such an attractive place would remain uninhabited most of the time.

View of Wadi Sayq as it empties into the sea at Khor Kharfot.

12.Coastal conditions had to allow a ship access to the open ocean and to suitable winds and currents (1 Nephi 18:8, 9) which could carry the vessel in an easterly direction toward the Pacific coast of the Americas, as Alma 22:28 seems to stipulate when it mentions that the west coast of the land was the place of “first inheritance.” However, travel in an eastward direction from the Indian Ocean onwards appears problematic as the prevailing winds and currents generally restrict travel to a westerly direction. (A solution to this dilemma is discussed later in Warren’s book).

Warren Aston reminds us, “Such a detailed and comprehensive description of a locale is without precedent anywhere in the Book of Mormon narrative. None of the criteria are at all peripheral.”

This is why Meridian and The Khor Kharfot Foundation members feel compelled to study Khor Kharfot. The likelihood that this is Nephi’s Bountiful is high. The archaeological remains in the site from former occupations can give us a context for the world Nephi and his family knew and lived in that is unlike any other.

We’ve taken in an archaeological team and geologist in April of 2014 to lay the groundwork for a study that may take several years. A team of botanists are going to Khor Kharfot this coming late October.

Will you donate to help in this rare possibility? Even small donations help if they come from enough of us.Every dollar will go to onsite-research. And all donations are tax deductible. Just click here to add your money to uncover the secrets that Khor Kharfot holds. Thank you!