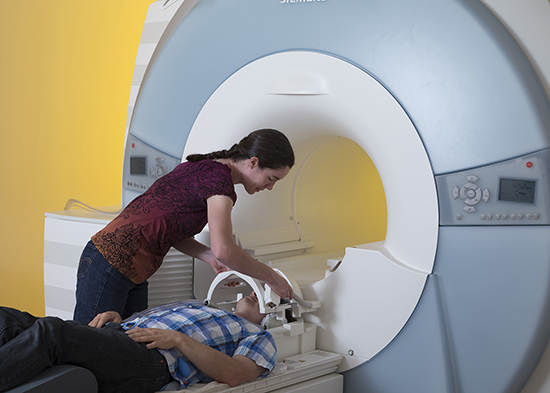 And thanks to the dreams of a BYU student, we now know more about where and how imagination happens in our brains.

Stefania Ashby and her faculty mentor devised experiments using MRI technology that would help them distinguish pure imagination from related processes like remembering.

“I was thinking a lot about planning for my own future and imagining myself in the future, and I started wondering how memory and imagination work together,” Ashby said. “I wondered if they were separate or if imagination is just taking past memories and combining them in different ways to form something I’ve never experienced before.”

There’s a bit of scientific debate over whether memory and imagination truly are distinct processes. So Ashby and her faculty mentor devised MRI experiments to put it to the test.

They asked study participants to provide 60 personal photographs for the “remember” section of the experiment. Participants also filled out a questionnaire beforehand to determine which scenarios would be unfamiliar to them and thus a better fit for the “imagine” section.

The researchers then showed people their own photographs during an MRI session to elicit brain activity that is strictly memory-based. A statistical analysis revealed distinctive patterns for memory and imagination.

“We were able to see the distinctions even in those small regions of the hippocampus,” Ashby said. “It’s really neat that we can see the difference between those two tasks in that small of a brain region.”

Ashby co-authored the study with BYU psychology and neuroscience professor Brock Kirwan for the journal Cognitive Neuroscience. Kirwan studies memory at Brigham Young University, and Ashby is one of many students that he has mentored.

“Stefania came in really excited about this project, she pitched it to me, and basically sold it to me right there,” Kirwan said. “It was really cool because it gave me a chance to become more immersed and really broaden my horizons.”

Stefania graduated in 2011 and is currently working as a research associate at UC Davis, where she uses neuroimaging to study individuals at risk of psychotic disorders such as schizophrenia. Her plan is to earn a Ph.D. in neuroscience and continue researching.

Each year several hundred BYU graduates like Stefania fan out across the country to Ph.D. programs at other universities. Mentoring is a large reason why BYU ranks so highly as a Ph.D. launch pad. According to the National Science Foundation, BYU ranks 5th in the nation for the number of graduates who go on to earn doctorate degrees.