LDS Fiction: ‘Hope’ According to a Dead Man 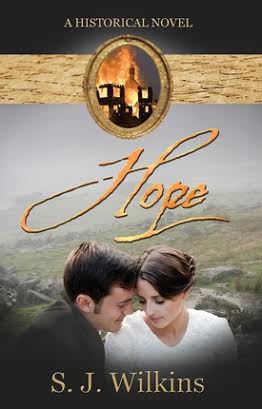 Hope by S. J. Wilkins is a Historical novel that takes place in England in the mid nineteenth century. It is told from two major points of view, that of Manny Shaw a twenty-one year-old factory worker in a remote village and his father, Isaac Shaw, who has been dead for sixteen years.

The Shaw family has struggled with shame and to support themselves since Isaac’s death as Isaac was determined to have been the cause of the fire that killed the mill owner’s wife and another woman. Manny and his brother Will both work at the mill and are responsible for their mother’s support. All three are grateful for the mill owner’s charity in paying them well and allowing them to work, though Manny was once severely beaten by Reeve, the mill owner, and resents his lack of a future and the refusal of everyone in the village to speak of his father’s crime and the village’s history. Both brothers are in love with the same young woman, Hope, the ward of a prominent farmer who lives near the village.

One day as Manny and Will arrive at the mill, Manny hears a voice that tells him to leave. He is hesitant to do so, but when the voice becomes more insistent, he does so. He tries to convince Will to go with him, but he refuses. As he walks away from the village, he meets a Mormon missionary who invites him to attend a meeting in the next town where he will be preaching. He goes back for Hope and they attend the meeting together. Afterward they are both baptized.

Their conversion sets off a series of events that brings conflict between the brothers, a near fatal attack on Hope’s adopted father, and a letter is entrusted to Manny concerning Hope’s identity, a letter that goes missing, resulting in lethal attacks on Manny and those he loves.

Hope is an unusual story in several ways. First the telling of part of the story from the point of view of a dead man who is a witness to what is happening is different. Then there’s the old Victorian writing style that, though it fits the story’s era, feels a little awkward to modern readers.

The characters are true to form for a Victorian era novel, but feel a little slow and incomplete for today. Hope and Manny’s mother are both rather bland characters and we never develop strong feelings for either. Manny spends too much time sleeping at crucial times or wallowing in indecision. His dependency on spiritual promptings often feels more like doing nothing followed by spurts of impetuousness. It’s hard to tell whether even the villain is evil or insane. Though real people have ambiguous and contradictory characteristics better character development could strengthen this story.

Stories concerning early conversion to the Church of Jesus Christ of Latter-day Saints are predictable to some extent and this one has some strong qualities as it also points out the continuing interest of the deceased in the lives of their descendents. It also portrays well the slow development of faith and the process of learning to believe and trust in God. The plot line is developed well, though I think the story could have been improved with some meaningful interaction between Hope and Manny.

The background for this story feels authentic, perhaps because the author lives in the area where the story takes place and where the first Mormon missionaries arrived, filled with exuberance to spread the gospel. S. J. (Seth) Wilkins lives in Chorley, England. He taught at Preston England Missionary Training Centre and has masters of Arts degrees in history and creative writing from the University of Lancaster.