BEFORE THE CLOCK STRIKES THIRTY by Aubrey Mace 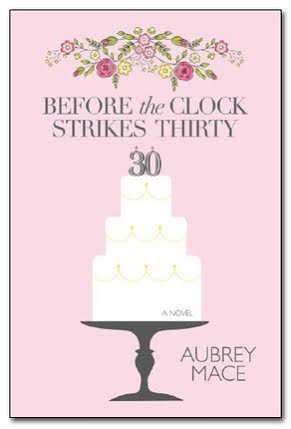 Once in awhile a book comes along that provides a much needed laugh. Before the Clock Strikes Thirty by Aubrey Mace is that kind of book. Ten-year-old Shannon is awe-struck by her friend’s assertion that her aunt is a gypsy, though the elderly woman looks nothing like the gypsies in Shannon’s favorite book. She’s also dreamy over weddings, so when her friend’s cousin becomes ill and she’s asked to stand in to serve refreshments at her friend’s older sister’s wedding, she’s beyond happy. When the gypsy aunt proclaims that before she’s thirty, Shannon will marry her soul mate, a man wearing a silk tie she will meet at a wedding reception, she couldn’t be happier.

Disaster strikes when the groom’s younger brother is rude to her and hurts her feelings, spoiling what had been a perfect evening. Years later the two meet again in a college choir class. Shannon remembers Nathan and his obnoxious behavior. He doesn’t remember her at all. They become good friends, but she refuses to date him. When he learns she’s holding out for the silk tie soul mate, he decides he doesn’t have a chance, but as her best friend he should help her find Mr. Right. Thus begins his dogged determination to take her to every wedding reception in Provo and even a few in Salt Lake. (That’s a lot of wedding receptions!)

Shannon and Nathan are fun characters. They’re stubborn, persistent, imaginative, and a little blind when it comes to truly seeing each other. She’s a dreamer with a soft spot for fantasy and happily-ever-afters.

The plot, as in most romances, is predictable, but the journey is filled with laughter, ridiculous situations, warm cozies, and exasperating realities. The author does an excellent job of building scenes then choosing just the right moment for the punch line. The story is set against the singles dating scene at BYU, Provo, and Salt Lake City. Her charming style invites readers to laugh with her as at an insider joke that is both tender and humorous.

“Aubrey Mace lives in Utah, but every winter she considers moving somewhere warmer.” She works in an infusion center and enjoys working with people, both the real ones and the ones in her head. She has won Whitney awards for Spare Change and My Fairy Grandmother. She was also nominated for her Christmas book, Santa Maybe.